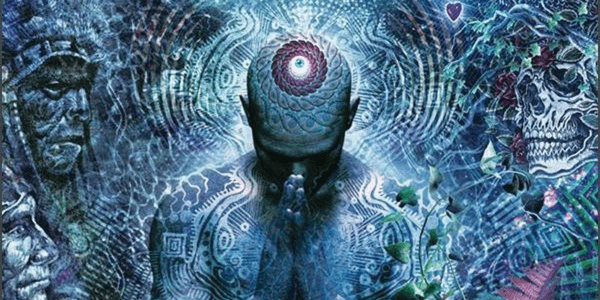 is a unique book discussing altered states of consciousness, including lucid dreaming and psychedelic use. David Jay Brown achieves a balance in providing credible research and anecdotal evidence, while making room for speculation about the significance of these psychic events.

It’s a fairly long read at over 350 pages (with extensive notes following the text), and it’s an ambitious one too. Brown really digs into questions surrounding lucid dreaming. Brown does a wonderful job of examining the phenomenon, including in-depth discussion of adjacent psychic phenomena including out-of-body experiences (OBE’s), near-death experiences (NDE’s), and remote viewing. It’s a fascinating exploration of what the human mind is capable of, and it expands a reader’s conception of how we can learn to expand our consciousness.

Brown discusses lucid dreaming in various cultures, contextualizing it on a continuum of psychic and paranormal activity that are considered commonplace in other cultures. He references Vajrayana (Tantric) Buddhism, the Bön religion (A shamanic Buddhist tradition which predates Buddhism, according to this text.), and shamanic traditions from Central America. Brown references shamanic traditions throughout, discussing how they make use of altered states of consciousness brought about by herbs, plants, hallucinogens and physical states induced by activities like meditation, chanting, spinning, fasting, drumming or dancing. The author feels his work is unique among other books that discuss lucid dreaming because of “…. a deeper exploration of the relationship between psychedelics, herbs, drugs, nutritional supplements, and lucid dreaming.”1The book is successful in that regard, and has a wealth of information on how to best facilitate lucid dreams.

Brown provides extensive notes and refers to a wealth of scientific studies. However, I did notice that he doesn’t distinguish between scientific studies and much smaller studies without much statistical significance. He provides a lot of data to back up unconventional ideas about dreaming and out-of-body psychic experiences. For example, he discusses research about brain hemispheres operating independently and seeming to actually monitor each other as evidenced by various research endeavours. There is a huge amount of research referenced in Dreaming Wide Awake, and the index at the back is wonderfully detailed.

There is an unusual technique the author uses wherein he introduces a topic, provides multiple instances of scientific or anecdotal evidence, and concludes by synthesizing the research to draw conclusions. He doesn’t stop at conclusions though, and goes on to speculate on further philosophical (and practical) questions that are suggested by the evidence he cites. There are examples of his speculations throughout the book, such as: “The soul may have a physical form, that our current science is yet unable to measure or detect. If this is correct, then it appears that the human soul weighs very little if anything at all, and can float upward freely when no longer attached to the human body, like a helium balloon.”2 and “Could the universe in fact be a giant nervous system, a cosmic brain, as the late psychologist Timothy Leary and others have suggested? And if the universe is a giant brain, is it alone, or are there others?”3

He relates a strange story that circulated widely online about a man who appeared to materialize from another dimension, commenting “[w]hether or not this story is true remains a mystery, as I couldn’t locate an earlier source for it, but it certainly can be a fascinating possibility in pondering the existence of parallel universes.”4 These passages stick out, in part because the book seems so meticulously researched that these speculative passages seem out of place. Of course, Brown is tackling dense and contentious material here, so it’s logical that he has theories and ideas that aren’t scientifically validated. At the outset, I found these conjectures grating, but by the end of the book I appreciated them. The author is clearly working from a place of profound curiosity, which translates through the work and affects the reader. What seems like rambling at first glance betrays a huge enthusiasm for the material at hand. In instances where research is lacking, he observes that he wishes he had access to more information, or that he would have loved to access a particular expert about some aspect of a question he is tackling.

A note about the anecdotal evidence he provides: If you don’t like hearing accounts of strangers’ dreams, you will find many passages quite dull. Not only does the author relay his own dream experiences and psychedelic explorations, he includes accounts of others’ experiences. Unfortunately, in many instances these accounts are drawn from online sources, such as message boards and lucid dream communities. I found these passages — the musings of random strangers about very personal dream experiences — difficult to read credibly. I think it would have been possible to synthesize these accounts without including them in this work. It’s likely that readers who are sufficiently interested in these types of first-hand accounts will seek them out online. Perhaps the author could have directed the reader to these online communities in appendices.

Nonetheless, there are excellent things here. Demonstrating the parallels between lucid dreaming and psychedelic experiences is very helpful. Legitimizing the use of psychedelics for mental exploration is very refreshing. The author is clearly a seeker, writing this volume for fellow seekers. He tells us that he is using his own life and experiences as a sort of lucid dreaming laboratory to promote psychic expansion and healing, and this journey appears to be a worthwhile endeavour. He documents how readers might go about promoting their own lucid dreaming skills, in a clear step-by-step manner. It’s gotten me back into the habits of meditation and dream journalling, which he describes as the first steps.

Dreaming Wide Awake has me exploring techniques to induce lucid dreaming, to pay attention to my own dreams, and to try some of the herbal dream inducers. It has also prompted fun and engaging discussion with friends about lucid dreams and psychedelic use. It’s the type of book that prompts you to want to seek out more information, but with the sense that you’ve already read the essential book on the subject. It’s an ambitious and authoritative book on a complex subject that will engage many interested readers.