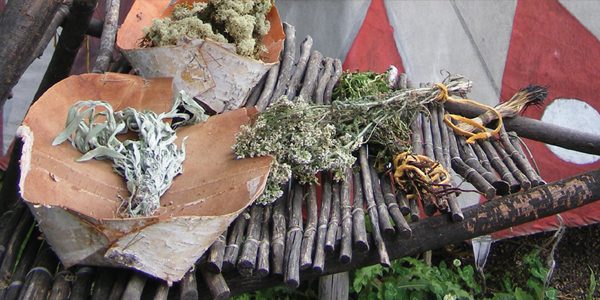 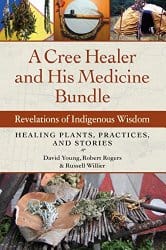 A Cree Healer and His Medicine Bundle: Revelations of Indigenous Wisdom, Healing Plants, Practices, and Stories is the result of a 2010 gathering of healers who agreed that Native medicine should be documented for future generations. It holds a first-hand account of Russell Willier‘s journey as a Cree Healer, his beliefs, practices, and stories, and a travel diary of an field trip through Alberta where medicinal herbs are collected and identified. The reader is provided with a study and a guide, and an overall sense of the importance of preserving these traditions.

Part One is written in Willier’s own words, sharing a glimpse into his work. He explains his worldview and cosmology, providing a medicine wheel diagram showing how various natural and human variables are systematically related, and explains how his beliefs come into play in his work. As a healer, he acts is an intermediary between humans and Spirit Helpers, who are intermediaries between the healer and the Great Spirit.”1 It’s the job of the healer to channel the assistance to those who have requested it and approach the healer correctly by use of herbs, psychological counseling, ceremonies, and prayer.2

Willier writes, “God gave us plants to use. We use plant combinations that have been around for centuries. In the last century, we have been using Western medicine because the government banned Native medicine. There were times when medicine people had to go underground and hide while they helped people.”3 As a result, language and family relationships were lost too. Today, Native spirituality and traditions aren’t commonly believed in, and healthcare for a vast population of Canadians is suffering.

Problems from the past are still affecting Native people today: “Native people need to have basic needs met: adequate housing, nutritional food, health care, clean drinking water. Our elders are being ignored. There are still many of them who do not speak English and need interpreters. Elders are this generation’s key to our own traditions, but they cannot be heard.”4 Willier believes Native doctors should be able to work with non-Native doctors, but many don’t want anything to do with Native doctors.5 Interpreters who speak Cree will translate from patient to doctor in various hospitals, but if an issue involves a curse, for example, Western doctors don’t know how to treat a patient.

Willier, who lives in Sucker Creek, Alberta, treats individuals with heart problems, diabetes, ear problems, high blood pressure, cuts, toothaches, provides marriage and relationship consulting, and treats curses. For his medicine bundle, Willier picks herbs in Alberta, mostly in fall, and primarily relies on about 28 plants, plus another 33 on a more occasional basis.

In Part Two of the book, anthropologist David Young joins Willier for a 1,000 km trip to gather and photograph the herbs used in practice, and shares his diary. Their journey starts in Vancouver and then travels through to Sucker Creek Reserve in Alberta and the surrounding area.

Young notes takeaways from each stop on their journey. I particularly liked reading about a stop to visit Albert, an 87-year-old medicine man who owns an herb shack “where he has jars of labelled, dried herbs, as well as hanging from the ceiling. The shack is heated with a wood stove.”6 Here, a patient with walking problems is treated with herbs picked up in British Columbia.

Following part two is a list of each herb in Williers’ bundle, including Willier’s brief explanation, additional Cree information, properties, and folk uses. Sifting through this section I discovered that spruce cones, boiled with water and lard, becomes an ointment the Cree call pikim, which is used to draw infection from cysts or soothe skin rashes. Also, that dandelion leaf is one of our best organic sources of potassium, making the leaves one of the safest diuretics,7 and that red clover can be made into a tea for chest and lung problems, and also helps clear pimples8.

The herb applications given here are at a high-level — the specific combinations used for healing aren’t included so as to protect this knowledge from pharmaceutical companies who could use this information in non-ritual contexts.9 In this type of healing, all medicines must be administered in a proper ritual context where spiritual and psychological factors are encouraged to interact with medicinal ingredients.10

Photos of a few patients before and after treatment are shown, and results are visible.11 Young notes here that Native medicine should be judged on it’s own terms, not compared to Western scientific standards for measuring effectiveness. Including photos of patients in this manner was considered radical, he writes.

A Cree Healer and His Medicine Bundle: Revelations of Indigenous Wisdom, Healing Plants, Practices, and Stories concludes with a 24-page appendix of maps showing where Willier collects his herbs, so those in western Canada can find them and understand how they may be used. Regardless of whether or not a reader is inspired to forage for herbs, this book is a treasure for the information and history it shares about Native traditions, Canadian ecological issues, and health from a perspective that is rarely available.

Willier says, “Native medicine will survive, but it will have to creep through the cracks.”12 I hope more books with this important message make their way to bookshelves.