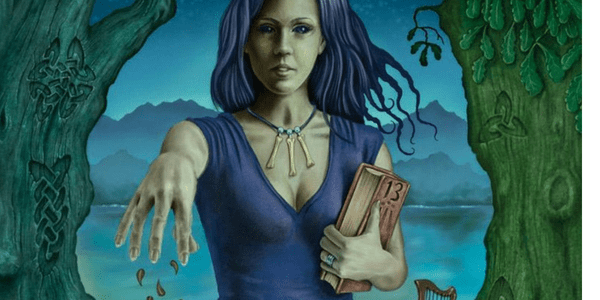 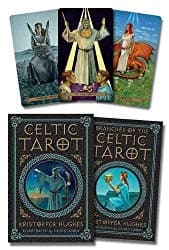 There are numerous versions of Celtic tarots out there, and it’s easy to understand why. The Celtic tradition has a rich folklore replete with heroic and mysterious characters, quests, and magick. Furthermore, Celtic spiritual traditions lend themselves to the spiritual and intuitive nature of the tarot. This is a unique Celtic Tarot created by Kristoffer Hughes and illustrated by Chris Down.

Kristoffer Hughes is chief of the Anglesey Druid Order, and a member of the Order of Bards. He is also a writer, teacher, and guest speaker at Pagan conferences and workshops throughout the UK. The artist, Chris Down, has been specializing in Celtic art for many years. His influences include all things mythic and ancient.

The deck is a traditional 78 card tarot deck divided into 22 major arcana and 56 minor arcana cards. The four suits are cauldrons, wands, shields, and swords. The cards are 7 x 11.7 cm which makes them very comfortable to shuffle, even if you have small hands. The deck is accompanied by a detailed, glossy, full-colour 336-page guidebook. Both cards and deck are in a sturdy presentation box.

The Celtic Tarot guidebook is no mere paper booklet like the ones often accompanying tarot decks. This is a stylish paperback book which is packed with information. The book opens with an introduction by Hughes, which tells the endearing story of how he came across his first tarot deck. Following the introduction, there are chapters on the art of divination, the history of the tarot, and the several chapters on Celtic tradition, and the role of the tree within that tradition. The book also includes sample spreads and detailed divinatory meanings for all cards.

The cards themselves are printed on quality stock with a matte finish. The back of each card is a coloured deep brown with a gold border and central diamond. The front of each one is beautifully detailed. For example, the Five of Wands depicts five young men dressed only in rust-coloured skirts. They each hold a mistletoe branch. Four of the men group together while one is on the outskirts.  He has a pentacle tattooed on his left shoulder. In the foreground is a small creature resembling a hedgehog. Before the divinatory meaning, the author asks some soul-searching questions. “Do you sometimes feel that regardless of how loudly you attempt to make yourself heard, everybody seems to ignore you? Surely your ideas and goals are just as valid as everybody else’s but why are they ignoring you?”1 The interpretation goes on to explain that this is a time to curb your frustration and find more creative ways to get your opinion across.

When it comes to reading the cards, Hughes offers a few sample spreads. At the beginning of the book, he explains a three-card personal reading, which can be used as a daily spread or to address a specific query. At the close of the book, three more spreads are offered: the traditional Celtic Cross Spread, a relationship spread and the Triskele spread. The latter is one that I have not come across before. Although it is a simple four-card spread, it provides insight into quick questions. Though the spread doesn’t offer an outcome, it can provide clarity to the question.

There are a number of things about this deck that make it unique. The most obvious is the guidebook. Not only does it offer a page and a half explanation and exploration of each card, but it also has a lot of other information, such as the history of the tarot, an introduction to divination and sample spreads. I particularly enjoyed the chapter called The Tree of Tradition, which discusses the purpose and meaning of the tree in Celtic tradition and how this relates to the tarot deck. The deck also has vibrant images that seem to come to life and play out a story as you read them.

While this is a beautiful deck, I would not recommend it to beginners. Although Hughes offers some instruction on how to read the cards at the beginning of the book, I think a novice would feel overwhelmed by the lack of general guidance. However, for someone who has a basic grounding in the tarot, and particularly those who love the Celtic tradition, I think this is one of the best Celtic Tarot decks available. I have enjoyed using it for Celtic Cross spreads and delving into Celtic folklore.