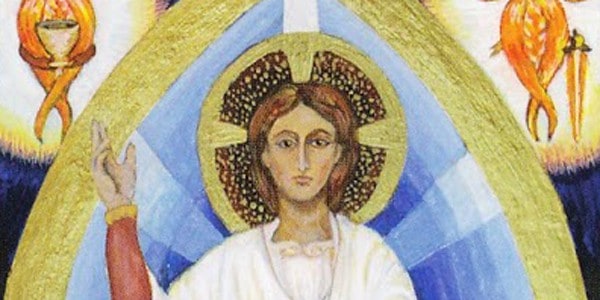 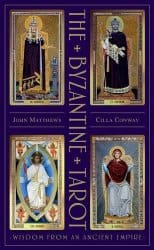 Upon opening The Byzantine Tarot,  I immediately recalled the Palo d’Oro I’d seen in Venice, Italy all those years ago. The 12th century CE altar piece glistened in the half-light, and the jewels, gold, and silver all shone through the plexi-glass. Like the Palo d’Oro — partially commissioned by the Doge of Venice, and partially taken as loot from the Sacking of Constantinople1 — The Byzantine Tarot is a composite of east and west, old and new styles, subtle meanings and bold icons. It echoes the artistic, cultural, and social aspects of the Byzantine Empire, spanning the 5th – 15th centuries CE and straddling two continents.

In its own mythology, the city of Byzantium, founded by Byzas — a descendant of Zeus — was foretold by the Sibyl of Delphi in 657 BCE.2 Along with its supernatural origins, its location — South of the Black Sea, North of the Mediterranean, Europe to the West and Asia to the East — serves as a trading point of ideas, traditions, and culture, whether mundane or occult. In both the artwork and the companion book to the deck, John Matthews and Cilla Conway provide the social history of the vast empire of Byzantium as it stretches across centuries and continents. Since this is the first Byzantine-inspired deck to be released, I am glad that this accuracy and care has gone into the project.

Conway’s art is striking, and while using familiar imagery, is reflective of of Byzantium’s institutions and hierarchies, in addition to colouration, style, and inspirations. The four suits are the Swords, Staffs, Cups, and Coins corresponding to four distinct aspects of Byzantine society: military power, court and peasant daily life, social and church life, and mercantile and trade power.  I love how these suits effortlessly match both traditional tarot meanings and the general culture and society of Byzantium. Knights, Countesses, Counts, and Pages round out each suit, reflecting the pure might of the Emperor, with no other kings in the realm. Also, many of the court cards depict historical persons — one of the most exciting aspects of the deck for me!

There are also other divergences from a standard tarot deck. The possibility of exchange seems evident in the High Priestess, renamed Sophia — Holy Wisdom, the same name as Constantinople’s seat of religious power, Church of Holy Wisdom, Hagia Sophia. Both the tarot deck and the city circle around Sophia as inspiration.  The historian Procopius wrote of the Great Dome of the Hagia Sophia being “suspended by a golden chain from Heaven,”  since it sits above a ring of windows, bathing the shrine below with light from above. Gold and jewelled mosaics further illuminate from almost every surface.3 Conway’s Sophia is angelic with mosaic wings behind her and a halo. She is clad in Byzantine clothing with open arms and sits on a throne. Byzantines would have recognized her as the protector of the city of Constantinople and the seat of knowledge. Sophia also embodies Gnostic spirituality, reminiscent of the High Priestess clutching a scroll, and straddling both pillars, above and below.

The intention of the deck seems to be to illuminate from within, and the Byzantine Tarot uses icons, colours, and architecture as opportunities to invoke this light. While pondering the cards on my bed one evening, with low candle light, the cards seemed to flicker like the golden and jewelled mosaics the cards are based on. Conway herself admits that a few cards “painted themselves,” much like the Byzantine icons were said to be made by “acheiropoieta” or not made by hand, but through divine forces. The concept of the Holy Image played a central role in the Byzantine empire. Using a tarot with a Byzantine style adds this power to the images we are familiar with. The fierce love the Byzantines had for their icons is well documented. Iconoclasts destroyed images, believing them to be unholy until Empress Irene assisted in restoring the right to use sacred images.4 Conway uses many well-known pieces of Byzantine art as inspiration throughout the deck, and The Tower and Judgement cards both take their inspiration from such holy icons. It follows suit that the imagery in this deck would have a deep power.

Another well-matched change is the Fool, now the Holy Fool, paying homage to the wandering ascetics outside Constantinople. My favourite card of the deck is the Charioteer, formerly the Chariot, depicting the historical person Porphyrius, one of the most successful chariot racers in Byzantine history. Born in Libya, he lived in the late 5th century CE, and the hippodrome, the arena in which he raced and won, hosted seven statues in his honour.  The deep purples and yellows of the card recall the golden mosaics and the porphyria stone used throughout many arts in the Empire. Unlike many chariot cards, Porphyrius holds the reigns of his horses, one white, one black.  This change reflects success due to mastery and skill, not just will: a subtle and important change. The Death card is also unique, depicting a laid out corpse with a small soul fleeting into the lap of a serene and crone-like, black robed death. There is a line of ancestors behind her, awaiting the soul of the recently deceased. I can only describe this image as sweet, and unlike any other death card I’ve seen. It speaks to the surrender we undergo in death and transitional times, while invoking a quiet end to a difficult struggle.

Christian imagery features prominently in this deck as should be no surprise. The Eastern Orthodox Church played a most important role in the daily lives of most Byzantines, rich and poor. Religious institutions wielded power, alongside the Emperor who ruled supreme over both religious and secular matters in the Empire. The Kosmos, or the World card is reminiscent of the un-bearded Christ found throughout many Byzantine depictions. The Star also shows the Star of Bethlehem, which features in Constantinople’s own history as well. Matthew and Conway also include some of the less savoury aspects of Byzantine culture. Slavery, the subjugation of women, and classism all featured heavily in the Byzantine world, and as the cultural and philosophical inheritors of Rome, it should be no surprise. Cards like the Five of Swords and the Five and Six of Cups expose some of the harder truths of the Empire, and our own human struggles of oppression and prejudice.

Reading with this deck took some getting used to, not because the imagery was so different, but rather because the imagery works subtly and uses the visual language of Byzantium. Matthews’ descriptions help to coax the subtleties out from the centuries. I was surprised to find the reversed readings of the cards were more prevalent than in any deck I’ve used. Out of the five readings I’ve tried with the deck so far, none had a majority of upright cards. One reading was all reversed cards. In my readings with other decks, I rarely draw reversed cards with distinct meanings. When looking back on my notes from using this deck, I see that the reversed indications provide more nuance than other decks tend to. Perhaps this is some inherent quality of the cards being Byzantine; winding complexities, whether artistic or social, are a commonplace Byzantium motif lasting well into the modern era.

I enjoyed the suggested layouts for readings, specifically the Hippodrome spread. Any question with a goal or plan in mind will have some great insight using it.  The Holy Fool spread is a good choice for murky situations.  I plan on trying the Seven Pillars of Wisdom, using all of the Major Arcana, and the Byzantium spread which mimics the map of Byzantium itself, for my birthday since I like to do complex readings for myself on that day.

Anyone with an appreciation for art history will also appreciate this deck, and experienced tarot readers will find Conway’s depictions easy to understand. The Byzantine Tarot is also an excellent choice for anyone who works with magick from Late Antiquity or the Middle Ages. This deck captures the wonder that Byzantium held for many and the mysticism associated with the iconography of the Empire.

Like the Holy icons and elaborate churches, The Byzantine Tarot will illuminate divine inspirations. Looking back on it, I feel as though this deck may in fact come from Byzantium itself, having traversed the centuries to manifest in our hands.