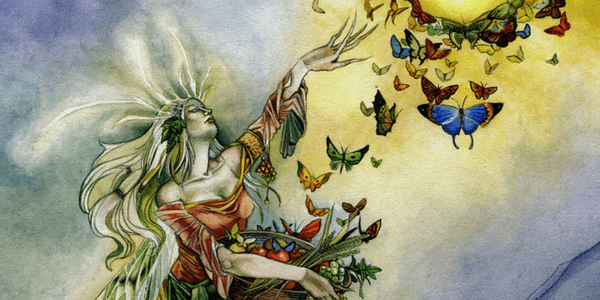 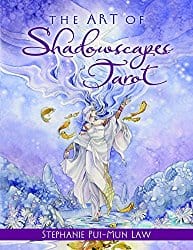 Stephanie Pui-Mun Law’s Shadowscapes art has enchanted tarot readers for over seven years, and the newest expansion of her realm allows readers to see the process behind the art. The Art of Shadowscapes Tarot gives a glimpse into the development of central archetypes as well as many symbols that fill the major arcana.

All of the 22 major arcana cards are reproduced in full colour, covering a full page (about 8 x 11 inches). This larger size allows the reader to see Pui-Mun Law’s intricate details. I bought a digital version of the Shadowscapes Tarot years ago so I could zoom in on these details.

On the pages opposite of the finished card images, there are descriptions and meanings of the cards, which are the same as (or similar to) the text that accompanies my digital deck. This “little white book” language is often quite beautiful. For instance, she writes of the Empress, “wandering souls… paint synchronized kaleidoscope choreographies for her pleasure.”1

Also opposite the coloured majors (surrounding the descriptions and meanings), are black and white pieces which resemble the work in Pui-Mun Law’s Shadowscapes Coloring Book. The heading text is purple throughout, which corresponds with the purple of the covers, and the image on the card skins.

Readers familiar with Pui-Mun Law’s colouring book will especially enjoy the sections called “From the Sketchbook” — two pages which follow each major with drawings and notes. Notes range from quotes by W.B. Yeats on roses and lilies for the Magician, to her tree inspiration from Yggdrasil and the Elder Oak of Sherwood Forest for the Hanged Man. Some notes are even images of Pui-Mun Law’s handwriting — which I love!

In the sketchbook section that follows Judgement, she discusses her use of poppies. They are symbols of sleep and oblivion, and are the colour of California poppies,2 which makes them part of her “personal mythology”3 as an Oakland-based artist. This appeals to me as someone who has lived in Oakland for more than eight years, and as someone who has read about the historical casket imagery of Judgement and was curious about her botanical replacement.

The progression of her art is fascinating. For example, Pui-Mun Law includes drawings and text which illustrate how her Wheel of Fortune card evolved from Lady Luck to the Fates, to focusing on the Wheel itself. Then she explains how she designed the Wheel’s repeated knot-work on a computer.4 In some cases, like the Devil, I even preferred one of her preliminary sketches.

On the mostly black and white sketchbook pages, there are touches of watercolour which emphasize the in-progress feeling. I’ve been following Pui-Mun Law on Twitter for a few years because she frequently posts pictures of stunning in-progress art. (I can’t wait for her Dream Dance Oracle to be completed!)

Shadowscapes art is a controlled blend or amalgamation, like much fantasy and occult art. She draws upon sculpture in the Musée Rodin in Paris, which is similar to how Italian Renaissance tarot artist, Bonifacio Bembo, drew upon older sources such as Hercules and the Nemean lion in his Visconti-Sforza deck. Pui-Mun Law mingles “languages of symbolism,”5 such as the Victorian language of flowers, butterflies repeatedly representing the soul, and the Chinese dragon or phoenix as representations of male and female principles.

Overall, The Art of Shadowscapes Tarot is a fun coffee-table book, and makes a great addition to the libraries of tarot readers and artists, who want to know more about the process of creating a deck.