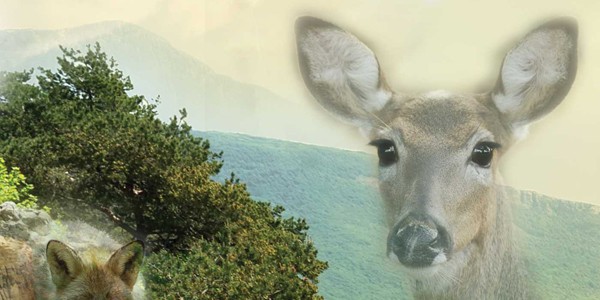 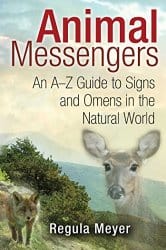 Who knew a chicken could guide the psyche to appreciate new beginnings? Worth having for its extensive information, quality writing, and depth of insight into human nature, Animal Messengers: An A-Z Guide to Signs and Omens in the Natural World is no quick and flimsy resource. Without droning on or confusing, it has enough fact and an unexpected level of psychology to satisfy any curious reader. It delighted my inner child, and my inner zoologist.

The squirrel, according to author Regula Meyer, reminds the reader to “be spontaneous, avoid entrenches patterns, and open yourself to all possibilities for enrichment that the river of life offers you. The flow of life leads us through highs and lows.”1 Now each time a squirrel crosses my path, I can take that common moment and reflect on how rich my life already is, and take faith in the unpredictable nature of abundance.

There are multiple entries for each of the sections, including mammals; birds; reptiles, fish, and amphibians; and insects and invertebrates. In the introduction on how to use the book, Meyer readily states that the text is not complete. She encourages readers to contact her to supplement the text: “I will gladly accept reports of experiences and suggestions for the animals’ messages”2 as well as provide new animals for interpretation.

The author asks readers to imagine that they are the center of the universe. “Everything that surrounds you is a reflection of your inner reality… What moves and touches you internally also shows itself on the outside.”3 This concept of self-as-universe is not new to those who meditate or work on vision manifestation. By placing yourself at this high level of significance, you can find yourself far more receptive to your own possibilities. Imagining yourself as the centre of the universe may seem selfish, but your compassion for others and general patience inevitably follows, especially as you take notice of the animals in your life.

Animal Messengers is infused with respect for omens. It is a useful resource for anyone interested in wildlife and symbols and synchronicity: its entries could apply to dream interpretation and tea leaf reading.

This book is intended to be used in response to interactions with animals, but animals are such universal symbols that it is easy to apply the guidebook to encounters with toy animals, logos, and images spotted online, etc. Often people have an affinity for an animal and wear a totem that reminds them of that animal. A woman I have known since this summer collects squirrel items and wears an acorn around her neck. She is an administrator who helps book readings for psychics. She feeds her inner squirrel to consistently pursue enrichment in her life and those she assists.

Through various animals, Animal Messengers depicts an array of psychological advice. Meyer advises considering one’s will in relation to their motivation if they encounter a donkey.4 The rat is a reminder that “it is very important to deal consciously with our daily feelings. Everything that angers us or makes us sick has its origin somewhere in our own behavior.”5 If you are an animal lover who craves advice to prompt personal inquiry and self-realization, this is a perfect book for you.

Meyer doesn’t disappoint, with details about animal origins and, where applicable, the North American influences on animal populations. The book is Euro-centric, however, falling short on what many may consider a number of worthy animal entries. The Switzerland-based author worked with the animals she encountered in real life. My preference, whimsical though it may be, is to also read about octopus, cardinals, coyotes, rhinos, alligators, giraffes, or whales. They were some of my first thoughts in the first couple of days experiencing her book, as many have long been loved by family or appeared in meditation or shamanic work. While working with such animals, it would be of benefit to study and honor them with some of the wisdom shared in this book. An entry on the sperm whale, which I have a stirring memory of seeing a full-sized replica of at a young age, could help me contemplate how that interaction shaped my early life.

Divinatory tools, like Ted Andrews’ Animal-Speak Runes work well with the guidebook. Part of me wishes the book recognized a broader spectrum of divination by including all the Chinese horoscope animals. While the book’s goal is not to associate animals with Western or Chinese astrology, many of the Chinese horoscope animals are represented. The entry on the salamander features a beautiful passage about dragons, too.

The salamander entry is one that brings particular depth to the introduction’s instructions involving the directions and animals as omens. Each direction has a designated tendency, such as the east (new beginning), the north (clarity), the south (feelings and consciousness), and the west (the real physical world of people).6 These associated meanings have their roots in Pagan traditions, and relate to spellwork and other rituals. The sun rises in the east, making it a natural fit with new beginnings, and the south is often associated with fire and passion.

Mystic and spiritual insights are given with regard to the resilience, adaptability, and particular skills of individual animals. The eel lifespan links us to “our obligation to the world”7 and “the time before and after life.”8 The message of the eel is “Legacy for the world”9 in part because of the four stages of its life. Meyer argues that humans also experience four life stages: the time before and after life, childhood, adulthood, and dying.10 “What you have left behind will contain true results for the great whole.”11

Meyer makes it clear that she believes in ownership of one’s thoughts, actions, needs, and so on, from when she states that animal encounters are “never about another person’s concerns”12 to messages such as those from the robin. “Clearly state what you feel and think. Sometimes it is hard to know the motivation of the pure heart if its feelings have been too long suppressed and filtered through the head”.13

One of the greatest rewards of this guidebook is pouring through the facts about the animals. It’s a field study in words reminiscent of the Discovery channel or basic wildlife study: roost, aerial, and pinniped, among them. The same may appeal to the geek, trivia fan, or wordsmith in yourself.

As I read, I frequently reacted with gasps of wonder, discovering or re-discovering the traits of certain creatures and the messages they inspire. Readers can marvel over details such as why turtles have that signature shell pattern, how aphids are milked by ants, and the life cycle of salmon, which takes them from fresh water to salt water and back. Another nice addition is the mythological story behind the woodpecker. It is claimed that the first woodpecker was Picus, a deity who refused to marry Circe. He didn’t want Apollo for a father-in-law. Known for turning men into animals in Homer’s epic poem, “The Odyssey,” Circe turned Picus into a woodpecker for revenge.

This book is a blast to binge read, or simply pick up for a quick look at one entry at a time. It arguably deserves the patience to memorize the 146 animals and their associations — but that would require months of study. If you are sensitive to reading about insects and invertebrates and don’t enjoy seeing photographs of them, only a small number (ant, bee, butterfly, dragonfly, spider) of the 36 entries in that section might be completely tolerable at first. With all the information in this book, some parts might be best in small doses. Thankfully, the guide contains one index of animals and their messages as well as one outlining the messages associated with the animals.

Colourful interpretations carry a variety of applications for mammals from cats to dogs to pigs, and are especially interesting for the horse (who represents life force). The horse provides a specific moment when a tarot reader can make use of this guidebook. Death, The Sun, each of the four knights, and the Six of Wands all have horses on them in the Rider-Waite-Smith tarot deck.

The white horse, which is seen on almost all of these cards, represents the power of wisdom: “the power of wisdom is only truthful when the intent is pure and the humbleness genuine.”14 A black horse, like that shown with the Knight of Pentacles, indicates “that you should sink into your inner emptiness and listen for the answer.”15 The red horse, on the Six of Wands and with the Knight of Wands, “advises you to give in to the playfulness, the wildness, the liveliness in your emotions.”16

Meyer’s interpretations allow more vibrancy and self-reflection when using tarot, not only for the handful of cards depicting horses. Animals exist throughout tarot, in the four court cards in the wands suit (all have the salamander on them, and the Queen of Wands also has a lion and a black cat), The Moon, the Nine of Pentacles, and others. The message within the snail on the Nine of Pentacles, in part, is “build upon the success of experiences” and the falcon seen sitting on the hand of the figure on this card conveys communication and is a “messenger of fate”17. The falcon “shows us how it can deal loosely, easily, and playfully with the energies in its living space without ever losing its dignity.”18

Regula Meyer’s writing comes from a place of soul, and a concern for wildlife. Neither her spiritual or ecological interests feel overbearing: anyone inclined to read this book is likely to share the author’s world view.

Meyer — and her animals — want you to evolve and be self-fulfilled: “The buzzard, with its yearning reputation, often wants to conjure you up to its high altitude to remind you that the fulfillment of your longing resides in your own heights. And only those whose circles fit with your own belong as a part of your evolutionary plan.”19 Another friend recently told me a story of how she encountered a buzzard, and as a tea leaf reader, I also see them in tea patterns on occasion. As with all of Meyer’s interpretations, the buzzard holds promise for those who find it in their lives.

Each entry in Animal Messengers: An A-Z Guide to Signs and Omens in the Natural World encourages reflection and connects each animal (and also the person experiencing it) to its highest potential.