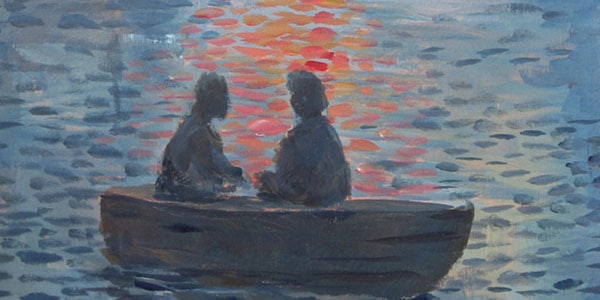 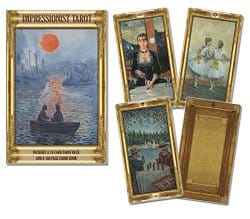 The Impressionist Tarot is inspired by the famous 19th century French art movement, rendering and recasting Rider-Waite-Smith imagery in the style of Monet, Manet, Renoir, Degas, van Gogh, and Gauguin.

I find this intersection of the arcana and Impressionism natural and nostalgic. Some of my early tarot studies were done in a café called Starry Night, where a large painting based on Vincent van Gogh’s work — with Fort Collins as the town beneath the sky — was prominently displayed. After these café visits, the first cheap art print I purchased to decorate my teenage bedroom in Colorado was van Gogh’s Starry Night.

Recently, I used this painting when teaching about ekphrasis. Ekphrasis is creative writing about visual art; one famous example is “Ode on a Grecian Urn,” by John Keats. I’ve spent a number of years using and studying this technique in crafting tarot poems and editing Arcana: the Tarot Poetry Anthology.1 My use of both van Gogh’s art and tarot art as muses for creative writing made me susceptible to the Impressionist Tarot’s charms.

Arturo Picca, under the direction of Corinne Kenner, recreates Starry Night in Trump XVII. The woman from the Rider-Waite-Smith Star card seems to have taken a seat next to her two jugs under van Gogh’s sky (similar to the substitution of Fort Collins in the café painting). Picca’s loose brushstrokes emulate the choppy, unfinished style that many of the Impressionists used in their rejection of more realistic predecessors. I had attempted to mimic van Gogh’s sky when colouring The Star in my BOTA Tarot (an uncoloured tarot that encourages readers to connect with their deck by filling in the black and white outlines), and Picca’s mimicry far surpasses mine. He creates a child rather than a clone.

In other words, Picca’s artwork blends recognizable paintings with familiar tarot imagery. Trump XII places an inverted (hanged man) shadow in Monet’s water lilies and Trump XIV moves the hands of the woman tending Manet’s Bar at the Folies-Bergère so she is in the process of mixing (tempering) a drink. Trumps I and II stand out as rendered in Gauguin’s “savage” style. The majors only include Roman numerals; there are no words on the cards.

My review copy did not include the companion book, which tested my art history knowledge. I convinced some friends to play a game where we tried to identify all the artists and paintings used in the major arcana. With the companion book, this deck could be an accessible introduction to learning about Impressionism. I may never be able to afford a trip to the Louvre, but I can set up my own miniature gallery with the tarot.

The little white book that came with my Impressionist deck does explain how each suit of the minor arcana is done in the style of a particular artist. Kenner identifies Édouard Manet’s “Spark of Genius” and his focus on “ordinary working people” (painting bartenders and sailors rather than royalty) as the reason she and Picca model the wands after his work.  ((p. 10)) Claude Monet’s fascination with “the color of light” and painting “what he felt” make him a good match for the cups.  ((p. 12)) The swords are inspired by the “Cutting Edge of Vincent van Gogh,”  ((p. 15)) and the pentacles embody the “Primal Physicality of Edgar Degas.”  ((p. 17))

There are some beautiful and enchanting minor arcana illustrations, such as the sunflower that replaces the heart in the Three of Swords. This switch made me consider how the sunflower is at the heart of many of van Gogh’s works as well as how it is harvested (with sword-like implements) and given as a token of love, especially in apology for wounding a partner’s heart.

Degas’ ballerinas dancing in and out of the pentacles emphasized how the body is like the five-pointed star and often made the suit more sensual than monetary. I especially enjoyed writing ekphrasic poetry about the Seven of Pentacles, a version of Degas’ Woman Combing her Hair with sunflowers taking the place of the Rider-Waite-Smith pentacle “flowers.” Picca’s art inspired sensory descriptions of untangling long hair, connecting how the sun kisses locks and flowers, and exploring the metaphors these images contain.2

However, in spreads it is difficult to quickly recognize patterns — to see if there is an abundance or lack of a particular suit — because the suit symbols in the illustrations shift. For instance, the aforementioned Seven of Pentacles uses seven sunflowers while the Two of Pentacles uses two ballerinas (with two yellow ribbons), and the One of Wands uses a cane while the Two of Wands uses umbrellas. Each card does have a tiny suit symbol (pentacle, branch, sword, or cup) in the top border and a number in the bottom border that clarify the card’s position upon closer inspection.

Also, a few of the minor arcana alterations initially felt off until I used them in a conversational reading for a friend. I mentioned that my favourite Rider-Waite-Smith image is probably the blindfolded woman holding crossed swords in the Two of Swords, so I didn’t immediately connect with the pool table (from van Gogh’s Night Café) holding uncrossed swords in the Impressionist Tarot. However, the pool table turned out to be a potent symbol for my querent and important in the context of her question.

A notable change introduced to the Impressionist paintings is their reframing. The vertical shape of tarot cards takes a slice out of more horizontal canvasses. For example, the large, symbolic cypress tree in the left foreground of Starry Night is cut out of Trump XVII, and Trump XIX only captures the middle section of Monet’s Impression, Sunrise. It’s as if two or three versions of each card would have to be created and combined in a diptych or triptych to see the whole scene in these famous paintings.

The backs of the cards make this reframing explicit: they look like frames, including an illustration of a hook for hanging at the top of each. This hook makes it so one can tell when facedown cards are reversed. The exhibition-ready “frames” and the little white book’s lack of reversed meanings try to persuade the reader to not use reversals.

I highly recommend The Impressionist Tarot as a muse for creative writing and for any majors-only spreads. Because the minors do not always follow the playing card tradition of having clear, consistent symbols in the illustrations, and it can be difficult to discern patterns in large spreads. However, I did find some illumination in a horoscope spread for myself, and the cards sparked insightful dialogue in readings. Overall, this deck emphasizes the ekphrastic quality of tarot reading.