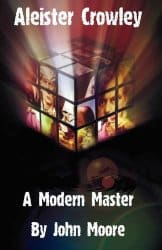 Aleister Crowley: A Modern Master aims to present itself as a cultural examination of Crowley, yet Moore does not seem quite up to the task.

Moore writes that one of his goals in writing this book was “to make excuses for him, defending what has been criticized as a more contemptible side of his character”.1 This is severely misguided. Crowley was who he was, excuses are rather moot at this point. (Do we excuse Baudelaire? Rimbaud? Berber?) Rather than attempt to sweeten the unsavoury bits Moore would have done better to explore them in context and describe how they influenced his work.

While my main target audience is people [sic] who already know about Crowley and are intrigued enough to want to explore the context of his ideas, I am also writing for anyone interested in modern thought who is curious to discover if a case really can be made for his importance.2

I find this surprising. Does a case really need to be made? Important historical figures3 are not in need of excuses to demonstrate their greatness; they need their context explained, and the repercussions of their actions and influence explored. With Crowley, this is especially true in relation to his profound relevance to today’s occulture. Unfortunately, that’s not the direction Moore takes.

I was disappointed that the brief biographical sketch remained rather superficial, skipping over several significant details. For instance, Moore asserts that Raoul Loveday “tragically died by drinking infected water, against Crowley’s explicit warning,”4 ignoring other possibilities, such as the cat’s blood, or sharing infected needles. Many other salacious or otherwise morally ambiguous details are left out of Moore’s account of the Abbey, despite their continuing influence.

Moore writes that “the whole Golden Dawn system is a poetic fiction,”5 which is not untrue, but he then goes on to dismiss it as an influence on Crowley’s life and work which seems rather absurd. While Crowley was familiar with much of the system’s early content through his extensive reading and independent practice, its framework and lesson structure framed the basis of the order he later revised for his own purposes, the Ordo Templi Orientis. The Golden Dawn’s internal mythology and practices would continue to be influential throughout his life, often serving as a comparative tool for his preferred methods.

Further, Moore assumes a familiarity with subjects and people mentioned, with no attempt to define or clarify terms. It is assumed readers will be familiar with Florence Farr and William Budge without introduction, yet no “case” can be made without contextualizing their relevance for a reader unfamiliar with their history.6

“Excuses” for racism and sexism are not just in poor taste, they betray ignorance.

Crowley is these days sometimes denounced for racism and sexism, as if the mere expression of such tabooed sentiments, irrespective of the fact that he elsewhere expresses opposite ones, is something that must always be intolerable.7

Under what circumstances does Moore honestly think racism and sexism are tolerable? More to the point, why attempt to excuse Crowley for these sentiments?8 Why not accept him as a brilliant, but deeply flawed individual? Perhaps “accept” isn’t quite the correct term; “acknowledge” might be better suited. Is it the moral complexity that seems disquieting?

Odd typographical errors make the book difficult to follow at times. For example, the footnotes in chapter 3 do not seem to correspond to the notes at the end of the chapter as the numbers repeat part way through.

Aleister Crowley: A Modern Master is far from perfect, but it will certainly spark discussion, which is a start.