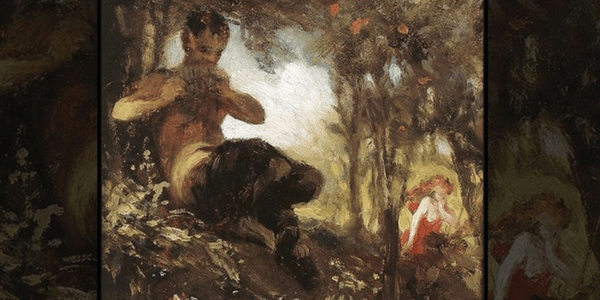 This is the second book issued by Bibliotheca Alexandrina in an attempt to promote the revival of traditional polytheistic religions through publication of a series of books dedicated to the ancient gods of Greece and Egypt (although the contents are not restricted to those two cultures). I reviewed the previous book Written in Wine earlier. Both of these books are primarily composed of poetry (Written in Wine has a few stories as well), although this book is primarily the work of a single author.

The title of this book refers to Pan, although numerous other deities make an appearance on these pages. Most of the poems are very short, but there are occasional longer works as well.

There are occasional dropped letters in some of the poems – at least I have to assume that the moderately frequent appearance of “the” where it seems “they” was meant is a case of a dropped letter and not intentional. I have to say, having said that, that this was a very enjoyable book of poetry.

I have read and reviewed Diotima’s previous offerings Refuge: Tales of Myth and Magick and And Banish with Laughter and was thrilled to see that she has authored another book. Her approach is one which renders poetry accessible and understandable to everyone. You won’t find yourself scratching your head trying to figure what she means.

One can never know what inspiration led to each poem, nor what depths have been stirred up to what extent, but that doesn’t limit one’s ability to appreciate the feeling that was gone into them. One may make assumptions about the poems in the section title “Love,” but the poet warns the reader not do to so, for “…you will almost certainly be wrong.”

The sections of this book are, in many ways, a map of life – “Gods, Myths and Sagas” followed by “Love” followed by “Life” and ending with “Death.” They move us from the most abstract of ideals to the most concrete “reality” we have to deal with in each life. The overall tone of this work is introspective, but there are undertones – some subtle and some not-so-subtle – to be experienced and to add seasoning to your reading

I heartily recommend this book for a variety of reasons, the most important being that it is good poetry. Almost as important, in my opinion, is that the purchase of this book will both ensure and hasten the publication of the next book by this organization, whose aims I fully support.

Bibliotheca Alexandrina is not going to give us more “101” books. It is going to give us inspiration and encouragement to bring our thought and beliefs to a wider audience. It will encourage us to examine, personally, why we believe and what we believe. I doubt that they will every become a “major” publisher, a but a few quality books a year from a company that cares are worth far more than flood of mediocrity from a company that cares only about profits.

Now is the time for us to return the encouragement. Buy this book for your own enjoyment. Then buy a copy for someone you care for. This will be a gift they will remember, as it continues to give pleasure long after the first reading.