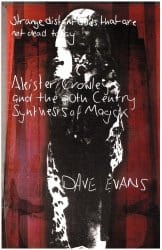 Aleister Crowley and the 20th Century Synthesis of Magick is based on Dave Evans’ master’s thesis from Exeter University and represents the second, revised edition (the first being an e-book published in 2001).

Evans writes that “Crowley is a particularly attractive person to study, as, apart from the Elizabethan magician John Dee, no leading occultist has left such comprehensive personal diaries and writings. It is this intimate and minutely detailed material that facilitates deep engagement with the subject.” This certainly seems to be the case.

With the glut of material related to Aleister Crowley available, that he continues to be read and studied more than sixty years after his death is a testament to his continuing influence on contemporary occultism. “Crowley’s appeal continues because study of him is an eclectic and unfinished process, and practice of his techniques appears to confer psychological and/or spiritual benefits. In some way, even if it is purely “psychological” magick works to effect a change in the individual’s consciousness.”

In the present book Evans explores Crowley’s connections with British intelligence, and the “closet occultism” of occult fiction author Dennis Wheatley and spy Maxwell Knight are touched on as well.

More uniquely, the originality of Crowley’s Liber AL vel Legis is called into question as Evans considers earlier sources for the philosophy and inspiration for the text, with detailed comparisons to Golden Dawn initiate Florence Farr’s written work. This is certain to raise hackles, especially as the presentation seems a little unfair. Evans questions Crowley’s use of familiar phrases and terms as “plagiarism,” but considers the similarity between artist and occultist Austin Osman Spare’s work and Crowley’s to be more likely the result of “solid concordances on magical truths than plagiarism,” despite allowing that some similarity “might be expected from an erstwhile pupil and teacher.”

Aleister Crowley and the 20th Century Synthesis of Magick is a slim book, but it raises intriguing questions about Crowley and forces us to reconsider what we think we know as gleaned from earlier sources.