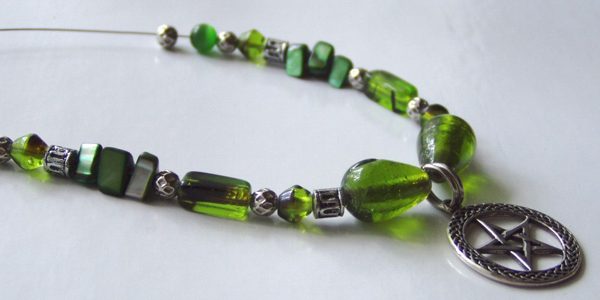 Jewellery has always fascinated me, everything about it: the process of its creation, the many disparate materials used, the way it interacts with the body, and the subtle messages it conveys. It seems to me like a place of infinite creative possibilities. However, much of my jewellery experience has been in the context of the fine art world (I am a metalsmith by trade), where decorative elements and overtly spiritual themes (funnily enough, two things that really interest me!) are often frowned on. Looking back, I don’t think I’ve gone a single day without seeing someone wearing spiritual jewellery, whether it’s a cross, a pentagram, a set of prayer beads, or any other number of symbols. Not all jewellery is spiritual, certainly, but I think that understanding that spiritual context is crucial for understanding how people see and interact with it.

Defining jewellery in the first place is tricky. Jewellery and other forms of ornamentation aren’t always distinct, and neither is how it interacts with the wearer’s body.  Some jewellery conforms to the shape of the body (necklaces, bracelets, rings), some attaches to clothes (brooches, clasps, buttons), and some requires the body be modified for it to be worn (body piercings, neck rings). When most people imagine jewellery, they think of something made of precious metals and, well, jewels, but it can be made of virtually any material.

The earliest discovered jewellery is some 90,000 years old, and was made mainly of bones, shells, teeth, claws, and various plant materials. You could argue that this jewellery was sacred in nature — it was used as a sympathetic link to the animal or plant it was sourced from, either to protect the wearer against that thing or to allow the wearer to take on its positive qualities.1 Jewellery’s cultural uses are many and varied, communicating social status, wealth, marriage, authority, spirituality, and so on.

As worn, jewelry constitutes a complex statement of social fact and personal fantasy, which other people in the same culture recognize and interpret… [P]ersonal ornamentation exerts a subtle control of the coded message the wearer imparts. What public relations is to large corporations, clothing, makeup, and jewelry are to the individual. On the body, decoration has a subtext.2

In order to gain a better understanding of how artistic and spiritual practice interact with each other, and to show the unique creative process of making sacred jewellery, I spoke to three artists who specialize in this kind of work. 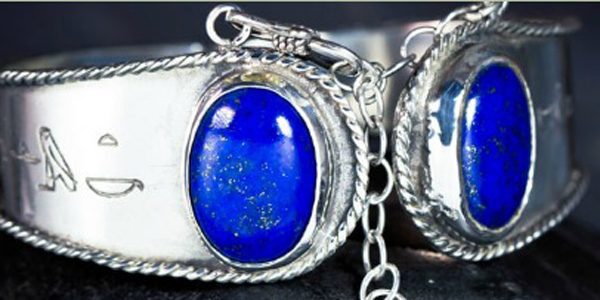 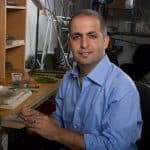 David Weitzman of Ka Gold Jewelry works in silver, gold, and stones, and his designs draw mainly from sacred geometry and various mythologies. His interest in the spiritual started in childhood. He was fascinated with animals and nature, and began noticing natural laws and patterns. He read many books about Greek, Egyptian, and Mayan mythology and culture and found many of these shapes and patterns repeated in all of them as well. This evolved into an interest in sacred geometry as an adult.

Each piece of jewellery he makes is meaningful, drawing on universal shapes and motifs, “using the knowledge and wisdom of the ancient cultures to show the mathematical laws and unity in all that exists in nature,” and is meant to communicate these ideas in a personal way that can transcend language barriers.

Though most of his work is spiritual, Weitzman doesn’t see any real difference in his artistic process between spiritual and secular work, as both require him to put his entire heart into it. He understands the universal power of shape and symbol, and seems to use it to great effect. Many people have contacted Weitzman saying his jewellery has changed their lives for the better, and he related this incredible story to me:

When I first started creating jewellery, I started with the model of the Merkaba and gave the pendants to friends and relatives. One of the people I gave it to was a very nice young man who used to come to my house a lot and was, sadly, a drug addict. One night I woke up and found him sleeping on our sofa, shaking, grinding his teeth, and sweating.

The next day I decided to give him the Merkaba pendant and explained to him about this shape and what it means. The change was amazing! Within a day he stopped smoking (even cigarettes); in two weeks he was wearing white and practicing meditation.

Previously it was practically impossible to interact with this person, who had been using very heavy drugs, and we really thought that he was lost. Within a few months he was completely clean of the drugs and was meditating for eight hours with a smile on his face and he is as lucid as can be. Today he has a cute child and he lives on an organic farm in the north of Israel. 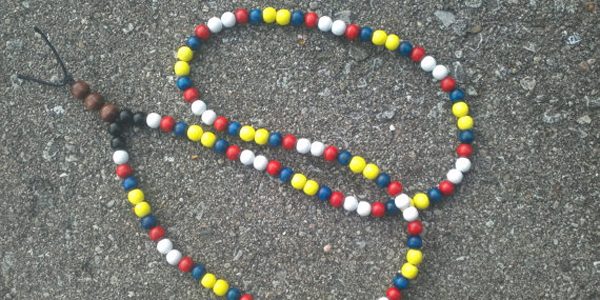 Kalagni makes prayer beads and pendants, mainly for Buddhist saint and deity figures. They began making jewellery for themselves out of necessity, being unable to find pieces relevant to their work, and later began selling work to fill this gap for others as well (which is a common theme for jewellers of all kinds). They made malas (beaded bracelets used for mantra recitation in Buddhism) for a time before then, after being inspired by planetary angels make coloured malas for each of the planets. Soon after, they began making them for Buddhist figures and other spirits as well.

Kalagni describes themselves as a Buddhist sorcerer. They are a Vajrayana (Tibetan) Buddhist and have been ordinated through the Gelug school. They use “sorcerer” to mean an undefined magical practitioner drawing on Solomonic magick, Thelema, chaos magick, and other practices. Kalagni says, “Buddhist describes how I understand the world, and sorcerer is how I act in it.”

Most of their work is spiritual or sacred; their rare secular work is almost always a commission. It’s simply a matter of putting colour and image together. But their spiritual work requires much more thought and planning, often timed with planetary correspondences or significant days. They generally make a new mala when they receive a new empowerment in Buddhism, and they are occasionally contacted by spirits requesting their own malas. They describe their process as such:

This process is a complicated back and forth, I have to figure out associated colours, or sometimes materials, then how to figure out the patterns.

For instance when making the White Mahakala Wealth Mala I decided on using mainly white beads, as that is his primary colour, accented with gold and silver plated beads, as those connect to wealth. Then to figure out the pattern I experimented with spacing the accent beads every 14 spaces, as White Mahakala’s mantra has fourteen syllables.

I found that if I started with an accent bead, and placed another every fourteen, then did the same starting from the other direction I ended up with a pattern of accent, four white beads, accent, eight white beads, repeat. This is perfect, it looks good, not too much silver and golden, and four and eight connect to Jupiter and Mercury, the two primary planets associated with wealth, a great match.

All of my malas get worked out in a similar way, when I think about the numbers, and colours involved, and then try to find a way to make it work together, and still look good, which can be difficult with certain colour combinations. 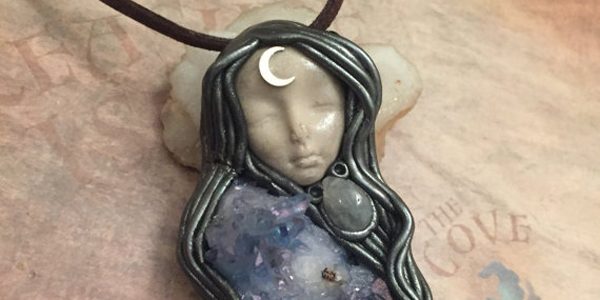 Isa Alexandria works with gemstones and polymer clay, often with a focus on nature and goddess imagery.

Her journey started when she was 31. Her life seemed to be as she wanted it — she had a nice corporate job in Toronto and a happy marriage — but it was empty and unsatisfying. She decided a change was necessary. She moved back to her native Ecuador and began working with sacred plants (including ayahuasca and San Pedro). She also adopted Pleiadian Lightwork around this time and credits this for much of her spiritual growth.

Around this time she began to discover her creativity and began making jewellery. She loves stones and collected them for many years, and after discovering polymer clay, she found it natural and intuitive to combine the two into jewellery. Her artistic practice and spirituality play off of each other quite a bit. Describing this, she said:

I’m often shown pieces, patterns, and themes in my inner journeys , either through meditations or sacred plants. For example, the many pieces I have created in honour of plant and animal spirits.

At the same time, the process of clay sculpting is deeply meditative and often leads me to connect with higher energies that influence the very piece I’m creating, it goes both ways!

You can find links to these artists’ other work, as well as their interviews in full, below. Thank you so much for reading