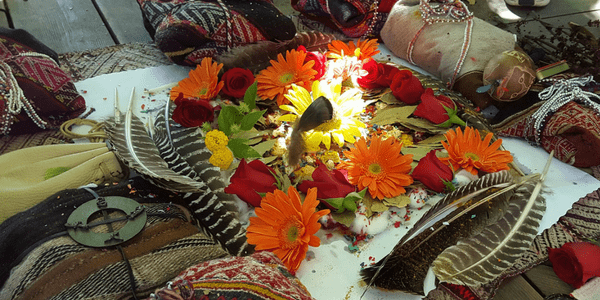 Beltane has always invoked images of earthiness for me — profusions of plants and flowers springing from fresh soil; bunnies and squirrels scampering over lawns, birds building nests in the trees; and humans gathering outside for spring planting and baseball playing on green and sometimes muddy diamonds. The witch in me envisions intertwined lovers laying on lush blankets of flowers and moss, joining together as the warm spring breeze blows around them, carrying their sounds over the earth and aiding in the fertilization of what lies within and below.

So, an altar built on the earth’s surface seems creatively perfect for this sabbat, using the earth’s own elements and offerings for its form and structure, to fertilize and enliven all manner of things for the coming season. Several cultures around the world have a traditional form of earth altar; in this article I’ll describe practices from my own spiritual education in Peruvian shamanism, and another perfected by artist and ceremonialist Day Schildkret he calls impermanent earth art. 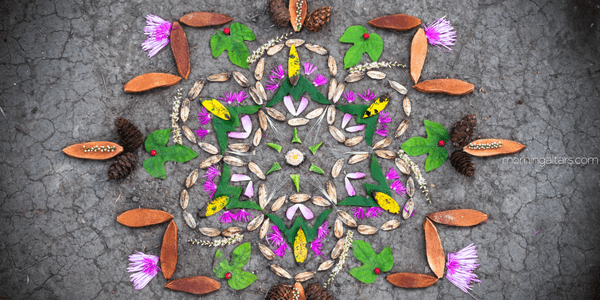 During my study of Peruvian shamanism, with shamans Ellyn Rosenthal (co-founder of Rising Fire Shamanic Healing Center in Portland, Oregon), and Doris Diamond, I learned how to construct an earth painting. Shamanism is an earth-honouring tradition concerned with healing and bringing balance into the natural world, and also among its those who live in it.

Earth painting is not an indigenous Peruvian practice, according to my teachers, but is derived from sandpainting, a healing tool used by the Native American cultures of the American Southwest. They taught it because it melded well with the use of the mesa, the ancient Peruvian personal medicine bundle containing rocks, crystals, and other objects called artes that are infused with power.

Earth paintings are constructed to gather information, to create balance, and to heal in whatever realm is necessary — spiritual, emotional, mental, or physical. You can also ask for blossoming to occur on those levels, perhaps the use most suited to Beltane. To form an earth painting, you first need to intuit the right location for it, using your intention as a guide.

Then, find a border of some type near the location; use whatever natural, relatively straight objects you can find on the ground, such as branches. The border can be any shape; just make sure all the sides are touching so the interior is completely closed in. You are not literally painting on the ground; rather, you are constructing a vignette with found objects.

You will need to collect some rocks at the location, or use rocks or crystals you have worked with before that you’ve brought with you, as well as anything else that calls to you. Whispering your intention into the objects, place them within the border, using your intuition as a guide to placement. As you do this, ask any spirits, guides, helpers, or god/desses for their attendance and aid. Give blessings and thanks, then leave the location. You will be leaving your objects there for several hours or overnight, so make sure you’re cool with the possibility they may not be there when you return (objects have disappeared from my earth paintings more than once).

When you return, at least some of the objects, and sometimes the border, will have moved. Look at the structure of the border, how the objects moved or if they disappeared, how they have been altered by wind or animals. What is there now that wasn’t there when you left? See how you feel standing outside the earth painting, and then, if it’s big enough, see how you feel standing inside (even if this is only on one foot). What intuitions are coming through? What do you see about your intention or situation that you hadn’t seen before? What do you know now about your blossoming?

When you are done with your work, dismantle the earth painting, thanking the earth, spirits, guides, helpers, or gods or goddesses that were with you, as well as the objects you worked with. Leave the area as you found it. See what happens over the coming weeks or months regarding your intention. 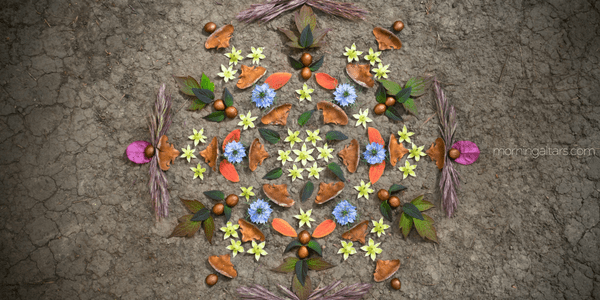 Day Schildkret has created his own earth altars since childhood. He has since formalized the steps into a practice he can teach to others around the world. They create their own MorningAltars, as he calls them, during his training sessions and ceremonies. MorningAltars are reminiscent of earth paintings, only much more elaborate.

In an interview, I discussed with Day the similarities between his work and another Peruvian shamanic practice, that of making despachos, ceremonial medicine bundles created by the shaman from local flowers, beans, seeds, and other natural elements, and from manmade artes such as crosses, letters of the alphabet, and coins.

A community sends its prayers to Spirit through burning or burying the despacho in the earth. No two are ever alike, since each has a different purpose and are made spontaneously by the shaman in the presence of the community, which adds its own prayers to the bundle. The spirits receive the smoke from the contents of the bundle and if they are satisfied, they grant the community’s wishes.

“Both of them [despachos and MorningAltars] are impermanent and in some ways are meant to feed, to be offerings,” Day said. “In relationship to my work, I often think I’m making a feast. It is so interwovenly connected to the place that I build it because it is made of the place. I leave it overnight and by the next morning sometimes it is quite literally feasted upon and eaten. So it’s a very interesting practice of what it means to feed the place that we live as opposed to being fed by it.” 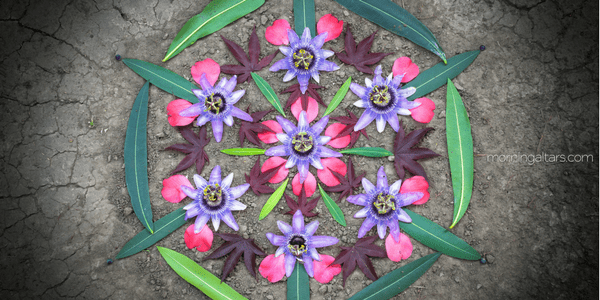 Creating your own MorningAltar for Beltane

Day shared with Spiral Nature his seven-step process for creating a MorningAltar.

Step 1: Get lost and forage. Day calls this “wandering and wondering.” Go out, wherever you are, and let the environment — the wind, the sounds of birds, water –be the guide. Whatever you find along the way becomes the ingredients for your altar. Day finds that altars around Beltane contain a very different spirit than other seasons: the fertility and pregnancy of the earth are inherent in them.

Step 2: Listen to where it is you are meant to build the altar. Sit down and be in the place; listen to the activities of the place.

Step 3: Clear and cleanse the space. Use a broom to sweep it, and put out intentions for whatever it is you want the altar to bless.

Step 4: Create the altar, laying out all the pieces from foraging. Start in the centre and ripple out, or start at the outside and move in. Day teaches that there are three pieces to this process: working with symmetry, consistency, and proximity. Then work with colour, making it pleasing to your artistic eye. “I face my doubts, fears, and inabilities, [while feeling] a deep sense of listening and persistence, and being devoted to the work” during this step, Day said.

Step 5: Bless the altar. Your altar is a feast offered to loved ones, your community, earth, ancestors, seasons, and so on, so instill deep blessings and invite in those you are offering it to, Day said.

Step 6: Walk away. This is often the hardest part, according to Day. “Your art changes; it’s feasted upon and destroyed. Precision and perfectionism is at its height when you’re about to walk away,” Day said. “There’s heartbreak in walking away from something you’ve made; the practice is practicing impermanence and not being attached, and letting things move as they want to.”

Step 7: Share your altar like a seed. Inspire other people to create beauty and scatter blessings, Day said. He photographs his altars and puts them onto his website, social media, and distributes them for articles such as this one. He lets other people have access to his work because it is not just for him. It is a practice of giving back, he said.

May these practices inspire you this Beltane to connect deeply with Mother Earth, to birth whatever it is that is deep within your soul, and to let it go with joy and in beauty.

Pictured here are some spring altars Day has constructed during past Beltanes. More photos can be seen on his website MorningAltars. You can connect with him on Twitter and Facebook.

Beltane blast: Rituals and activities for the first of May