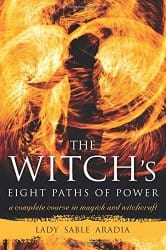 Lady Sable Aradia has been a practicing witch for a quarter of a century. Being a third degree initiate in the Star Sapphire and Pagans for Peace traditions, she has a depth of experience and knowledge of Wiccan practices that are of value for initiates and veterans alike. Her aim in this book is to explore the concept of the Eightfold Way. This term refers to a Wiccan practice that was introduced by Gerald Gardner in the 1960s. It involves eight steps on the path to developing magical abilities. Lady Sable Arcadia provides a compelling and contemporary view of this Wiccan tradition.

The Witch’s Eight Paths of Power is written in clear and concise language that is both informative while holding the readers’ attention. The book begins with an explanation of the very foundation of magick: intent. Aradia details the importance of forming an exact and precise intent in order for a practitioner to will it to happen. For beginners who are struggling with the concept or the practice, the chapter outlines several exercises that can help improve creative visualization, facilitate meditation, and raise conscious awareness. The next two paths deal with the trance — developing a state of consciousness in which to gain insight, heal, seek knowledge, and the Craft — the practice of ritual magick.

The practice of magick uses a language of symbolism and metaphor to circumvent that little voice in the back of our mind that tells us something will not work. It speaks to our subconscious in primal symbols which set forces in motion to bring about our True Will.1

The next two chapters deal with intoxicants and dance movements. Aradia handles the first of these paths with expertise and aplomb. She states clearly that not all practitioners need to make use of intoxicants and that those who wish to, should do so with appropriate care. She also explains in detail a range of herbs, natural hallucinogens and other substances, their effects and how they can be used in magical rituals. The path to dance and sacred movement is an enlightening chapter which fully encapsulates the mystical and ritualistic aspect of dance, from the Five Tibetan Rites to maypole dancing.

The final three paths cover the advanced practices of blood and breath control, scouring, and the Great Rite. Again, Aradia writes about each aspect of the Craft without skimping on detail or example. She discusses delicate issues such as scourging and sexual magick with the sensitivity and respect they require. To supplement the information and exercises throughout the book, she had added appendices covering correspondence tables such as colour and chakra correspondences, and a moon phase chart.

If you are drawn to the Wiccan way and you are considering practicing this tradition, then Lady Sable Aradia’s The Witch’s Eight Paths of Power will not only give you insight to the fundamentals of the Craft, it will also help you learn your way and to hone your magical skills. This is one of the best books out there for a novice witch who wants to learn more about the philosophy, practice and ethics of contemporary magick and witchcraft.