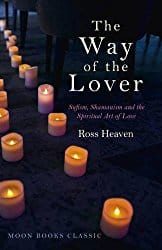 After reading a few books of Rumi’s poetry and developing my trance dance practice by exploring Sufi ecstatic dance techniques, I was intrigued by Ross Heaven’s use of the shamanistic medicine wheel as a way to understand Sufism. His blending of western and eastern spiritual practices is rather Jungian, and also prevalent in Joseph Campbell’s talks on the relationship between the Sufi and Arthurian religions of love.

Related: My review of Joseph Campbell’s Romance of the Grail

Moreover, the pedagogy of presenting the same information in a variety of ways is sound. In my grad school course on theories and strategies of teaching writing, one piece of advice was to be prepared to present the same lesson in six different ways. The medicine wheel — four cardinal directions and the centre — is probably familiar to many who follow western esoteric traditions. For instance, some witches call the four corners and the wheel of fortune is one of the most recognizable tarot cards (and literary concepts).

Heaven organizes most of The Way of the Lover around the directions of the wheel and their corresponding Sufi stations. The stations don’t map exactly onto the wheel; the fifth stage of the wheel — the centre — includes two Sufi stations, maqam-al-Qurb and maqam-al-Wisal. However, there are many interesting connections between the traditions, such as threshold places that Rumi writes about and the “betwixt and between” places that Celtic shamans discuss (frankly, the sky meeting the sea immediately caused me to sing How Far I’ll Go from Moana).3

In addition to the cyclical time of the medicine wheel, Heaven cites a number of respected psychologists and includes examples from his own practice. For example, in his discussion of compassion, he connects a passage from Rumi’s teaching stories from the Mathnawi with Gottman’s “Masters of relationships”4 — the latter of which I had previously encountered in therapy. As someone who has only been able to afford therapy sporadically, I find books like The Way of the Lover invaluable.

After alternating sections of didactic prose, offset verse by Rumi and others, and visual aids like tables and checklists, most chapters end with a series of exercises. These are generally meditative — gazing, visualizations, mantras, breathing, and so on — but some are a bit more physically active, such as a vision quest. Sufi trance dance, or hadra, is only briefly mentioned in an early discussion of zikr (“remembering the truth”)5, which is a shame because trance dance is an excellent alternative for those who favour movement over stillness.

Related: My review of Trance Dancing with the Jinn

Many of the lessons found in The Way of the Lover are familiar and useful. True love is defined as “spiritual work”6, a “means to growth”7, and “beauty in the moment”8 — explicitly connected with my homeboy Keats’ ideas about beauty and truth9 — as well as the process for (re)unification with the Beloved (God). I was especially moved by Rumi’s idea of “not-being”: envisioning the self as a place of possibility, rather than a fixed identity10, partially because it reminded me of China Mieville’s possibility sword in The Scar.

While I generally support the “anarchic” qualities of the Way of the Sufi and shaman11 — such as how “obedience to authority” is a “detriment to love”12 — I strongly disagree with Heaven’s final idea about “revolution”: to throw away or burn books, including his. Heaven and Rumi are not alone in this somewhat anti-intellectual stance; I’ve seen similar sentiments in the Tao Te Ching. Perhaps this reveals my strongest attachment — my bibliophilia. However, I would argue that the act of writing and the act of reading are indeed actions, and just as important as meditation and “going out into the world to experience” life13.

Overall, The Way of the Lover is a good introduction to Rumi and Sufism, as well as an interesting text for those who want to learn more about becoming an aashiq, or “arch-lover”14. It is especially illuminating for readers who are familiar with western spiritual practices (such as the medicine wheel), but also clearly explains some shamanistic techniques. I especially recommend Rumi and Heaven’s interpretation of his work for those who are struggling in darkness because unlike many positive thinking techniques, Rumi suggests, “the remedy for your wound is the wound itself.”15