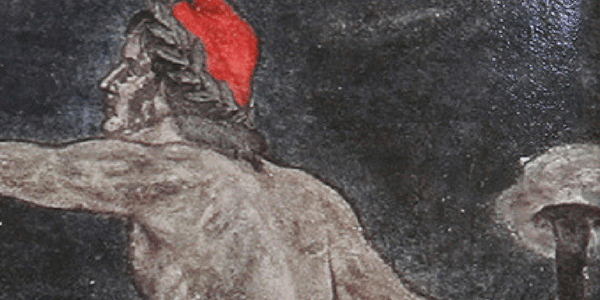 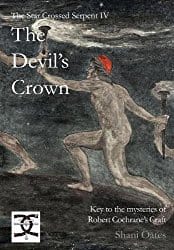 So, it begins with Cain.

Most of us are familiar with the Abrahamic tradition surrounding the first-born son of Adam and Eve. After his sacrifice was rejected by Jehovah, Cain killed his brother, Abel in a jealous rage. He was cursed, given a mark, exiled and left to wander the earth. In The Devil’s Crown: Key to the mysteries of Robert Cochrane’s Craft, Shani Oates delivers further insight into this figure from the northern parts of the world. Readers learn about the tradition based upon the beliefs of Robert Cochrane, an English occultist and the founder of The Clan of Tubal Cain.

Cochrane saw Cain as the benefactor of humanity who instilled people with the sense of self and by his mark, the ‘Children of Cain’ will know each other. He believed that a person’s faith could be measured by how much they participated in its disciplines. Commitment is extremely important, not only to the path but to family, the divine, and to oneself. He taught that the most profound of all truths was that: “All ritual is prayer.”1

Oates goes on to explain the structure of the Craft. That the efficacy of religion lies in the miraculous, the unforeseen, and the extraordinary. She explains the meaning of the Stang, the mask, the Wild Hunt, the Candlemas rite, and why divination and magick are important to the practitioner.

When explaining the aspects of a Clan, she quotes Cochrane when he says that people describe themselves by the local name of the Deity when forming a clan. For example, he called himself a child of Tubal Cain; the Hairy One. It was controlled by the tanistry system, was preserved by ancient precedents, and it was extremely important for the head of the Clan to pass down the virtues before he died. It was the belief that he carried within his body the totality of all the witches in his family for centuries. She then goes on to explain how a successor was chosen.

I appreciate Cochrane stating in his writings that if an occultist claims to have secrets, they are fake, and that wisdom is available to all who seek it. In an age where everything has a price and where many try to sell their wares to the eager seeker whether it is the truth or not, this must always be considered when trying to obtain knowledge. Oates goes on to clarify that while the truth is not secret, there are still mysteries. All practitioners of the occult know that these come with much devotion, practice, and communication with the divine.

Oates explains the importance of the hearth. The heart of a community with the hearth-stone binding the people to each other and strengthened by the essence of the divine. In a time where spirituality has been forgotten in the lives of a great portion of the world, the following statement is a good reminder to what is important:

Kneeling before the divine to surrender all that is human within the self, acknowledges the divine within oneself: this is to honour our existence within the All. Of the many who speak of the divine, too few of them uphold such humility that is equally a process of integrity. Honour and pride have been replaced by status and esteem.2

A manifestation of the mark is the act of devotion to the divine. Cochrane states that devotion requires proof and that it will manifest in different ways, the most common ones being poetic vision, the vision of memory, magical vision, religious vision, and mystical vision. He explains that faith doesn’t tolerate anything and that those coming to it must go with empty hands saying, “I know nothing, I seek everything.”3

In the chapter titled, “The Quick and the Dead,” the reader learns more about the triune deities of the Clan. They are Saturn who is the Old Horn King, Hekate who is Wisdom and Virtue, and Hermes, the Young Horn King. The importance of the Stang is shown, and that it can be symbolic of the Tree of Life, Death, Knowledge, and Wisdom but also a vehicle for the mind and spirit. Kharon, also known as the Ferryman, gives the spirit passage across the river but he also brings the spirit back to this world, so their soul can continue its journey. A person faces three choices while travelling the river, and the author explains in detail what this entails.

One of my favourite parts of the book is where Oates describes the transformation that happens when one starts to follow the path of the shaman-witch. She talks about the journey of the soul during trance working, how it reaches the Otherworld as it will in death. One of the purposes is to create the kind of afterlife one wants. What a concept!

There are a few appendixes with titles including a “Definition of Memory,” “The Law, Houzle,” and a prayer called “The Ash Tree.” The author also includes a glossary of very useful terms that will benefit the reader beginning on thi spath. For those who would like a greater understanding of the book, notes are included. She ends by giving a quote by Julian Assange. It is regarding truth and how to get it. They are powerfully chosen words and gives the perfect conclusion to the book.

If you want to know the truth, no one is going to tell you the truth. They are only going to tell you their version of it. So, if you want the truth, you have to seek it out for yourself. In fact, that is where the real power lies. In your willingness to look beyond, this story, any story. As long as you can keep searching, you are dangerous to them. That’s what they are afraid of.

It’s all about you. — Julian Assange

As Maid of the Clan of Tubal Cain, Shani Oates gives the reader a comprehensive look at her Craft. For those who would like to learn more about this tradition, I would highly recommend The Devil’s Crown: Key to the mysteries of Robert Cochrane’s Craft.