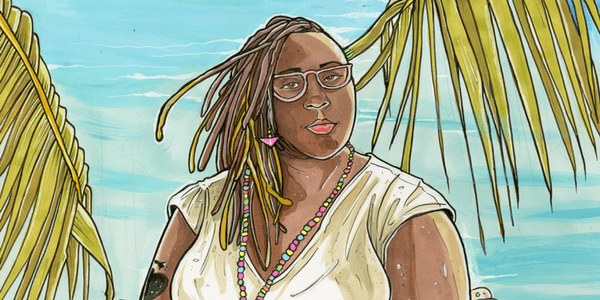 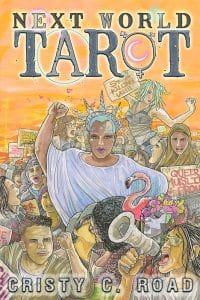 There are many tarot decks in the world, but representation and diversity are still a major issue in most mass market decks. Next World Tarot by Cristy C. Road takes this issue head on with a deck that is modern and full of symbolism that aligns with the times we live in.

This is an indie deck printed directly by the artist. The first thing that should be taken into account is that this is a very large deck. The 78 cards are 4×6 inches, and printed on photopaper. They are sturdy but they are also a bit slippery. This actually is very helpful, because it makes them a bit easier to shuffle. The back is not reversible, which indicates that the deck is meant to be read without reversals.

It comes in an attractive box featuring some of the art on all sides. The box is only large enough to hold the deck itself, the guidebook is outside of the box, and separate. This is not really a huge issue, but it does mean that people will need to be mindful of keeping the book and deck together, if they intend to do so. The large size also means that there’s no way to purchase readymade, generic tarot cases or bags.

Even though the size makes this deck a bit harder to handle and store, it’s worth it, as each card features detailed and beautiful artwork. The size of the cards makes the work that has been put into the cards really shine. Nothing  disappears into the background on these cards, you can clearly see the details that have been put into the artwork.

The cards are tied together, visually, by the setting. Aside from Road’s style being very distinct, the thing that creates unity in the deck is it’s dreamlike dystopian or post-apocalyptic world. Alternatively, it might just be Los Angeles. Some scenes are dreamy and whimsical such as the Chariot card, which features a woman walking two miniature elephants. Others depict ruins, such as the Three of Wands, which is quite literally a ruin. However, everything that is depicted feels like it’s all happening in the same world.

The world that Road has created is one that is full of magick, hope, and color, but is also one that is going through great turmoil and change. People are revolting, rebuilding, and fighting back against some sort of tyranny. One of the greatest strengths of this deck is that it rarely shows that oppressive force directly. The focus is entirely on this diverse cast of characters who are fighting back against it. This is their story. 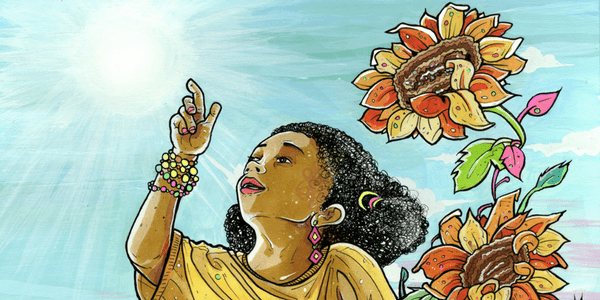 And what a cast it is! One of the reasons I was so excited to get this deck is because it had people who really looked like me. I mean, really look like me. I wasn’t alone in this. Road used her friends and other real life people as models, so the deck is brimming with bellies, a full range of gender expression, brown skin, and all ability levels and ages. This is the most inclusive deck I have ever had a chance to work with.

Each card is a sort of snapshot into what they’re doing. Some people are planting gardens, others are fixing up broken down tech. There are people minding children, and there are children creating their own destinies. People are enjoying each other, people are feeling crushed under the weight of the world. It is a full spectrum of experience.

On the tarot side, the four suits remain the same, except that pentacles are represented by crystals, when they do appear. Road does not stay by traditional tarot imagery. The suits feature many people, but the artist has reimagined many of them in the context of healing and social justice. She removes much of the negative images and replaces them with ones that would give hope to the reader instead. This isn’t to say that all the cards are “love and light,” quite the opposite, actually. The cards are full of turmoil, but it is a different type than what traditional tarot generally shows.

In fact, she’s assigned keywords to the minors that indicate what the focus of the card is, more like what is seen in a Thoth deck but this deck is clearly Rider Waite Smith inspired. On all cards, save the court cards and aces, there is astrological information to help aid your reading.

The majors are all standard and closer to classic imagery, far more so than the minors. However, there have been changes made to the names of the cards. The Hierophant becomes the Teacher, and the Tower is now Revolution, for example. These changes keep in the spirit of the theme of these cards.

The guidebook that comes with it is very plain, despite the colourful and intricate nature of the cards. There are no pictures, there are no spreads. It doesn’t waste time going over the history of tarot or advice on how to use these cards. Instead, there’s an amazing manifesto about who and what the Next World Tarot deck is. Road outlines from the gate that this deck is a magical love letter to marginalized folx.

The card descriptions are all fairly long, and explain how these familiar archetypes function in a time and space for resistance. The descriptions are rewritten in such a way that they are about support and helping the reader make it through, and less about symbols. The book lets you know that pentacles are about redistributing wealth, wands are about survival, swords are fighting back, and cups are building community.

Tarot generally looks at a small scale picture of the of querent’s life. Next World shows images of a world and indicates that actions are happening outside of the self that affect how we live our lives, and the choices we have to grow and move forward.

I think that these cards would be amazing in an experienced readers hands, but I also think that someone who has never read tarot before, but wants to envision the world differently could also be inspired by these cards.

Ultimately, I feel like the New World Tarot speaks to today more than any other deck I’ve ever worked with. The images are contemporary, it features a spectrum of diversity and is incredibly hopeful, even when it’s dark. It is a spectacular and unique deck.