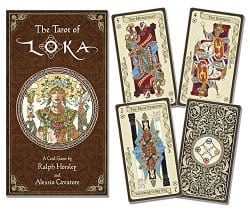 Loka is an ancient Sanskrit word meaning world, realm, or level of consciousness,1 an apt choice for an elemental fantasy game or tarot oracle, but there is no Vedic symbolism on the cards as might be expected. “Good” and “Evil” cards are a clever and original addition to the major arcana, making 80 cards instead of the usual 78.

The major arcana are resplendently prominent in this deck, but their divinatory meanings are not. Marketed primarily as a game, the Tarot of Loka’s accompanying booklet does not discuss tarot interpretation, but it does endorse the cards’ use for readings, if desired. Tarot purists may not approve of using the same deck for both gaming and divination, but I like the versatility. After all, divination can be done during all kinds of mundane activities. Loka might be just the thing for bringing tarot into the mainstream as a fun and safe activity. Tarot originated as a card game, so any objections to its use this way are easily refuted.

Scoring, like most Loka rules, is modelled on traditional rules of 15th century tarochi (also called tarocco or trionfi), the common ancestor of tarot and of many card games. Calculating different values for each court card seemed unnecessarily time consuming, so we decided to score them all equally to move play along. In Tarochi, the Judgement, Magician, World and Fool were called “honours” or “grandes,” and this is reflected in Loka where the Fool, World and Magician command extra points.

The chess-like Loka board game (available separately) is also reportedly flexible in its rules, and equally beautifully crafted. Playing Loka with your kids would be a fun way to familiarize them with the four sacred elements, if they are not already saturated with this fascinating, ubiquitous theme. Tarot buffs will find the historical conventions embedded in the game educational.

There are several versions of play, from simple to more advanced. The requirement for teams of two (as in bridge) is cumbersome without an even number of players, but it too has an historical basis. Odd numbers of players must adopt an extra dummy hand, from which a card is drawn randomly for each trick. We found this practice lowered the quality of the game, because the imaginary dummy player cannot observe the rules, for example by following suit (as in hearts). On the good side, sharing the table with an invisible partner does have comic value!

Tarot is exceedingly adaptable, and my family and I especially enjoyed the optional rules, which encourage creative gaming. When my children were small we devised a simple elemental game (along the lines of Uno) with a spare tarot deck from my collection. Now many years later, we happily invented a few Loka rules, and the deck lent itself easily to this. We added excitement by declaring the Fool wild and able to trump all other cards. We played a new rule for each round, while still adhering to guidelines in the booklet.

Our favourite version was the lively Good and Evil teams. In Loka, fire and water are designated as the “evil” suits, and earth and air as the “good” suits. The assignments seem arbitrary, because esoteric systems usually pair air with fire (both are conceptually masculine and light and so the obvious choice for “good”), and earth with water (conceptually feminine and dark and so the obvious choice for “evil”). I can find no references explaining the pairings in Loka; they may be a random choice, an attempt at gender balance, or an assumption that fire and water are naturally dangerous, and earth and air benign.

Endowing the trump cards with special powers according to their tarot meanings would boost the game and educate non-tarot readers even further. For example, the High Priestess might enable a player to view cards in another player’s hand, the Chariot might reverse the direction of play, and so on.

There are 10 tiny pages of rules — most of the 61 page booklet consists of multilingual translations. The final pages list the names of people who funded the original Kickstarter production of The Tarot of Loka, now published by River Horse Games and distributed by Llewellyn Worldwide.

The numbered pip cards are quite plain, playing card style, and the elemental symbols very stylized, with suits easily differentiated by colour. The suit of water is conceptualised in its frozen, icy aspect, making its jagged blue glyph a little more difficult to recognise than the flame, leaf and wind glyphs of the other suits.

The Cavalier (intriguingly depicted in all four suits as an animal) equates to the Knight, not the Page of a suit. We found this slightly confusing during play and kept forgetting whether it fell above or below the Jack, but the Cavalier is another traditional inclusion that we soon became accustomed to.

Majors and court cards are beautifully rendered in the tradition of European decks (like the Tarot de Marseille), with extra delight taken in the macabre ones. Death and the Fiend (aka the Devil) look sinister, and the court cards smack of warlord, but elegantly so. The Loka deck was clearly created by lovers of fantasy battle games, and designed with imaginative fun in mind. Not surprisingly, the illustrator, Ralph Horsley, has previously contributed work to Dungeons and Dragons games, and the designer, Alessio Cavatore, to Lord of the Rings games.

In Loka, court cards of any suit may bear any elemental emblem. The water court cards, for instance, depict imposing blue skeletons wielding not just cups, but also swords, staffs, axes and shields. Probably due to the creators’ unfamiliarity with tarot iconography and their penchant for weaponry, such features enrich detail and multiply possible interpretations, even if unintentionally.

As a divinatory tool, I found the Tarot of Loka very like reading a generic playing card deck with major arcana added. It is certainly functional for divination, but I would have liked to see more acknowledgement of traditional tarot meanings, and provision of a keyword summary in the booklet for those not already familiar with reading the tarot.

This deck reminded me that any playing cards can be read as tarot (sans major arcana) by interpreting hearts as cups (water), clubs as wands (fire), spades as swords (air), and diamonds as coins (earth). Only a few sources (notably A.E. Waite) differ on these correlations. There are several divination decks available closely resembling playing cards,2 but as far as I know none are so closely related to the original game of Tarochi as Loka.

Although the booklet claims they are marked at one end to indicate which way is upright, Loka cards can’t be read as reversed or “ill dignified.” The omission of the marking might disadvantage some readers by reducing interpretive signs, but it needn’t be a hindrance as the right spread will reveal both negative and positive meanings regardless of card reversal.

All in all, the Tarot of Loka is a great family game and a novel collector’s item for tarot enthusiasts. I expect that more tarot decks of a similar historical ilk will be released in the future, and I look forward to seeing them.