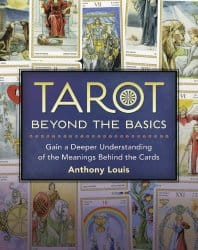 Tarot Beyond the Basics: Gain a Deeper Understanding of the Meanings Behind the Cards, by Anthony Louis
Llewellyn Worldwide, 9780738739441, 383 pp. (incl. notes, appendices, and bibliography), 2014

Anthony Louis brings us an enriching and thorough examination of the modern tarot by first introducing us to its fascinating history. He begins in China, where the paper and cards was created, then to Egypt and the Mamluk slave soldiers who played games with a deck of 52 playing cards, much like today’s playing card decks. Then he travels into Spain where the court cards are changed to include Kings, horsemen and pages. In Italy is where the queens were added and the church became involved in their design.

Many readers of today have heard the rumours that the tarot is originated from the Egyptian pantheon, or that the 22 major arcana cards reference the 22 letters in the Hebrew kabbalah. Louis notes that this assumption appeared in an unsubstantiated paper that was published in Paris in 1781 by clergyman Antoine Court de Gebelin and the French occultist Comte de Mellet.1 The only reference that Louis could find about the tarot originating in Egypt was through the Mamluks and their love of playing cards.

In addition to Louis’ ability to bring to light the history of the tarot, he also has a way of expressing the deeper meanings of the cards in a way that is easy to follow. He first presents an idea and provides a sample reading using the common Celtic Cross spread. Then builds on that original concept throughout the rest of the text and reinforces the new information through examples using a more simple past-present-future layout. He also includes charts and tables to make it easier to comprehend the many connections he weaves. His work is well sourced, as indicated by the footnotes, and bibliography.

Louis states that this book is written for the intermediate to advanced tarot reader. The subject matter is detailed and can be difficult to follow, but is made easier by Louis’s use of charts, tables, and examples. His writing style, which is in the first person, eloquently demonstrates his desire to share his knowledge for the benefit of others in a way that is easy to understand.

Louis ends the book with an epilogue that offers another detailed sample reading where he uses the techniques and references he presented earlier. He goes on to explain that what he has shared with the world in this book is a reference for the rest of us. He acknowledges that each reader is different, and while some readers avidly use numerology in their readings, others might incorporate astrology, or even simple intuition. All have their place and all are valid.

Three appendices also included. The first is the combination of all the astrological, elemental, and numerological references and keywords in chart and table format for every card in the tarot deck.2 The second appendix details the original card placements and representations of the Celtic Cross spread, a method of divination devised by Arthur Edward Waite in The Pictorial Key to the Tarot. Finally, in the third appendix, he includes more charts and tables depicting the element correspondences and timing for the minor arcana (aces through 10s) and court cards (pages through kings).

As an avid tarot reader myself, I found this to be a very informative and handy book to have! It even inspired me to pull out my many tarot decks to begin making my own comparisons. I use the Cosmic Tarot by Laura E. Clarson, and because I am so familiar with this deck, I found it easier to associate the examples described in the text with the Cosmic Tarot rather than with the Universal Tarot pictured throughout the book. Due to the detail Louis provides, I was able to pick up much more information from the cards than I normally would, such as how the balance of the elements in the spread can contribute to the overall reading. I had always balanced things in a reading, for example, by how noting how many pentacles there were as as opposed to cups, but I didn’t equate it quite the same way as adding dry or wet compared to hot and cold. The charts and tables included in the appendices will be very handy. I am looking forward to having many more opportunities to use them to assist me with more readings in the future!