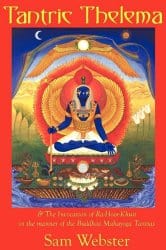 Tantric Thelema: The Invocation of Ra-Hoor-Khuit in the Manner of the Buddhist Mahayoga Tantras, by Sam Webster
Concrescent Press, 9780984372904, 115 pp. (incl. appendices, and select bibliography), 2010

Sam Webster co-founded Chthonic-Ouranian Templars of Thelema in 1985, and is an initiate in the Golden Dawn, Wicca, and Buddhism, among other things, though he is probably best known for founding the Open Source Order of the Golden Dawn in 2002. The OSOGD is based on the principles of open-source software, which allows users to modify and adapt programs as needed, and so it is in the Order.

It’s no surprise, then, that Tantric Thelema is an eclectic text. Webster acknowledges that he’s not a lama, that the practices described are based his own work and teachings, and these are provided to the student as tested material, but can be repurposed as needed. He describes his practices, notes their origins, and where the material deviates from ancient Egyptian, Golden Dawn or Thelemic custom, and it is very obviously a lived practice.

The book is dedicated and addressed to his late wife as a lecture or dialogue where she is represented as an italicized voice who offers loving interjections at points, and asks for clarification which Webster provides. It’s an odd format, but touching all the same.

Webster adopts Liber al vel Legis as a tantra for the purposes of the present book, and Tantric Thelema is intended as an intermediate or advanced text, as it assumes a familiarity with Thelema, contemporary Paganism, and a certain level of knowledge and skill with ceremonial practices. This work is centred on Ra-Hoor-Khuit, and his feminine counterpart, Ra-Hoor-Khut. I hadn’t encountered this gendered distinction before, but it could explain the differences in spelling used throughout Aleister Crowley‘s books.

In Webster’s system, the Thelemic trinity is related to their Buddhist counterparts, and Nuit is analogous to Prajnaparamita, Hadit is the inherent Buddha-nature, and Ra-Hoor-Khuit is the “union of entitative being (Hadit) and the world (Nuit) and is the godform or Yi-dam for Thelemites to take in their practice as a way of articulating their will,”1 as well as a wrathful Buddha. It is this last that I find particularly interesting. Liber al vel Legis says, “Compassion is the vice of kings: stamp down the wretched & the weak: this is the law of the strong: this is our law and the joy of the world.”2 Which Webster interprets as a compassionate practice, like the wrathful Buddhas who, in order to destroy the thirsty, give them drink and destroy the hungry by giving them food. Instead of the usual vicious interpretation, Thelemites are encouraged to “stamp down upon the wretched and the weak by liberating them from their suffering, and delight in it.”3

Numerous Buddhist practices have been translated into Thelemic forms, such as taking refuge, the dedication of merit, vow of purity, and two central rites: Generation in Front (an evocation of Ra-Hoor-Khuit) and Arising As (an invocation of the same). It’s an unlikely amalgamation, but it seems to work.

This is a manual of practice, detailing Webster’s journey and experiences with Buddhist practices such as mahayoga tantra and as a ceremonial magician, and finding links between the two disciplines. For much of his he relies on Stephen Beyer’s now out-of-print book, The Cult of Tara (which has been duly added to my reading list), in marrying ceremonial magick with Buddhist practices.

Towards the end of the book, Webster warns, “Beyond Here, Dragons,” to separate the rituals and work that is untested or not yet as vigorously tested as the earlier materials. In the untested materials, a rite of sexual union is offered and deemed “especially suited for a heterosexual couple,”4 though there is nothing obvious about this rite that people of any gender or sexuality could assume either role. Likewise, in the group ritual, there is gendered language that harkens back to Aleister Crowley’s Edwardian gender biases, and it seems unnecessary in the 21st century. Fortunately, if one assumes this work is also open source, these items can be rewritten to better suit more modern and diverse practitioners.

Tantric Thelema has a lot to recommend it, and it’s a remarkable text, and perhaps the most complete integration of Buddhist and Thelemic thought.