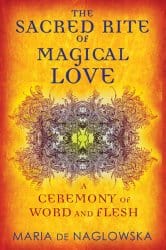 Maria de Naglowska was a Russian-born writer, translator, and journalist living in Paris in the 1930s, and this is the third volume in the series of Naglowska’s books Donald Traxler has translated.

Unlike the first two books, The Light of Sex and Advanced Sex Magic,1 The Sacred Rite of Magical Love is an allegorical novella, possibly incorporating autobiographical elements. It was first published under a pseudonym, Xenia Norval, and serialized in her street newspaper La Fleche, organe d’action magique, from 1930-1931, and later rereleased as a supplement in the journal in 1932 under her real name.

Once again we have an introduction from Traxler, which helps situate the reader in Naglowska’s time and place, and the text is extensively annotated. Traxler has also written several helpful appendices that work to make sense of her mystical style of writing.

The preface includes a diagram of the mystic aum clock, the symbolic key to her system, The Third Term of the Trinity, used by the order she founded, the Brotherhood of the Golden Arrow. The aum clock details the fall, magical union, and elevation of initiates, which she credits has having its origin in India and Egypt. A complicated explanation follows, including a numerological system central to her system. The face of the clock is counter-sunwise, and may be linked to the astrological houses of the zodiac, though the pathways between resemble the pathways between the sephiroth in the kabbalistic tree of life.

The Sacred Rite of Magical Love itself is an allegorical novella told as a first-person account of a young woman named Xenophonta (nicknamed Xenia), who engages in a mystic dialogue with a dark force called the Master of the Past, and her relationship with a 24 year old Cossack named Misha. Xenophonta’s parents are hosting guests, including the young Misha. Early on, Misha violates her while she sleeps. At first shocked and ashamed, she comes to believe that he was sent by this Master. She has a vision, and takes up automatic drawing, out of which comes the aum clock, and poetry that she also records.

Xenophonta decides to attend the dance, and dresses to impress Misha. They make plans to escape to the woods, where she is secretly awaiting a rendez-vous with the Master, who has told her he needs a man and a woman for his purposes. They make for the woods, and Xenaphonta is overcome with passion, and Misha is thus delivered. At some point during the journey, she falls unconscious, and Misha once again enters her while she’s out of it. Speeches are made, and their union is deemed holy, after a fashion.

This story is described as an initiatic allegory, but it seems more than a little strange that during these passionate rites, Xenaphotna is unconscious and not actually able to physically partake in them. However, it is in keeping with Naglowska’s earlier proscriptions for women during the rite; in Advanced Sex Magic women are expected to remain “cold and mute” during union. I find that troubling, especially as with Xenophonta’s first interaction with Misha, it’s described as a violation, an attack on her sovereignty, and yet she begins to defer to him more as the night goes on, until she is happily (?) unconscious during their ultimate union.

Familiarity with the previous two books is not a prerequisite for reading The Sacred Rite of Magical Love. Naglowska provides a final tract that describes the new religion, and Traxler’s always excellent notes and appendices expand upon her mysticism, teasing out possible meanings and associations.

The Sacred Rite of Magical Love is another fascinating addition to Maria de Naglowska’s body of work available in English, though it may be triggering to those who have suffered from sexual violence.