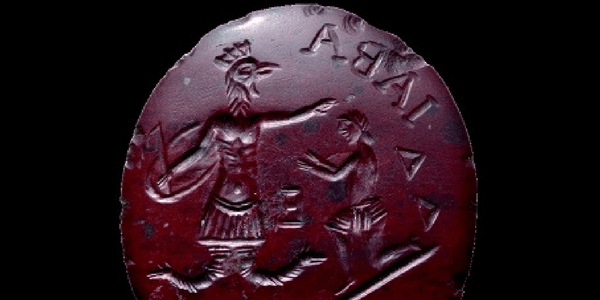 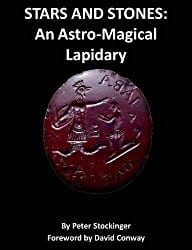 Correspondences are a common part of modern magical thought.  Most 101 books contain at least a handful of correspondences linking planets, elements, herbs, and stones.  But with the exception of works like Alesiter Crowley‘s Liber 777 and its expansions there hasn’t been a recent book that really delves into correspondences, and few really explain how they work or what they’re for.  It seems that depth was lost around the time of Henry Cornelius Agrippa.

Peter Stockinger, of the Stars and Stones Traditional Astrology blog, wants to set out and give readers a practical, focused guide on using gems and metals to work on astrological issues as revealed through a person’s horoscope.  The premise itself is simple: your personal horoscope reveals your strengths and weaknesses as shown through planets, elements, and temperaments.  Then, using corresponding stones and metals you try to balance out or strengthen your weaknesses.

My main inspiration for writing this book was to reintroduce the reader to the idea of correspondences and correlations between planets and gemstones.1

The premise itself is simple, unfortunately the delivery of the information is not simple, and this isn’t due to the complexity of the material itself, but more from the layout.  Stars and Stones is from a small independent publisher, and the structure, problems, and errors in the text seem mostly to be from a lack of proper editing and proofreading.  The book could be great, but as you’ll see the editing leaves a lot to be desired.

The book begins with an introduction to the Neoplatonic world view, the process of emanation from a divine unity, and how that relates to the elements, and the zodiacal signs. Then immediately after this introduction we’re given a case study. It’s out of nowhere; we still haven’t been given context on what the book is for yet, and we don’t know enough to make use of it. It’s not just that it comes too early, but in the way it’s not addressed and just there — it honestly seems more like it was put in the wrong spot.

In fact the next three pages trying to explain the case study support this idea. They mention that “Mercury and Venus are the strongest planets in [the subject’s] nativity,”2 even though how to figure that out isn’t discussed for another 30 pages. Likewise, “We remember what we said about the choleric temperament before,”3 except the temperaments haven’t been described yet and won’t be until the next chapter. The case study goes on to mention that all the planets have positive values,4 but again, this isn’t discussed for another 30 pages or so.

That isn’t the only time that the editing interfered with allowing the book to be functional. The book is littered with mistakes, omissions, and general problems that I think could and should have easily been addressed with a proofreader who was trying to make use of the book.  When listing the temperaments of the different astrological forces, the sun and moon are completely forgotten5 and the chart of temperaments provided conflicts with the correspondences on the page before.6 The Dignities and Debilities chart has a formatting error with the headers being in the wrong places, making it useless, and it is missing information like Jupiter being in his fall in Capricorn.7 The book also includes two conflicting charts of planetary colours, not explaining why one is used over the other,8 and it provides a blurry diagram to explain the spheres that is nearly unreadable and could have easily been redrawn.9 Furthermore its explanation of the Lord of Birth is extremely vague, saying “this will be explained in great detail in the chapter Dignities and Debilities,”10 but the great detail is the incomplete and misformatted chart mentioned above and two other charts from William Lilly‘s Christian Astrology, with no explanation on how to use them or what the terms mean.11

Outside of the editing errors, there are a few other problems with the book feeling unclear or incomplete.  While several fairly helpful case studies are given, the diagnostic method Stockinger uses isn’t very clear, and he doesn’t explain what the reasoning behind his process is.  Sometimes if a temperament or planet is very strong he chooses to find a stone to mitigate it, other times it is a weak point that is strengthened.  While the temperaments play an important role in the diagnosis, the stones are categorized by planet so it’s hard to see why Stockinger focused so much on temperaments, but didn’t list or infer them for the stones as well.

I love the concept of this book; I like the expanded use it brings to Renaissance astrology, and it neatly dovetails into a lot of my magick praxis. Stars and Stones is a book I want to like, and a book I want to make use of. Unfortunately its current shape makes it hard to do either. If a revised and expanded edition ever comes out I will gladly buy it.