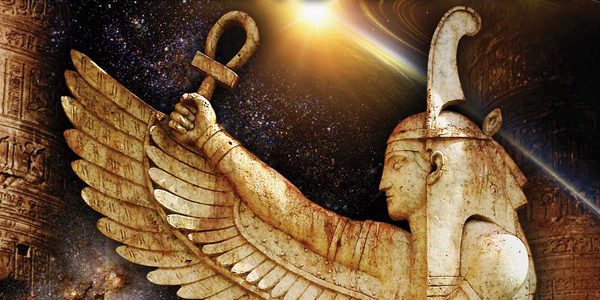 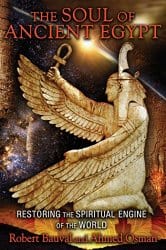 Over the course of Egypt’s lengthy history, many cultures with different belief systems have occupied it. The Soul of Ancient Egypt by Robert Bauval and Ahmed Osman is an exploration of the nation’s history and how various religious leaders have impacted its development.

I picked up the text hoping to learn more about the original beliefs and people of ancient Egypt, and perhaps how those beliefs impacted modern Egypt. That’s not really what this book is about. Instead, it’s a history of Egypt’s religious development. Nevertheless, it is a fascinating read.

The book begins in ancient times, covering the relationships between the people’s beliefs and their gods, and their relationship to the land. This book provides a very tidy introduction to the Egyptian pantheon and later the text goes into how some of these beliefs were restructured as more foreigners entered the region.

However, it wasn’t this introduction to the ancient religion that was the focus of the overall work. What was important from Egypt’s early history, and as it exists thematically in the book, is the concept of Ma’at: a philosophy of cosmic order that protects against chaos. The belief dictates that there is an overriding order to the universe. As long as you follow that line as set by the gods and written in the stars — astrology was very important to the ancient Egyptians — then things would work out. By that token, it is when we deviate from Ma’at that we invite chaos into our lives and things begin to go wrong.

For example, the yearly flooding of the Nile is considered one of the most important aspects of Ma’at, and for good reason. The flooding of the Nile is what makes Egypt a prosperous land. It not only brings water to what would otherwise be a desert, but it also deposits nutrients to make the land rich for farming. This process is part of Ma’at, but the river has been dammed since 1968, which disrupts Ma’at both spiritually and in a very physical way by destroying the natural balance of the land.

Bauval and Osman posit that the modern day unrest in the country has resulted in part from Egypt as a nation moving away from Ma’at. Their theory is covered in the first chapter, and at that point, this book sheds any semblance to a spiritual work and becomes a history.

Through the course of The Soul of Ancient Egypt we learn how Christianity and Islam were introduced to the country. Very little is mentioned of the original beliefs because they were quickly suppressed by these other religions. Following the history, it speaks of various invasions and rulers, and how their actions altered Egypt and moved it further away from Ma’at. Reading these sections was very interesting, because despite the text’s focus on a singular country, the early chapters of the work demonstrate how interconnected all of the Abrahamic religions really are. With that in mind, one of my favourite lines from this text is about adherents of Western religions learning to live in peace with one another:

It is high time that all who live in the Arab world recognize that Jews, Christians, and Muslims have common religious roots at the descendants of the patriarch Abraham and that they all, therefore, place their faith in the same Supreme Being, be he named Jehovah, Dio, Dieu, God, or Allah.1

Towards the end, the book circles back to the concept of Ma’at, but not as originally presented. Instead, it becomes a concept divorced from its origin and is a general practice to promote order and a better standing for the Egypt’s people. At its conception, Ma’at was an intricate part of the ancient spiritual beliefs of the land of Egypt, but despite no longer worshiping the gods and goddesses of that time, the idea of balance in the land is still a powerful one. The authors offer the ideals behind Ma’at as a way to help settle turmoil in the area and build a stronger nation.

The Soul of Ancient Egypt is extremely well written, easy to follow and thoroughly researched; however, I wouldn’t recommend it to anyone who was interested in the beliefs and spirituality of ancient Egypt. The first chapter provides a great crash course, but the book as a whole is focused on historical and political matters. Religion plays a role in this because Egypt is and has always been a religious nation, but the crux of this book is about the political and religious history of Egypt.

A fascinating read, The Soul of Ancient Egypt would be excellent for anyone interested in history, specifically in the ways regions are shaped through religious politics, and the impact industrialism has on a country.