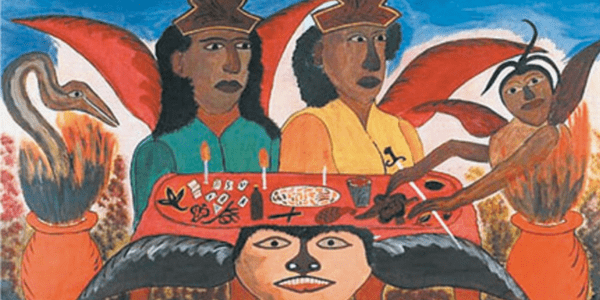 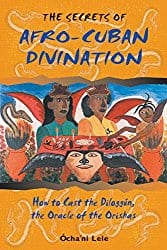 The Secrets of Afro-Cuban Divination: How to Cast the Diloggún, the Oracle of the Orishas

Although I have had readings done for me in the past, The Secrets of Afro-Cuban Divination has helped to open up the experience. Had it been available 20 years ago, I’m sure I would have gotten even more from my first readings. I’m not sure about the wisdom of providing this depth of information to those not associated with the religion. One needs to be immersed in the culture, in my opinion.

The author intends this book as the introductory volume in what must ultimately be a much larger exploration of the subject. No one volume can truly give the information, background, stories and accessory data which make the reading of the shells such an intense experience. He speaks from experience, rather than theory, which is the only way to explain this complex system.

This book is aimed at followers of the Lucumi faith. While it is possible for others to use this method of divination, it seems to me that an immersion in the culture and belief system is an integral part of the experience. There is much more to this system of divination than the mere words on paper.

It is important to realize that this system of divination relies not on psychic ability, but upon a set of living, growing traditions. This way of communicating with the universe relies on proper forms of address, proper attitudes of respect, and proper interpretation of the responses received. Pronunciation of the invocations and prayers is expected to be correct; rhythm is important; reverence is paramount. This is not a system to be used in a frivolous manner. If you want to know if your lover is true to you, get out your Tarot cards. If you want an overview of the major influences in your life, this may be the system for you.

The prayers are given in the traditional language of the Lucumi, as is proper and traditional. Some of the information contained in them needed to be fine-tuned (assuming you know which orisha is your parent). If that is unknown, generic prayers are given.

Those who never been exposed to the Lucumi religion, and specifically to diloggun, will probably find the procedure confusing. It is far more involved than most commonly used system, takes far more preparation for the readings, and is far more exacting in the procedures to be followed, and the sequence to be adhered to. Do not even consider learning this system if you are at all impatient. There is much to be memorized, and perfected, before one is competent to use this system.

The Secrets of Afro-Cuban Divination is best used as an adjunct to learning at the knees of an experienced practitioner. I would go so far as to say that this is the only practical way to learn this system.

The first 54 pages of this work lay out the groundwork which needs to be carried out for each reading. This is the smallest part of the book, yet it is vitally important. There are no shortcuts in the diloggun system. Once this section has been absorbed, it is time to move on to the possible results.

There would be little point to discussing this part of the book, as it makes far more sense to see it as a teaching tool (which it is), and not as something to simply read.

This book concludes with samples of readings; a short list of mail order sources of supply (unnecessary if you live in or near a large city); a thirty page glossary which, while not extensive covers all the basics; three pages of suggested reading (with comments on some of the more “popular” treatments); and an index.

This book should be considered as a start of a library devoted to the divinatory systems used by the Lucumi. There are several other volumes which should be included in such a library, and this author has promised to produce at least some of them.

The Secrets of Afro-Cuban Divination not a book intended for the general reader. Rather, it is intended for a relatively specialized audience. For that audience, however, it is one of the best, clearest, explanations of that divinatory system I have ever been exposed to. If you are very interested in learning about the diloggun system of divination, this book will provide you with an excellent start on the path.