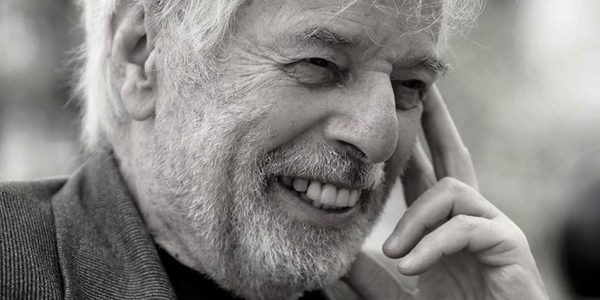 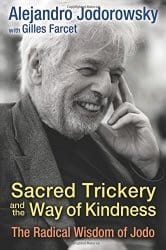 Sacred Trickery and the Way of Kindness is a collection of interviews with and about Alejandro Jodorowsky (“Jodo”), a surrealist filmmaker, theatrical icon, bande dessinée author, tarot worker, and creator of metageneology and psychomagic.1

The core of the book is an introduction and interview originally published in 1989 as “La Tricherie sacrée.” In 2004, this was expanded with a supplementary introduction, a shorter re-interview, which took place in 2003, as well as interviews with third parties, and a brief epilogue. Now, in 2016, the entire work has been translated to English and released as Sacred Trickery and the Way of Kindness.

All of the interviews are conducted by Gilles Farcet, who identifies as a journalist, author, musician, translator, and student of the late Arnaud Desjardins. Desjardins, who is both interviewed and mentioned a number of times throughout the book, was a former television producer who founded a series of ashrams in France.

The interviews with Jodorowsky, both in 1989 and 2003, are unstructured and cover a wide range of topics, from Jodo’s youth and various careers to the numerous personalities he’s met over the years and his own eclectic spiritual practices. The title of the book refers to two components of Jodo’s attitude toward interpersonal interactions: “sacred trickery” refers to deceiving with good intentions, while the “way of kindness” refers to simply helping the people you interact with however you can.

Readers looking for instruction, whether in these attitudes or in Jodorowsky’s tarot methods, psychomagic, or metageneology will not find any in this volume. What can be found by in the interviews and testimonials is Jodorowsky as he presents himself and as those who are fond of him see him.

Farcet, the interviewer, is particularly fond of Jodrowsky, even in 1989 when he is meeting him essentially for the first time. He verges on sycophantic in his introductions, and I find the constant slew of superlative adjectives and colourful epithets he applies to Jodorowsky overbearing. The book as a whole reads essentially as an homage. Both Farcet and Jodorowsky engage in frequent name-dropping, recounting personal encounters of varying length with figures including Carlos Castaneda, Arnaud Desjardins, Lee Lozowick, Pachita, Ejo Takata, David Carradine, and Stan Lee, as well as figures from Jodorowsky’s work life, such as Marcel Marceau, Moebius, and the Beatles (who funded a few of his films), among others.

I refer to this as “name-dropping” because with the exception of his work colleagues, named persons’ interactions are almost uniformly brief and of uncertain significance. Many of the anecdotes follow a similar pattern: Jodo meets someone we are inclined to think of as important or spiritually significant, and they are instantly impressed by him. I interpret this as an attempt to validate Jodorowsky’s own credentials by association with the spiritual authority and fame of the figures involved, which is complicated by the brevity and lack of depth to the interactions.

Carlos Castaneda, for example, while deemed important enough to have made the rear cover copy, only met Jodorowsky twice,2 but was very impressed by him. Lee Lozowick, an American guru and (alleged) rock musician visited Jodo’s house once or twice.3.Arnaud Desjardins is referenced throughout the volume, and yet in his own interview he admits “even though I feel close to him, I have not met Alejandro very often. In fifteen years we have only seen each other a few times…”4

It is notable that many people who have had only few or brief interactions with Jodorowsky espouse a feeling of closeness and gratitude towards him. We needn’t take Jodo’s word for it either, as the third-party interviews that comprise the third part of the book corroborate this pattern. It speaks, I think, to his charisma that he is able to make lasting connections so quickly. In his own interview, Arnaud Desjardins comments on Jodo’s social graces: “What struck me each time was his way of adapting himself, taking stock of the situation as a whole…He knows how to be present with other people, and his tone is always correct.”5

These social skills are enabled by a flexible attitude towards self-presentation and honesty: “Up to age fifty I did a lot of good for a great number of people while imitating generosity… So what does it matter? The work is what’s important.”6 Jodorowsky’s focus on achieving outcomes regardless of his internal state or the means he uses to achieve those outcomes provides him with a powerful social tool.

This idea that the ends justify the means also arises when discussing the surgery the sorceress Pachita apparently performed on him and others. He says, “It matters little whether these operations were real or fake: the results were there. With regard to magic I am not so concerned with the authenticity or illusory character of the phenomenon. What interests me is the outcome.”7

This attitude is the essence of the titular “sacred trickery”: falsehoods and deceptions are unimportant, so long as one’s intentions are good and the outcomes are positive. The attention paid to positive outcomes pervades the book and leads to the Achilles heel of his perspective, for in addition, he states: “in my case I have no desire to talk about my failures.”8 He may believe he is accomplishing a lot of good, but if failures or harms are not also discussed and accounted for then it is impossible to know where the balance lies.

His fluid self-presentation also makes his statements difficult to evaluate. For example, regarding his life in general he says, “Really, perhaps I have just been lucky. I have never been seriously ill; my children are all good to me; I have never had to deal with serious problems. Life has been good to me: I never served in the military and only began very late to pay taxes. I have never worked but have always done what I enjoyed, meeting with relative success each time.”9

This humble observation of privilege provides a basic illustration of his inconsistency: while here he states that he has “never worked,” he describes in the earlier in the same interview how he had to work as a house painter for a number of years to pay the bills.10 Jodorowsky’s attitude towards deception and the inconsistencies of his behaviours and avowed beliefs make it difficult to evaluate or learn from his statements or judge the merit of his suggestions and attitudes. As such, the two interviews with Jodorowsky can be read for entertainment value, and there is some, but I wouldn’t recommend them for any other reason.

The third part of the book is comprised of four interviews and one letter. Farcet introduces and interviews: Philippe Manoeuvre, a music journalist; Coralie Trinh Thi, an author, director, and X-rated film actress; François Boucq, a bande dessinée (BD) artist; and, Arnaud Desjardins. All of these individuals speak highly of Jodorowsky, telling of the ways in which he’d influenced their lives.

Manoeuvre collaborated with Jodo on a magazine and values his knowledge of tarot. Trinh Thi met Jodo through Manoeuvre and has benefited from his tarot and followed some of his psychomagical recommendations. Boucq collaborated with Jodo on a number of BDs, and has the most to say about Jodo the day-to-day person. Desjardins’ interview is the shortest, likely because as noted previously, he hadn’t actually spent much time with Jodorowsky. Finally, there is a glowing letter from Jodorowsky’s son, talking about how loving his father has been.

I find it interesting that each of the first three spontaneously address the idea that Jodorowsky might embody the negative connotations of the word guru11 noting that while Jodo may fit much of the profile, they do not believe he profits financially from his spiritual efforts. The picture they all paint is of a selfless man who works intuitively and appears to do his best to share those intuitions with whomever he meets. The epilogue, which Farcet describes as a “Jodorowskian pirouette” is a few pages of Jodo interviewing Farcet.

Sacred Trickery and the Way of Kindness is a fascinating and frustrating view into the life and self-presentation of a curious figure. Fans of Alejandro Jodorowsky will undoubtedly find it enjoyable, whereas others curious about him might be better served waiting for a proper biography to appear.