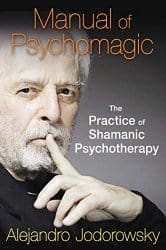 In essence a self-help spellbook, Alejandro Jodorowsky begins Manual of Psychomagic with a brief introduction outlining his perspective. He believes that many of an individual’s problems (including physical ailments such as psoriasis, cancer, and infectious disease) stem from the effects of misguided parental actions and sociocultural restrictions on one’s unconscious. To allow one’s unconscious to release the tension it holds one must undertake a dramatic ritual. Through the ritual’s performance and the symbolic fulfillment of desires or release of bonds, the unconscious will be satisfied and one’s problems will dissipate.

Jodorowsky’s method is as follows: he uses the tarot to discover and diagnose a consultant’s issue and then prescribes them an act to undertake. He states explicitly that psychomagic is not in fact magick, but acts directly on the individual’s psyche. Unfortunately Manual of Psychomagic suffers from a number of endemic flaws — including one piece of critically misguided advice.

The first section of the book, “Tips to Heal Your Life,” is a laundry list of 80 potential issues or symptoms — for example, mothers who criticize by telephone,1 sexual abuse,2 and morning sluggishness3 — each followed by an example ritual. Despite the basic premise of psychomagic being to speak directly to the depths of the unconscious, much of Jodorowsky’s analysis and prescription comes across as superficial. Although many of his rituals seek to clear what he views as the root cause of a consultant’s difficulty, even tracing said cause back multiple generations, he is equally likely to attempt to treat symptoms without regard for their cause. For example, his take on addiction involves attempting to convince the individual that they are capable of breaking free,4 and if that fails, making the individual feel guilty for the harm their addiction causes.5 A psychomagical approach consistent with the principles he espouses should consider the ontology of the addiction and look at what need it is fulfilling. Similarly, he prescribes a fix for a “fear of insanity” without questioning where in the world such a fear comes from.6 Furthermore, there already exist good, established methods for treating symptoms: cognitive-behavioural therapy for example is highly efficacious, as is mindfulness meditation. Unfortunately both of these methods are a lot of work and they take consistent applied effort over time.

One of the prescribed rituals in “Tips to Heal Your Life” is at best child abuse, at worst felonious. In approaching anorexia, he states that treatment is best done by a physician. He does however believe that psychomagic can play a role in helping someone with anorexia see themselves more clearly and motivate them to comply with treatment. He alleges that he has had this exact method meet with success:

He says, “The shock this fake abduction produced in the girl caused her to be disgusted by her food regimen and her skeletal body and to show gratitude toward her family for having gathered so much money for her ransom, forgetting her grudges for not having felt cared for. Finally, she readily agreed, with the desire to heal herself, to submit to a diet under medical supervision.”7

The following chapter is much briefer: “Tips to Heal Society” comprises but 10 rituals and its inclusion is perplexing. Given that the premise of psychomagic is action upon the individual, upon whom are the happening-like rituals described in this chapter intended to act? Jodorowsky, having created psychomagic, includes these acts within its umbrella, but they feel out of place in this book.

The last chapter, “Psychomagic Consultations,” is a compilation of case studies: brief descriptions of a consultant’s problems and the ritual Jodorowsky prescribed for them. Jodorowsky mentions that he asks his clients to send him a postcard if they are successful, implying that the rituals described in this chapter have been effective. A large proportion of his case examples focus not on psychological change within the consultant, but on affecting behavioural changes in third parties. This kind of external problem solving appears incompatible with the creed of psychomagic and is characteristic of the inconsistency of his approach.

Even his use of symbolic action is inconsistent. Having sex with your partner while they wear a mask of your mother’s face may be a way to symbolically have sex with your mother, but having your parents kiss you and say they approve of you isn’t symbolically getting their approval: it’s literally getting their approval.8 Many of the rituals lose the guise of symbolism altogether and devolve into performative histrionics, e.g.: honk a car horn until your mother is looking, douse yourself in blood, yell that you are not your father, fuck your girlfriend in the car, then go inside and introduce her to your mom.9

A brief appendix is included, titled “Advice for Future Psychomagicians.” Jodorowsky states that the practice of psychomagic is an art, not a science, and the prescribing psychomagician must take great pains to develop themselves and their art. As such he includes aphorisms, maxims and imperatives for a developing psychomagician to study and uphold. Despite requiring that a psychomagician be well studied, Jodorowsky exhibits a shallow understanding of the fields which border his own: he repeatedly says “magic says”10 and provides an example spell, seemingly oblivious that magick of any kind is far from a unified field. Likewise his impression of psychology is limited to the most anemic sort of talk-therapy. A better understanding of the breadth and application of either one of these fields could have informed and balanced his diagnosis and prescriptions. The word shamanic is bandied about in the cover copy but his methods are far from. He has produced the homeopathy of self-help: a self-indulgent echo chamber that exempts itself from any form of rigour.

If psychomagic has a place in personal development, it is in cooperation with other methodologies. Outside of travelling to the cafe where Jodorowsky gives his free tarot readings, he provides no method, scientific or otherwise, for homing in the nature of one’s mental issues. Introspection, dream work, and psychoanalysis are all candidates for this portion of the work. Once one has identified at least one issue, psychomagic’s principles could, in theory, serve as an ice-breaker, shattering fixed structures and patterns of behaviour. After that fracturing, however, one is left adrift and psychomagic provides neither engine nor sails. Further support and maintenance is necessary to ensure old patterns do not reassert themselves and that the new structures that replace them are balanced and healthy.

If one wished to adopt some of the principles of psychomagic, I would still not recommend this book. Spell books have utility in that they provide beginners with a likely or viable method for success. Those who cannot yet construct their own spells, or who do not wish (for whatever reason) to do the basic materials and association research can take a pre-constructed spell and have it work for them. This is not the case for Manual of Psychomagic. Jodorowsky’s methods are unique and his advice bears as much potential to cause harm as to heal. Anyone who is capable of parsing which methods are bad and which are good would be equally capable of constructing their own psychodramatic ritual.