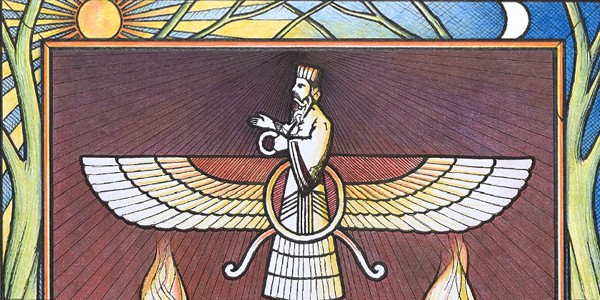 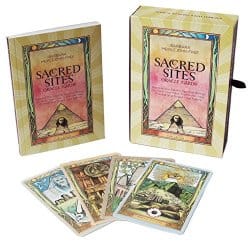 Have you ever been affected by a place? Visited an area said to be an energy vortex, or even an old cemetery, and received impressions, visions, vibes? The experience can be overwhelmingly powerful, as Barbara Meiklejohn-Free describes in the introduction to this deck. Her strong connections to sacred places around the world gave her the idea for these unique and well-crafted oracle cards. The Sacred Sites Oracle Cards are at once a tribute to these irreplaceable sites and a way to access their ancient and transformative energy.

Meiklejohn-Free chose 53 sacred places around the world for their spiritual and historic significance. Some are world famous: Giza in Egypt, Machu Picchu in Peru, Stonehenge in England and the Grand Canyon in the United States. Others are less well-known: Ateshgah in Azerbaijan, Mount Tai in China, Tongariro in New Zealand and Tiwanaku in Bolivia. Her descriptions are informative, woven into mystical lore pertaining to the oracle card, and would whet the armchair traveler’s appetite for exploration just as much as the spiritual seeker’s.

Strengthening our connection to these lands and their rich histories is her mission with these cards, as she writes on page 9:

In many parts of the world […] the continued existence of these places is under threat. Before we lose all our sacred sites, the repositories of our planet’s ancient past, it is important we keep the myths alive. We can do this by visiting these sites, either physically or through our imagination, by focusing our intent on them and connecting with them through ceremonies.

To facilitate this, each card message contains a suggested ceremony, activity or visualization that enhances the theme of the card.

The author is a shamanic practitioner and has used two of shamanism’s central principles — the three-world system and honoring the four directions — as a way to organize the cards. The three worlds are comprised of a Lower, Middle, and an Upper World that shamans journey to so they can receive information and answers to questions. These worlds have been translated into areas on the cards corresponding to past, present and potential (future), respectively. To my knowledge, this is the first and only deck that incorporates a past-present-future reading in one card.

Don’t worry if you know nothing about shamanism. You don’t need to, because the three-world system is explained just enough so you will be able to work with the cards. As you do so, and by reading the card messages, you’ll come to understand the nuances of each world and its area on the cards. 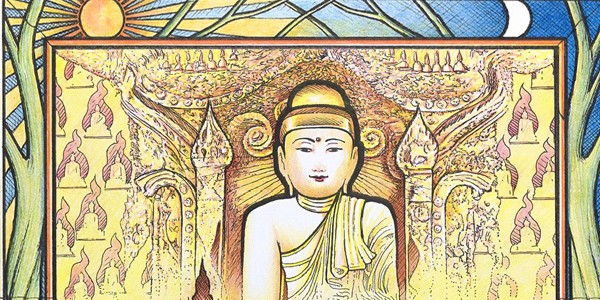 Fifty-two of the cards are sorted into the four directions — North, South, East or West — with each direction given its own color corresponding to the pages in the book that describe the card. Each direction denotes a personal trait and quality, such as “wisdom seeker” for the North. The remaining card, the power card depicting Mecca in Saudi Arabia, is not linked to a direction and instead indicates that the next card drawn is of great importance to the user, so pay attention!

The box, booklet and cards are quite beautiful and imaginative. Drawn in pastel colours by illustrator Yuri Leitch, each area of the card is distinct yet blends with the other two to create one comprehensive whole. A power symbol drawn on the card is a unifying feature between the three areas, signifying the overall theme of the card.

There are no suggested spreads because each card is designed to be a complete reading. I drew several cards for one question to get additional information, which was consistent among the cards. Meiklejohn-Free  says that if you draw several cards of the same direction this means you should pay special attention to the meaning of that direction, which she explains in the section on how to use the cards. The ceremonies and activities are also designed to give you more information about your questions without having to draw additional cards.

This deck is multi-leveled, on purpose it seems, just like the sites it draws upon for inspiration. You can be informed by the physical presence of the places depicted, their spiritual or historical significance, the culture that surrounds them, the information you receive by journeying there (either in real life or in a shamanic journey). You can receive other levels of information on how the card relates to your question by applying the directional and power-symbol information, and the information you receive through the ceremonial exercises. If you’ve done any in-depth study of any of these places, you can apply that to your question as well. I found I needed to keep a pad and pencil by my side as I worked with them, because it was simply too much information to keep track of in my head.

But perhaps the most important pieces of information will come not from your head, but from your heart. Perhaps you’ll experience a déjà vu moment as you look at one, or an overwhelming emotion or bit of wisdom that will explain a life mystery you’ve been grappling with. Such is the power of sacred places, tapped into so well by this oracle deck, to take you out of your ordinary reality and put you in a transcendent state where you can see more clearly, from a different perspective. If you’ve never had that experience, you can now.