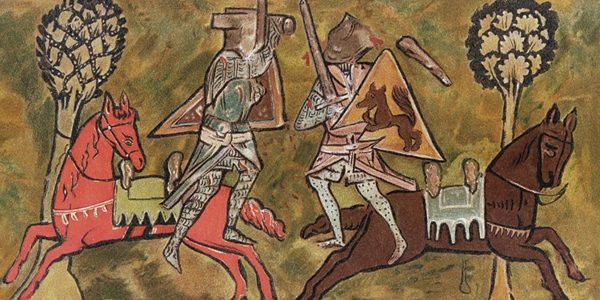 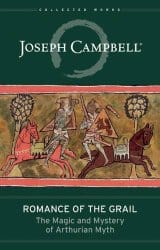 I fell in love with Arthurian myth while watching The Sword in the Stone as a young child. After the Disney movie, I followed the matter of Camelot through some of the most well known texts, like T.H. White’s Once and Future King and Thomas Malory’s Morte d’Arthur. Reading the feminist retelling of Marion Zimmer Bradley’s Mists of Avalon as a teenage witch was a revelation, and in college I discovered more obscure texts, like Edmund Spenser’s Faerie Queene and the Roman de Silence by Heldris of Cornwall, as well as some of the oldest grail romances written by Chretien de Troyes.

A former student of Joseph Campbell, editor Evans Lansing Smith brings together some of his teacher’s lectures on Arthurian myths and Campbell’s previously unpublished master’s thesis on the Dolorous Stroke. Smith argues that “Campbell’s entire career was generated by his Arthurian studies.”1 The “global, multicultural approach”2 — comparing eastern and western mythopoeic traditions — seen in his famous Hero with a Thousand Faces and the Power of Myth is evident in this book.

Joseph Campbell’s Romance of the Grail inspired me to expand my research into the German tradition, especially Wolfram von Eschenbach’s Parzival. Campbell clearly favours this romance, describing it as a “cathedral of love, celebrating the mystery in its many facets,” and praises its author’s depiction of Muslim and Christian knights as equals. Romance of the Grail expands on tropes I studied in Chretien de Troyes’ romances and Philip Sidney’s The Countess of Pembrook’s Arcadia, such as the tension between questing and ruling at home as well as enchantment and disenchantment. I also found many of Campbell’s Arthurian connections to Celtic and Buddhist myths illuminating.

Romance of the Grail’s greatest strength is how it showcases Campbell’s storytelling prowess. In retelling romances like Parzival — which he argues is the “greatest [work] of the Middle Ages”3 — Campbell participates in the medieval tradition of developing, not inventing, stories.4 He also emulates romance narrators in his interjections; conversational remarks like “of course” and “when what do you know” are a modern reflection of 13th century narrators’ remarks such as “or so the legend goes.”

Interspersed throughout Campbell’s 20th century retellings are comparisons between versions of the same, or similar, myths. For example, he elaborates on an idea from Jessie L. Weston’s From Ritual to Romance: the knights and ladies from Arthurian romances are recast Celtic gods and goddesses, and “in all of us, in our human activities, deities are operating.”5 A central concept in Campbell’s analysis of Arthuriana is integrating eastern and western thought, such as connecting Buddha’s temptation of dharma (duty, or the “force of social opinion”) and the struggle that Parzival faces after valuing his knightly reputation over his true nature.6

One avenue of thought that I’ve been interested in since I studied troubadour lyrics in grad school is cross-cultural poetic influence. Campbell’s discussion of how Eleanor of Aquitaine’s grandfather — William IX of Poitiers, “the first of the troubadours” — brought Moorish love poetry traditions with him from the Iberian Peninsula to French courts7 reminded me of my desire to seek out Moorish or Sufi poetry. I’d like to send more time studying how the tropes of love translate across this border.

Unfortunately, some of the language that Campbell uses is outdated and can be distracting for contemporary readers. For instance, I was occasionally halted in mid-sentence by his use of “Oriental,” as in “great scenes of Oriental crusade.”8 More offensive is the repeated use of “savage” in his master’s thesis (an appendix of over 60 pages in Romance of the Grail), written in 1927, before academia acknowledged the racist implications of the term.

His master’s thesis also includes some passages of untranslated French, which is interesting in light of the content in his lectures about how English and French were used by people of different social classes. Campbell discusses how the Normans conquered the Anglo-Saxons, and put them “out in the yard, taking care of the pigs…when food is outside, it’s pig or swine, and when it’s on the table, it’s porc…French indoors, and English out there in the pantry and in the servants’ quarters.”9 Campbell’s lectures are clearly written for a more general (or “outdoor”) audience, while French is used when writing for those inside the doors of the academy.

Throughout Romance of the Grail, the reader will find intriguing examinations of love. Courtly love challenges the political institution of marriage in the Middle Ages;10 amour of the troubadours values personal choice (of eyes or heart) rather than a universal feeling of agape (spiritual love of your neighbour) or the impersonal, physical allure of eros;11 and German minnesingers believed the “power of amor was indeed divine.”12 In Tristan and Iseult, the “pain of love is the sickness unto death that no doctors can cure.”13

Overall, Arthuriana nerds will enjoy Romance of the Grail and Campbell’s comparative study of myths. He includes both esoteric (mystical) and exoteric (historical) readings:14 discussing alchemy and goddesses as well as the medieval corrupted Catholic Church and the court poets of Marie de Champagne.