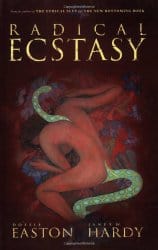 Radical Ecstasy is the sixth book Dossie Easton and Janet Hardy have written together, though the first one I have read by them.

Early in it becomes clear that each have something different to offer, and without the other the book wouldn’t be nearly as strong. Dossie, who usually subs, tends to view things from a more spiritual and Pagan perspective, whereas Janet, who usually tops, approaches the same material from a more secular or agnostic angle. Both are delightfully frank and forthright in expressing their beliefs and experiences.

Radical Ecstasy avoids a dogmatic approach to the spiritual applications of BDSM; the authors write: “we find it easier and more relevant to talk about the process that we use for believing things than it is for us to talk about what those beliefs might or might not actually be.”1 This agnostic approach leaves the reader free to apply their ideas regardless of the reader’s personal spirituality and practice. They also provide one of the best descriptions of ritual I’ve encountered: “for our purposes, ritual can be like a container that defines the mental space we are operating in, and that protects that space, keeping it, and use, safe and inviolate.”2

While the majority of the text is presented from the perspective of both authors, a number of sections are written in first person with the speaker identified by grey Ds or Js running in columns for the length of these passages. Initially I thought this would prove distracting, but I was surprised to find it easy to adjust to, and it is their personal descriptions that really make this book work — not just the hot scenes, but their emotive and spiritual responses to them.