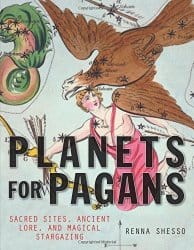 One of my strongest childhood memories is of a night in Mahopac, in upstate New York, lying on a chaise lounge on a family friend’s deck, mesmerized by a sky filled with stars! Where did they come from? To a city kid who saw a mostly dark sky every night, who was enamoured of astronomy at the time, the brightness and number of stars was incredible. This was proof that they really were there for me, too, and not only for some astronomer sitting behind a telescope in a desert or on a mountaintop.

One of the first things Renna Shesso writes – in fact, insists on – is going outside and looking at the sky, even if all you can see are a few of the brightest stars and planets. There is no substitute for direct witnessing, she tells us, and she’s so right. She explains how to identify the constellations and the space between their constituent stars using our hands – no fancy instruments required. This is the way our ancestors did it – who saw quite a bit more in the night sky than we do — and it still works.

Starting with the North Star, Polaris, and working her way through all the visible planets, some constellations and a few interesting star clusters, Shesso presents us with not only the astronomy – where, when and how to find the star or planet – but ancient myths, stories of how they got their names (usually from a god or goddess), and places on Earth that were built to mark their seasonal passing.

It’s a smorgasbord of legends, drawing from Greek, Roman and Norse mythology. I was especially intrigued by the recasting of belligerent old Mars as the Green Man, from the myth of Juno, angry at Jupiter for begetting Minerva (who sprung from his head) all by himself. Juno, the legend goes, held a flower to her breast and through the strength of her desire, became pregnant. “The child She bore was Mars, who inherited His flower-father’s fertile green energies—and His mother’s anger with Jupiter,” Shesso writes.

Mars’ role was originally one of fertility and defence. He caused the plants to grow, protected cattle and fields, and established and maintained good boundaries around those settled places. He fathered Romulus and Remus, who in turn became the founders of Rome. The month of March — first month of the Roman year — is named for Mars, and that season’s earliest associations were with planting new crops. Mars helped with that — via prayers and offerings — and was called upon when divine defense was needed.

A few pages later Shesso makes a passionate case for honouring Mars Silvanus, citing how our cultural divorce from nature plays out in the lack of nutrition in our food and the diminishing natural fertility of our crops at the hands of genetic engineering. Every chapter in the book ends with a section called “Learn by Doing,” and in this one she suggests getting out to a natural area, reconnecting with the spirits there, and leaving offering of thanks. Shesso often guides her readers toward direct experience, not a surprise given her background as a practitioner of shamanic healing, in which direct experience is the only kind that counts.

Planets for Pagans was first published in 2011, and was renamed by the publisher for its current release in December 2014. However, the text was not revised to reflect this, so in a couple of parts it talks in the future tense of the year 2012 with all its various ramifications. Since I thought it was a brand new book, I was disoriented for a moment at these passages – yet Shesso’s theories were entertaining so I didn’t mind time travelling for a bit.

The book includes several appendices with dates and times of selected motions of the planets, a rather long bibliography, an index, and many illustrations throughout. The bibliography is an excellent resource for further study on any of the astronomy, lore or locations that Shesso writes about – but only after you’ve stepped outside and taken a look at the night sky for yourself.