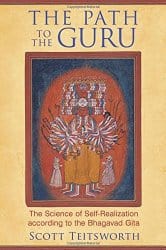 In The Bhagavad Gita, guru Krishna employs a “secret dialectic” with his pupil Arjuna.1 “Teacher and taught begin as polar opposites in whom a kind of osmotic interchange takes place, each stimulating and edifying the other, until they become as one in realization.”2 The oppositional stance Teitsworth takes in The Path to the Guru seems intended to provoke the same kind of response in the reader.

Many points of interest await discovery in The Path to the Guru, particularly in its later chapters. At times my buttons were disagreeably pushed by what I read; at other times I enjoyed learning new facts about the Gita. Teitsworth’s many years of study yield a deep knowledge of the text, and the most valuable part of this book for me was in the secular-style examination of each individual verse.

Like millions of others around the world I have been enchanted by the Bhagavad Gita. I was handed a copy by a jingling, saffron-clad, shaven-headed man dancing joyfully past me on a city street many years ago, and soon found myself unable to put it down. Later it informed my studies in yoga. The title means literally “song of the bhagavan.” Bhaghavan is defined by Wikipedia as a reverential title for “God, an incarnation of God, or God-realised being.”3 In contrast, Teitsworth defines bhagavan as “an excellent teacher.”4 Is the Gita a classical poem, allegorical tale, or holy scripture? Teitsworth argues it is not a religious text, but a scientific training manual intended to “reacquaint us with our inner genius.”5

Hundreds of commentaries have been written about the Gita;6 Teitsworth offers us another. His exclusive focus on chapters 1 and 2 is unique, although emphasis on chapter 2, and omission of chapters, is common. Teitsworth treats the first two chapters as a summary of the greater Gita. We are told that that as the tale progresses, Krishna expands his teachings, finally enabling Arjuna to go forth into battle (and the reader into life) with confidence.

Within the story of the Gita,7 moral and spiritual questions are explored in enigmatic, poetic dialogue. Teitsworth asserts that the purpose is to synthesise opposing ideas and expose their underlying truth. Krishna may be seen simultaneously as Arjuna’s friend, his guru, his God and an aspect of his own self. In the prologue Teitsworth describes him as “a wise elder.” Watching Krishna through Arjuna’s eyes, we are “coaxed out of our state of indecision to live our life with determination and valor, in whatever path we choose.”8

Teitsworth advocates using objective analysis to counterbalance existing religious dogma based on the Gita, saying “well-founded reason is the royal road to liberation.”9 This approach will interest many, particularly as a backlash against historical wrongdoings justified by literal adherence to the Gita as “God’s word.” For example, regarding Hindu caste, Teitsworth emphasises that the “fourfold colour grades” of 4:13 represent different levels of the innate need for freedom, not a racist system of oppression.10

Science is frequently invoked, along with the need for skepticism and the empirical testing of beliefs and values. Through intelligence Teitsworth attempts “to rescue this sublime treasure of liberating wisdom,”11 the Gita, from degradation by a “long line of commentators peddling a sort of Hindu-Christian mishmash.”12

A haphazard layout and opinionated introduction are major barriers to readability. Another flaw is a lack of clear focus on the subject of the guru as promised in the title. “It is helpful to keep in mind that the true guru is a principle and not necessarily a person,”13 and “a guru is a representative spark of the Absolute whose guidance restores the seeker to wholeness”14 are examples of vague explanations.

Passionately atheistic posturing, and dry, repetitive theorising mark the introduction. “Its ironic that the Bhagavad Gita, written in part to discredit the priesthood’s stranglehold on the people of India and religion’s stranglehold on the human spirit, is today worshipped as a religious scripture.”15 There is even a section entitled “Why the Bhagavad Gita is not the Song of the Lord.”16 Teitsworth’s reason for writing the book is that “a nontheistic interpretation is a welcome addition to the literature.”17 I personally found his anti-religious protestations cumbersome and often irrelevant. Curiously, a vehement argument that the Gita holds freedom, authenticity and reason above all else ends in homage to Nataraja Guru (Teitsworth’s guru), to whom the book is dedicated and whose wisdom “has no equal.” I ended the introduction feeling frustrated by unanswered questions.

Who is the guru of the title? Krishna, Arjuna, Nataraja Guru, Teitsworth himself, or ourselves? The Indian concept of a human guru, a priest-like intermediary between the seeker and the truth, seems fraught with potential problems including codependence and exploitation. Some Gita verses say the path to wisdom begins with finding a guru;18 Hindus and Hare Krishnas have their own interpretations of this.19 Because of its title I had hoped this book would throw light on accessing another form of guru: self as an expression of the divine, or Krishna as a representative of truth. But the promise of sharing in Arjuna’s divine connection (a feature of some traditions, for example the Self-Realization Fellowship,20 was disappointed. Teitsworth’s book is “for those for whom a personal deity-concept is not appealing,”21 and he seems not to share conventional ideas about the guru, yet his own definition lacks clarity. Similarly, the path of the book’s title is not discussed fully, except to suggest that the first two chapters of the Gita are a map, and the path is “no ordinary path, but an oceanic state.”22

As with other ancient texts, the Gita’s language can be convoluted, cryptic, and politically incorrect. Translations from the original Sanskrit vary enormously, adding to disagreements over meaning, a sport that can go on forever among devotees of any important book. Teitsworth’s interpretation significantly alters the text’s meaning, and from that perspective one can better understand his emotionally charged protests about other translations. Take his interpretation of 2:55 as compared to, for example, that of Swami Pradhupada in Bhagavad-Gita As It Is (1984), and Winthrop Sargeant in The Bhagavad Gita (2009).

Krishna said: When one banishes all desires that enter the mind, Arjuna, satisfied in the Self by the Self alone, then he is said to be one of well-founded reason.

The Supreme Personality of Godhead said: O Partha, when a man gives up all varieties of desire for sense gratification, which arise from mental concoction, and when his mind, thus purified, finds satisfaction in the self alone, then he is said to be in pure transcendental consciousness.

The Blessed Lord spoke: When he leaves behind all desires emerging from the mind, Arjuna, and is contented in the Self by the Self, then he is said to be one whose wisdom is steady.

“Reason,” “transcendental consciousness” and “wisdom” are obviously quite different things. And does 2:64 translate as “spiritual clarity,”23 “the complete mercy of the Lord,”24 or “tranquillity?”25 Such discrepancies apply for almost every verse.

Equalising both pleasure and pain, both gain and loss, both victory and defeat, enter wholly into battle. Thus you will avoid sin.

Teitsworth’s commentary on 2:38 asserts that “sin” means “not measuring up to your potential,”26 and is only mentioned by Krishna to frame his teaching in a way Arjuna can relate to. A psychological tack is taken in which, interestingly, the guru’s point of view is considered as important as that of the student. “We are being treated to a masterful depiction of a topnotch guru in action… equalisation of both the positive and negative aspects of every situation allows us to wholeheartedly participate in our life… This, as we will repeatedly revisit, is the essence of the Gita’s yoga.”27

“Much of the conflict of human life is directly traceable to being attracted to half of a polarity while rejecting the other half.”28 Teitsworth heavily underlines the necessity of “balancing opposites,”29 a theme that would be one of the book’s great strengths, were it not for his strident rejection of interpretations of the Gita not matching his own. In an earlier essay30 he states that the Gita will transform human perception only “when both science and religion have become mature enough to surrender their turf wars to something akin to the unifying vision of the ancient rishis of India.” He adds that Nataraja Guru alone has successfully revealed the universal meaning in the Gita.31 Less deference to his guru would make Teitsworth’s exhortations about self-determination and avoiding dogma far more convincing, and the supposed conflict between science and religion is overstated, as is the compulsion to find one correct interpretation of a book so ripe with multi-layered meaning. Elsewhere in The Path to the Guru Teitsworth declares that “everything is the Absolute in essence, and so we are all one,”32 but too many dualities had me so bogged in muddy detail I was unable to enjoy any mystical insight.

Despite my difficulties, Teitsworth’s extensive knowledge of the Gita did improve my understanding of many of the shlokas (verses). For example in 2:3, Krishna asks Arjuna, “Whence comes to you this dejection typical of non-Aryans, heaven-barring and disreputable?” Teitsworth presents a convincing argument that Krishna is not making a racist slur, but teasingly testing Arjuna33 to gauge his readiness for receiving unprejudiced instruction.

This is a book of subtle charms, intended for the thoughtful seeker and philosophical intelligentsia. “The Gita gives little credence to prayer and ordinary forms of worship, but it does acknowledge that they are suited to certain types of people and have some value. Contemplation and intelligent reasoning, on the other hand, are accorded the highest respect.”34 If you have the patience and inclination to micro-examine the Gita from this angle, it will be well rewarded by Teitsworth, but “to mine every nugget from the work”35 in this way could be heavy going — especially if voluminous commentaries on the remaining 16 chapters appear in the future.

The Path to the Guru includes two to five pages of commentary for each three-line verse, appropriate when skipping to verses of interest, but dull to read chronologically. Parts of the book would benefit from rearrangement, or redesign as an academic essay. The whole book would work well in ebook format with clickable links so the reader could choose the “unadorned”36 shlokas or go deeper into the commentary, and whether to read the prologue, introduction, epilogue, notes and index consecutively, or not. In an ebook, practical lessons, exercises, images, and cross-referenced links refuting or supporting the views of other scholars could be added for a fresher and more direct experience.

“There are two ways to view the universe: either nothing is a miracle or everything is a miracle.”37 Quoting Albert Einstein, Teitsworth claims the “transcendental view” that both are true. Because of its complexity I don’t believe The Path to the Guru would benefit beginners, but serious and long-term students of the Gita will enjoy it for its unusual and penetrating perspective on a book written about so many times by so many influential spiritual teachers.

The Bhagavad Gita’s timeless power lies in its appeal as a story, and the truths each of us recognise therein. If you haven’t had the pleasure, I would recommend starting by reading a version with as little commentary as possible to let it speak for itself. And as Teitsworth urges, “don’t forget to read between the lines!”38