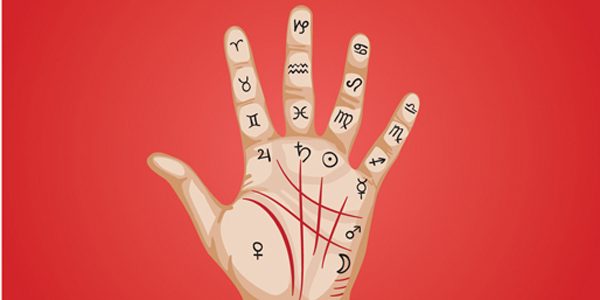 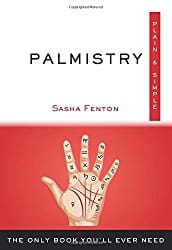 Although most people think they can point out the love and fate lines on a hand, reading a palm is so much more involved than just telling someone when they’ll find “true love.” Sasha Fenton’s Palmistry: Plain & Simple provides an in-depth education in reading palms for a beginner, but it does have some drawbacks.

This is not a very heavy volume, despite how much information is contained in the pages. That being said, right from the opening, Fenton makes it clear that this is not a definitive guide. This book is meant only to introduce the basics to people who are new to the craft. Even so, there are many things covered in the guide.

The book is broken into sections based around parts of the hands such as major and minor lines, fingers, and other marks. It also deals with specific focuses such as love and relationships, and provides information on taking prints of hands to use for reading.

Although the topics are broken up well, the chapters themselves are thoroughly packed with information and a little overwhelming. There were subtopics, but everything is written in paragraphs as if someone is standing next to you and guiding you in person. To me, reading it in that way didn’t convey the information very well, but this style may be exactly what someone else is looking for.

Instead I would have liked to have seen cheat sheets that briefly outlined major points in each section to refer to and work with. There’s a lot of overlap in palmistry as far as meanings go. For example, there are many different aspects of the hand that point to the types of work someone might do, or whether or not they are likely to travel. The way the book is written, this information is provided in short, quick paragraphs that don’t really go into any depth.

I think I would have had a much easier time with this book if it had been broken up by topics such as love, health, family, work, and so on. That way I could use the information to learn single subjects in a more intuitive manner.

One of the things about this style of divination that is very clear from the beginning is that it’s no good to just practice on yourself or only one other person. You have to see a lot of hands to really get a feel for what are, in many cases, very subtle distinctions. This book does have illustrations, but they are all black and white line art. I would have preferred to have more photos for comparison, but Fenton was very clear that you should go out and look at actual hands if you really want to learn.

There are no exercises in this book. There is only the information on what different parts of the hands mean and everything else is up to the reader. In order to really get a feel for how to read palms, you have to actually read them. This book doesn’t “hold your hand” through the process, so to speak.

I found the Palmistry, Plain & Simple a bit difficult to digest, but I think that could be overcome with multiple readings, copious note-taking, and real world practice. Although I had some issues with its layout, my major issues were with some of the offhand comments made in the text.

The book is written to be very conversational, as if someone were standing next to you, as I have already mentioned. That sort of tone can work, and in many cases may help bring a more relaxed feel to a new practice. That said, some of the offhand comments made in this book are really insensitive.

Right from the start, there were gendered jokes made about men being more interested in football than spiritual or metaphysical matters. There was this assumption throughout that the person reading the book would be a woman, and it came off as remarkably sexist to me.

Later in the text there is an offhand comment that certain angles of the thumb joint would be helpful with music,“even hip-hop and rap.” As a person of colour reading that, it gave me pause. It was clearly a throwaway comment, but what was that supposed to mean? Although many people from all walks of life and backgrounds listen to that style of music, it is still associated with Blackness. So seeing that written down, as if those genres of music associated with my culture and history weren’t valid and needed to be vouched for, made me feel — as a woman of colour — like I was not the text’s intended audience.

Despite the fact that the book contains a great deal of good information, those issues really soured the text for me. As I was working through Palmistry, Plain & Simple, they played in the back of my mind and made me question whether or not I would recommend this book.

Ultimately, I think that this book could be a really good starter guide for someone excited to get into palmistry and who plans to really practice and commit to the craft. I don’t think that this is a great resource for someone who just wants to learn a few tricks. I was very turned off by the language in the book, but the information was solid.

Palmistry Plain & Simple is not as plain and simple as the title suggests. It is intended for beginners, but I wouldn’t suggest it for anyone who was just curious, or who wasn’t looking to seriously study palmistry, as the way it presents its information is pretty overwhelming. For someone just looking to test the waters, The Fortune Telling Handbook by Dennis Fairchild contains a section on palm reading that is easy to follow, and goes into more detailed descriptions of the meaning behind palm shape and length. It’s currently out of print, but used copies aren’t too hard to come by; I’d recommend that as a solid beginner’s resource.