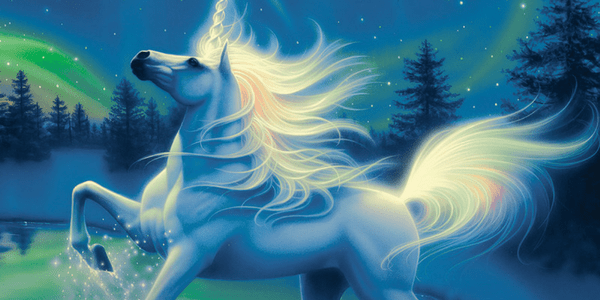 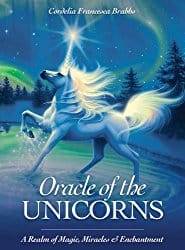 I began working with unicorn energy about five years ago and in this time it has been hard to find an oracle deck that transmutes the majestic energy of the unicorn spirit in a way that allows me to feel connected to the messages of guidance received. To my knowledge, the only other real contender would be Magical Unicorn Oracle Cards, a deck by Doreen Virtue, which always seem to lack the radiance of the unicorn that I was seeking and had hoped would come through in my readings. I am happy to say that Oracle of the Unicorns has truly encapsulated the gracious flow of the unicorn in a way that allows for a channel of divine wisdom to be opened. The deck has so far been a huge hit with my clients, as well as a gently potent messenger for my personal life as well.

There was a calmness that initially came through when I opened the box of Oracle of the Unicorns. It wasn’t one to announce its presence boldly, but rather held a quiet, unassuming feel; the kind of gentle strength behind which must lie true wisdom. It took a bit for me to ease the cards in, and I had to softly introduce myself to the deck. As is common when working with unicorn elemental energy, they can be slow to warm up and a bit shy until they are familiar with your energy. After a few pulls of asking what this deck would like me to know about it, I understood that it was a deck meant to open me to the flow. Ease accompanies this deck and creates a sense of relaxation when reading with it.

The cover is a transcendent blue and green that features a gallant unicorn with its hooves immersed in a lake under a brilliantly lit up sky. The back of the cards is this same blue and green scenery which reminds me of the aurora borealis, lending towards the feelings of sinking into another dimension.

In the Oracle of the Unicorns, the cards are a bit larger than standard, and I initially was having trouble holding them in one hand. Yet, I appreciate the larger size because the imagery on the cards themselves is dazzling. Each card features a distinct landscape and background colour to indicate the time of day. Some cards are a hazy orange of the setting sun, while another features the deep purple of the night sky with a brilliant full moon in the background. There seems to be a holistic conception to the design which allows the imagery to inform the reader based on subtle clues such as the colour, placement of the sun or moon, and pose of the unicorns.

The variety, and splendour of the imagery had me excited as I shuffled through, wondering what I might behold next — some unicorns have wings, while others do not. They are shown in different shades of colour and with their own unique expressions. I was captivated by the expressive emotion conveyed through the unicorn’s imagery.

The Oracle of the Unicorns does come with a guidebook, which makes these cards very accessible for readers of all levels. The guidebook gives a one-page description of the card’s meaning and message. The written card meanings are insightful and truly call the reader to a deep sense of self-reflection. The prompts open space for thoughtful reflection, while still streaming the unconditional healing love of the unicorn. This makes me feel the cards would work best for any querent who seeks honesty, but also values the soft, gentle touch of the unicorn’s deliverance.

I appreciate that the cards aren’t sugarcoated, as some oracle cards have a tendency to be. The 44 cards address both the light and dark nature of things, lending the cards a grounded sense of reality for readings. The other thing I especially like about the deck is that there are three phrases of guidance for each card. For instance, the card Anger has the message, “Safely express your anger. Use anger as a positive force. Honor all of your emotions as sacred.” The takeaway of the pull could be the entirety of all the sentences on the card, yet what I was finding is that when I would pull a card for guidance one of the messages would stand out more boldly than the others, and it was that one which provided the insight or clarity I was looking for. This variation of reading made me feel the cards are able to be played with and worked with in a way which allows for more inspiration and imagination to come through when reading as opposed to being limited to only one message or take away.

Overall, I would highly recommend Oracle of the Unicorns to anyone who hopes to connect with the elemental energy of the unicorn. The gentle, unassuming magnificence of the unicorn’s presence can readily be felt in the imagery of the cards. My experience of working with the cards makes me believe they tap the reader into a space of limitless possibility and childlike wonder. My heart opens when reading with these cards and they are accessible to all levels, making them perfect for beginners or seasoned readers alike. The powerful presence of the unicorns is sure to bring an uplifting energy to those who read with this deck.