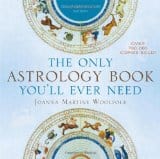 The Only Astrology Book You’ll Ever Need is an updated and revised edition of the 1982 text, now including more depth in the meaning of the signs, relationships, and includes “the latest information about new discoveries in astronomy.”1

Let’s tackle this book based on the title, is it really the only astrology book you’ll ever need? It is a fairly comprehensive text. It covers all of the basics of modern astrology that you’d be looking for: sun signs, decanates, moon signs, ascendants, the planets, the houses, and how to read a chart. All of these sections are well written and informative, though I feel a bit of expansion would be helpful for those with less of a background in astrology, especially near the end of the book when everything was being drawn together in chart interpretation. That being said I found the descriptions of the different concepts fairly reliable and more precise in wording than a lot of current astrology books. Usually the language is a bit more cloudy and vague in an astrology book, here the language is more exact and specific, which is refreshing to see an astrological author willing to put their money where their words are because it’s a lot easier to be wrong when you’re specific rather than hedging with vague language.

An excellent part of this book is the unique astrological tables at the back. The book contains an ephemeris, but not the standard type, but a new and streamlined type that makes calculating an entire chart (just based upon date, not time) relatively quick and painless. Granted an ephemeris is fairly quick too, but the streamlining in this books chart cuts it down to a fraction of the size and is quicker to navigate.

Unfortunately there are things this book leaves out. If you’re looking just to learn about your personality through astrology, this book will be sufficient, but that’s where it ends. When it comes to predictive techniques; solar returns, progressions, transits, and the like, they are covered in this book, but one page for them all together is obviously not enough to do the concepts justice. To be fair I don’t think Woolfolk was trying to do these concepts justice, just explain them and their existence, but even when I’m thinking basic astrology and what I’d want and need to know these techniques are just as valuable, if not more so, than natal chart interpretation.

So this book is not the only astrology book you’ll ever need, and that’s not the only time the book is wrong, and wrong about itself. The author claims “[t]here has never been an astrology book like this. Here is a book that with a few hours of reading will help you to see yourself better, interpret your own chart, and use your chart year after year to understand and predict trends and opportunities”2 and “gives explanations of the influences that are often given scant attention in conventional astrology books: the Moon sign, the Rising sign, the placement of the planets, and the significance of the twelve Houses”3. Alas this lofty boast is quite hole-filled. As mentioned the predictive side of astrology is relegated to a single page, and every basic astrology text I have or have seen mentions the moon sign, rising, planets, and houses. The only ones that don’t are ones that focus on something specific, just a single sun sign, or just romance between signs. This book is far from the unique claim of the author, and the introduction was written for this edition, so it’s not as if we could claim the statement was true in the 80s (which is wasn’t, as two of my intro to astrology books are from the 60s and 70s).

Lastly I have a couple issues with the text. First off, it’s written in completely heterosexist terms, throughout the book it’s constantly stressed that relationships are between men and women, and that’s it. If this were the original edition from the 80s, I’d let that slide, but this was revised for 2008 and thus has shown itself out-dated. The book also makes several factual issues that stuck with me. When looking at Scorpio (as an example) the rulership was listed as Pluto, and nowhere in the section is Mars mentioned. That does make this book unique, every other book I can think of mentions that Mars was the classical ruler, even if Pluto is accepted as the modern ruler. Worse than that (to me) there is bad science. Woolfolk claims that astronomers believe in, and are still valiantly pursuing searches for Vulcan and Apollo, two planets in the inner solar system that we’ve just happened to miss for the last several centuries of examining the solar system with more than our eyes.4 She also quotes Sagan statement that Jupiter is a “failed star” but she says that is because it doesn’t have planets around it, and that Earth, Mars, and Venus used to orbit Jupiter.5 Jupiter is a failed star because it was not massive enough to produce nuclear fusion, her statement is like saying a pile of wood isn’t a fire because there aren’t campers singing songs around it. Admittedly those are just some minor complaints in the scheme of things, but they’re also complaints that I think in the 16 years between editions should have been corrected.

When it comes to this book, I would say if you’re getting into astrology and need a basic book to start, this book will serve the job nicely. If however you have already read a book or two on the subject this book offers nothing unique that can’t be found in any other astrology 101 book.