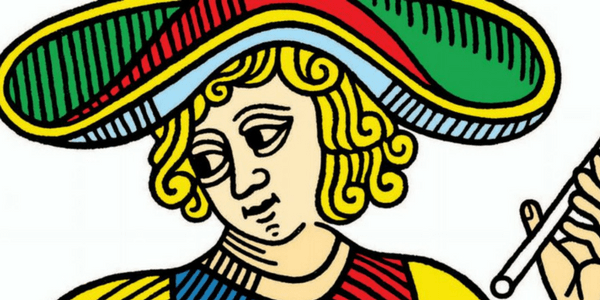 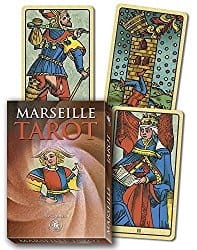 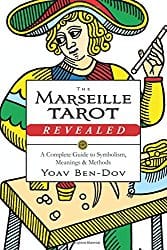 The Marseille Tarot is one of the oldest and most distinct tarot decks in existence. The unique art style and bright colours seem simple at first glance but working with this deck style holds many mysteries for those willing to look a bit closer. I introduced myself to this deck with the Marseille Tarot Grand Trumps deck from Lo Scarabeo and The Marseille Tarot Revealed: A Complete Guide to Symbolism, Meanings, & Methods by Yoav Ben-Dov.

For those not familiar with the deck, the Marseille Tarot is a form of tarot cards popularized by mass production in Marseille during the 17th and 18th centuries. These are not the first cards ever created, but next to Rider Waite Smith (RWS) and Aleister Crowley’s Thoth tarot (both decks heavily influenced by the teachings of the Golden Dawn), these have the most recognizable style. This particular deck was inspired by a deck created by Claude Burdel in 1751.

I looked at the cards first. The deck is oversized and consists of only the trump cards, also called the major arcana. Right away, I knew that the choice to get a separate book was the right one, the little white book (LWB) included with the deck is only about four pages long and includes a basic spread with a sentence for each card. Not enough information to work with these cards in depth.

The cards are oversized which was nice for viewing the full picture. The art was very consistent with what I was used to seeing for this style, which is heavy black lines and bold primary colours. When I began using them, I also noticed a slight gradient that acted as a sort of dreamy shadow on the cards. These also have a textured blue background that likens it to the sky which is different from more traditional sets that only have white or yellowish flat backgrounds. Each card is numbered, but not titled, which is another departure from many decks.

The card stock was very good and although they were quite large, I was able to shuffle them. There was no issue with sticky cards or any misprints. The box was of a good quality, but not very attractive.

I did a small read with these and I found it to be accurate if a bit bland, even when referring back to the LWB that came with the cards. The reading was done just for me as I don’t feel that these would do much for a client read. After all, there are only the majors present, which does not leave much space for clarifying any information.

After playing with the cards for a few days, I turned to Ben-Dov’s book on the matter. 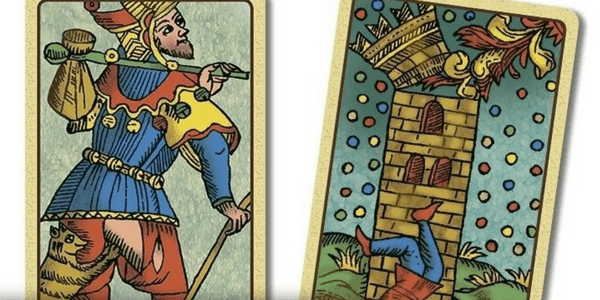 The book was written for a full set (78) of cards and contains far more information than the LWB book, not just in regards to the minor arcana but also to the majors. Ben-Dov goes into great detail when speaking of the cards and the illustrations they contain.

Each card section contains a detailed description which flows through the various meanings of the cards. It focuses on the sort of story of the cards, and breaks down what each card represents both historically, and in relation to the familiar symbols contained on them.

This book was interesting because it has a separate chapter, before the individual cards, which explains the symbolism found on multiple cards. Things like legs, animals, and colours are explained in this separate chapter which, for this deck, was an excellent approach. They provide the reader with basic information which later reinforces the descriptions of the cards when they are engaged alone.

The book brings to light that working with these cards is a very intuitive practice. Although meanings are given for each card, one card may contain drastically different connotations depending on what catches your eye and how you feel. For example, the Wheel of Fortune can be a sign of good things, a sign of ruin, or just a notice that things are changing for you.

The biggest thing that this text provided for me was a new way to look at these cards. Straight from the box, they seemed very simple and basic, but with the added information from Ben-Dov, the various symbols and meanings held within each card became much clearer. I am no novice to tarot reading, but his text added a new in-depth layer to reading these sorts of cards that I had never considered.

For example, due to the illustrative style of the cards, there’s a good deal of line work, and how these lines are presented can be read as a meaning in and of themselves. The lines can represent a hidden or secret knowledge during a reading. This is drastically different for many decks and as such line work does not exist everywhere, and where it does, it is seen as stylistic, not esoteric.

As a personal bonus for this text, Ben-Dov, as it turns out, was taught to work with these cards by one of my favourite directors, Alejandro Jodorowsky and Ben-Dov’s style of reading has been influenced by his teacher. Aside from that though, throughout the beginning chapters there are anecdotes about Jodorowsky that I greatly enjoyed.

The book deals with a lot of upfront history of tarot, which may be repetitive for some experienced readers, but it is important to read the sections specific to the Marseille deck as well as the information regarding the creation of the cards.

The book and the cards

The book added a wealth of knowledge to the cards that I did not get from the LWB (that was sent with the deck), which means that I would suggest anyone picking up this particular deck purchase supplementary material to go with it.

The book uses a different deck, in the same style, to work with so it was interesting to see the differences between the two. At first glance they seem much the same, but upon closer inspection Ben-Dov’s deck is much simpler and brighter than the Lo Scarabeo version.

I tend to think of a majors-only deck as not quite enough, and I have difficulty using them for more in-depth reads. The book, despite being meant for a full card deck, illustrated how to read the cards with only the majors present. When I came back around to the cards after reading the book, I was able to incorporate this knowledge and found my readings to be deeper and more intuitive than they had been previously.

Although the book was not necessarily made to go with this specific deck, as a resource it provided invaluable information for working with Marseille Tarot decks that can be taken forward to many versions of this classic card deck.

As a counterpoint (after learning more about these cards and history), although I think that the deck made by Lo Scarabeo was quite nice and certainly looks attractive, some of the changes in colour and line work detracts from the original and I would like to work with a set that is a bit closer to how the cards were once more commonly printed. Still, I think for curious card readers, this set may be quite nice.

Overall, the book and the deck worked well together. I think that that Marseille Tarot Grand Trumps may just be a starter deck for those who are interested in this sort of tarot card, but The Marseille Tarot Revealed: A Complete Guide to Symbolism, Meanings, & Methods can be a resource for years to come.