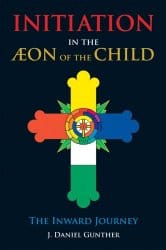 In 1904, Aleister Crowley become the prophet of the New Aeon, declaring the Aeon of Horus, the Child is dawning and that the worlds, inner and outer must change and reflect this. J. Daniel Gunther follows this belief and a century later begins to explore what the Aeon of the Child is all about.

James Wasserman says in the introduction, “In my opinion, this is the most important original work to be published since the death of Aleister Crowley.1 This builds either a high degree of expectation or scepticism, or perhaps both. While I may think that is a bit of a grandiose claim, I did find the book interesting and educational.

For the most part, this book seems written for those familiar with the cosmology of Thelema, yet Gunther starts the book with explaining the Age of Osiris and the Age of Horus, the differences between them, and what changes have occurred and will occur. “For over two thousand years man had perceived his relationship with God in terms of a disjunctive doctrine that placed God above and outside man.”2 While that is a simplification of religion (and ignores much of the traditions of Asia) it serves as the foundation for the idea of the Age of Osiris, but now in the Age of Horus, the Aeon of the Child that changes. God is not external, God is not above, God is Man, and Man is God.

From there Gunther moves the focus to the basis of the New Aeon, what it means for humanity and the spiritual world. As the Aeons change, so to is magick supposed to change, the most well known example is L.V.X. as the keyword of the last Aeon, and N.O.X. as the keyword of the current Aeon. Gunther explores what this change is, what is symbolizes and how it is used. I would have liked to hear why this change occurred other than the Aeons shifted. He continued into the idea of the messiah for this Aeon, and what they might represent.

I found this book very intriguing, as a growing fan of Crowley it is nice to see a work that is based in his system, but unlike so many is not a direct derivative or collection. Gunther even lets himself challenge some of Crowley’s beliefs and mistakes, point out that: “If we are to truly understand the progression of the Aeons, it must be done by studying empirical evidence, not by static adherence to traditional interpretations. The Method of Science cannot be hamstrung by the Aim of Religion.”3

I found at a few points it was very unclear who Gunther was writing the book for. It is filled with complex symbolism and theories from the Thelemic system of magick, that even as someone who has been reading Crowley and Thelemic books, I felt a bit lost, yet 170 pages into the book, he feels the need to point out that Thelemites do not worship Satan. I can’t imagine someone who may think that, understanding enough of the book to make it that far.

For those interested in the philosophy of magick, especially the cosmology put forth from Crowley and Thelema, this book will be an amazing read, and hopefully as Gunther plans it will be the first in a series of works.