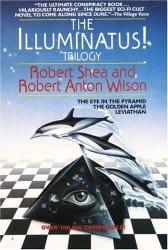 Robert Shea and Robert Anton Wilson combine a multitude of conspiracy theories, ’60s hippy culture with a conservative twist, and an odd writing style intended to cause the reader to incidentally deconstruct their ego by blurring the distinction between whose perspective they’re writing from. There’s a bit of required reading; if you don’t know much about Freud and Carl Jung, and the occult, for example, you’ll miss out a lot of what is said in the book. Starts losing pace about half-way through and ends in a whimper.

RAW goes on to write obscenely boring sequels based on it. It’s hard to say whether he’s advertising for the GOP, the A.’.A.’./, Aleister Crowley, Libertarians, or all of them. Definitely an FNORD. You’ll definitely get your money’s worth… if you steal it.