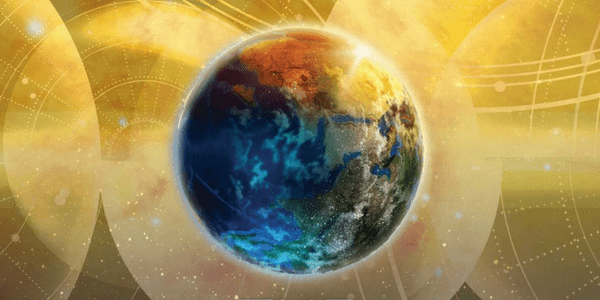 Could be it true that the planetary alignments in our cosmos are actually the original and most well-orchestrated symphony of all? In his latest book, The Harmonic Origins of the World: Sacred Numbers at the Source of Creation, Richard Heath illuminates ancient mysteries revealed within megalithic monuments such as Stonehenge. This sacred knowledge was passed down through generations, encoded within the greatest tales of human history, such as the Epic of Gilgamesh and the Hebrew Bible. In this thoroughly researched book, Heath tells the intricately woven, numerological story of the harmonic matrix of our world. His research spans time and culture to resurrect ancient awareness, presenting the planetary world of harmonics as the key to understanding spiritual and physical life on Earth.

The reader should be forewarned that the material presented in the book is not easy to comprehend. The terms Heath uses are extremely technical, and without a thorough understanding of both music theory and complex math, such as geometry and calculus, one may be left scratching their head for the good majority of the book. Rigorous math hardly ever turns me away from quickly picking up an idea, but I had to read each section over quite a few times to even begin to grasp its concepts. One of the few critiques I have of the book is that Heath in no way simplifies or provides adequate explanations for the sake of making his findings accessible to the average person. Extreme concentration and dedication to understanding the material are prerequisite to fully absorbing what he presents in The Harmonic Origins of the World.

The book is divided into three parts. In the first section, Heath lays out how the moon is the measurement of all things in modern time. He connects the movement of the moon as a standard mathematical measure of length to the building of megalithic monuments. Through studying the lunar year in regard to the synodic cycles of Jupiter and Saturn, a pattern of harmonic ratios begins to emerge. The basis of these patterns are prime numbers that then build “holy mountains,” or tables of matrices, physically manifest in the form of pyramids, and which have harmonic intervals between vibrations or tones used to connect to Heaven. In this way, “Musical tuning theory became associated with religion for reasons greater than being used as a convenient acoustical metaphor. Harmony was obviously considered a well-developed cosmological model of the world and it process.”1

From this point, Heath describes the harmonic procession of the Earth, within detailed holy mountain matrices, explaining how the building of pyramids were a physical way to comprehend this harmony in a two-dimensional form. There is also evidence from the ratios found within the Sumerian culture, in the emergence of Adam and the god YHWH, in the design of the Parthenon, highlighting the mathematical calculations of intonation, physically embodying the harmonic ratios on Earth. It is in this way that patriarchy was set in motion, through harmonic framework within physical foundations.

Harmonic aspects are explored as well through tales of Homer and the Rig Veda. Heath even goes so far as to explain the resurrection of Osiris within the realm of harmonics. Through time, the matrices of the planets have served to further human evolution and consciousness, with each phase building upon the next. One can see the shifts through time in the way humans relate to the sky through their religious practices and artwork, carefully preserving the planetary harmonics in encrypted stories and cultural artifacts.

In the physical world, things that vibrate can relate to each other harmoniously when they are coupled and sympathetically resonant, just as vibrating piano strings cause collateral vibration in neighboring strings. Harmony is therefore a type of systems theory in which vibrations can feed backward and forward between resonators. Systems that can vibrate like strings can take on harmonic intervals towards other strings that then vibrate through resonance rather than through being struck. It is this idea of relatedness within systems that underlies how harmony can operate beyond musical performance, between instruments and voices, between planets. 2

One very fascinating topic brought up by Heath is that we have become focused on the physics of space, while for much of history, through the use of astronomy and planetary harmonics, the focus was on the physics of time. By learning to understand time as our ancestors did, through this ancient wisdom, we have a much more accurate understanding of the development of consciousness over time. At this point in history the human mind has become separated from nature, yet there is reason to believe that reconnecting with planetary harmonics would redefine cosmological identity to reorganize the human mind back into alignment. Heath writes, “it is highly likely that the human mind includes that part that can receive harmony, perhaps because the heart (not the physical heart but a spiritual centre) is the true organ of knowing, as the Egyptians insisted.”3

My favourite part of the book is where Heath writes about the Olmec culture and the harmonic design of their city Teotihuacan, which was the largest city in the pre-Columbian Americas. They had their own counting system that used a different time calendar than we do now. Reading how they structured their time, featuring the harmonic difference between the synod of Saturn and Uranus, created influential time periods of eclipses. Looking at the harmonic foundation of their culture also provides insight into the practice of human sacrifice at the time of eclipses. Their mythology of the Feathered Serpent, Quetzalcoatl, evolved through this time-tracking system of planetary harmonics.

Overall, The Harmonic Origins of the World is an absolutely fascinating book. It is complex, but the daunting amount of information serves as a call to rethink the evolution of consciousness. I recommend this book for anyone looking to expand on their knowledge on how planets affect the world, how math tells its own story of creation, or for anyone who wants to consider the ancient understanding of consciousness viewed through time. The depth of information provided by Heath will be sure to satisfy the curious mind.