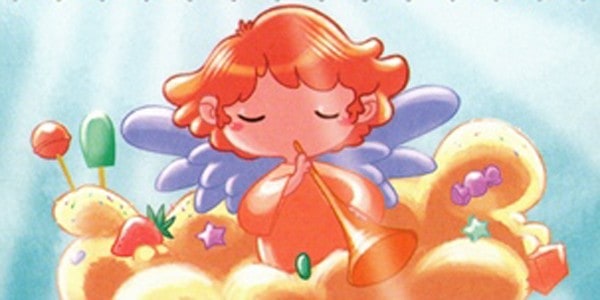 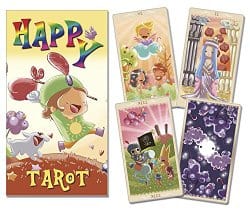 Serena Ficca’s Happy Tarot is a full 78 card tarot based on the Raider-Waite-Smith style. Each card features a colour illustration that interprets the classic imagery into a much gentler, softer version. More than anything, this deck is adorable and extremely Judeo-Christian friendly.

The first thing you see when dealing with tarot decks is the cards themselves, which is to say, the artwork. This deck is no different. It is obviously illustrated with younger readers in mind. The people are done in a very cartoonish, almost chibi style with large heads and short, stunted bodies. The scenes are landscapes full of candy and sweet treats with softly glowing skylines. Every card is non-aggressive, even the “darker” or “more negative” cards. Cards that are traditionally less positive at first glance still have a very cute tone, cutting a lot of the foreboding. For example, The Tower — which does include the traditional imagery of a burning tower falling while lighting strikes it — doesn’t have quite the same bite when the people resemble dolls more than they do actual humans. Similarly, the 10 of Swords looks more like a kid that had too many goodies than it does a fallen solider.

Even so, the deck is very well illustrated. Both the major and minors have full illustrations, and despite the cute bent of the work they maintain all of the same basic imagery. The suits are a bit different; the cups are bowls of pudding, the wands are candy canes, and the swords are wooden, maintaining the inoffensive childlike imagery.

That being said, the Rider-Waite-Smith cards do have solid foot in Christian mythology when it comes to the images that are displayed, especially in the major arcana. There are crosses, allusions to the story of Adam and Eve as well as depictions of angels as commonly influenced by Christian dogma subtly inserted into the art. However, something about the style of these cards has made these images more overt and noticeable. 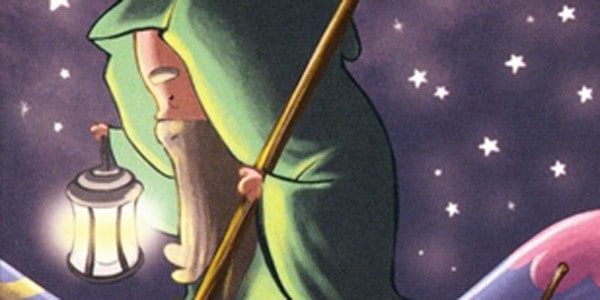 Many of the characters are clothed in outfits reminiscent of a child’s Christmas play. Long robes, headpieces, etc. The very simple art style makes it look more like a costume and less like actual clothing. This theme of very simple, bold art plays throughout the deck. This downplay of the details actually provides a stronger impression as the image isn’t filled to the brim with information. Only the most important symbols have been transferred over, so the use of certain Christian iconography is more apparent.

A dive into the LWB (little white book, the pamphlet included with the cards) shows that that this deck isn’t called Happy Tarot just because of the cute art. Everything about this deck is focused on achieving happiness. The LWB encourages its readers to use the deck to help them find happiness and have fun. The meanings of the cards are fairly standard, the only difference in the book is that these are focused strongly on the positive. In fact, each meaning is accompanied with a short line on how you can use that card to “find happiness.” In case it’s not clear, the Happy Tarot really wants you to find happiness.

The real question is, however, how do these read? I did a few quick readings (one- and three-card spreads) to get a feel for the cards. Despite the childish images, the readings were solid. I even used the LWB to double check and still ended up with the same or very close interpretations.

Because of the art style, it’s hard to read anything too heavy with these cards, which is both a positive and a negative. If you are trying to get a deep reading to really guide someone, these cards will probably not work well. However, if you’re just giving readings for, well, fun, these are great. 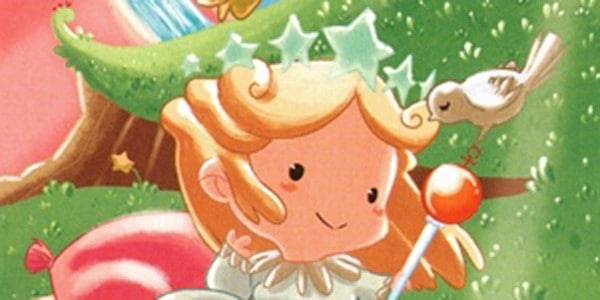 Initially I looked at these as a possible starter deck for young readers, and I think they would work very well for that purpose. The images are clear and easy to read; they’re not very adult so it’s easy for young readers to digest. Upon further use of them, I also think that they would be a good set for beginning readers, especially those coming from a Christian background, who may not be comfortable with the idea of tarot yet. I also would recommend this deck to professional readers to have in their collections, as it’s great for reading for a younger audience.

Overall, Happy Tarot is a solid tarot deck. Do not dismiss it because of its cartoon art. Despite it’s cute exterior, it maintains a strong connection with its source, therefore making a welcome addition to any card collection, or a great option for newbies trying to learn the craft.