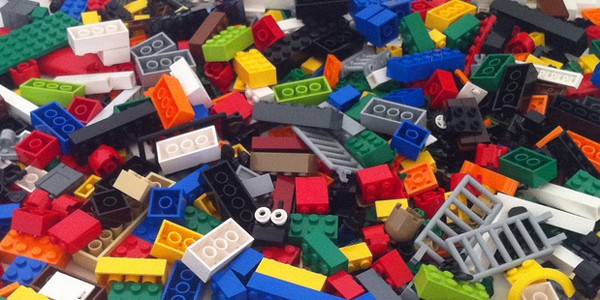 One of my favourite things about doing pop culture magick is that you get to literally play with toys as a legitimate part of your magical practice. Toys come in just about every shape and size these days, so there’s something to fit almost any magical need. Plus, toys have the bonus of passing under mundane radar so they’re a great tool to use when something more overtly magical can cause problems. One of the most easily obtained, inexpensive, and versatile toys to use in magick is Lego.

The best thing about Lego bricks is that you can use them to create almost anything. When I was a kid I remember Lego bricks coming in a big red bucket and you used them as an outlet to let your imagination run wild; I made everything from magical castles to lightsabers to abstract art all with those little plastic blocks. These days not only can you get giant buckets of random blocks, but kits to make everything from the Empire State Building to dragons with levels of complexity ranging from giant Duplo blocks to the tiniest of intricate architectural details. The possibilities of what you can create are limited only by your own creativity.

Lego and other toys are a great way to do magick that’s hidden in plain sight. Not every workplace is friendly to the burning of incense, hanging of mojo bags, or other overt signs of magick.  In fact, I’m not sure they exist outside of magick shops.  However, almost every workplace and school is tolerant of a few Lego or actions figures on a desk, locker, or break room.  Even if all you’re allowed is a Lego minifig on a keychain, it’s something.  The ubiquity of Lego means they’re allowed just about everywhere, thus you can take a powerful magical tool just about anywhere and keep it in plain sight.  The biggest challenge I’ve found in using Lego magick in public is keeping small children from playing with them.  However, most kids are pretty understanding if you explain things to them nicely.  Use your common sense and decide how best to keep your magick safe and still visible where you need it.

Traditional spell components (herbs, stones, roots, etc.) are generally selected for their color, energetic correspondence, size, availability, and personal resonance.  Lego bricks are more of a blank slate.  Basic Lego bricks come in just a few sizes, shapes, and colours.  The base size and shape doesn’t really impart anything to your magick, though your colour choices can.  The real magick begins when you start to combine and create new shapes from the basic blocks.  As you build with your Lego, your intent flows from your mind down into your hands and out into your blocks.  The patterns and shapes you ultimately create become deeply imbued with your energy and intent, making them powerful spell components that can be used in almost any way you can imagine.  As a bonus, once you’ve finished you can disassemble your creation, wash the blocks in a little salt water, rinse, and dry them and then they’re ready to be used again however you see fit.

Lego kits, gears, electric components, and minifigs can also be used in magick.  I am a big fan of using Lego kits for magical works for two main reasons.  One, I like having a set design from what I’m building.  I find it easier to focus my mind and keep on track rather than panicking about what block to choose next.  Two, a kit has blocks that are already shaped, sized, and coloured to create a particular result: they want to become the thing you’re building.  This can energetically support your working as long as you’ve chosen the right kit.  Minifigs of people, trees, animals, and so on, can all make it easier to create a clear vision for your magick to inhabit.  Use whatever enhances your intent.  If you’re a bit more adventurous you can use electrical or robotic components to further enhance your creation.  If you’re doing a spell for moving stagnant energy, why not use moving components to really make the energy flow?  You really can do just about anything with building blocks.

Magical Lego creations can also be enhanced with the addition of traditional spell components.  Just because you’re making magick with building blocks doesn’t mean you can burn incense appropriate to your intent while doing so or that you can’t add an appropriate stone to your Lego creation.  A powerful way to combine Lego magick with traditional magick is to create a hollow object with your blocks and fill the cavity with traditional spell components.  For example, to do a spell to help motivate you to save for a down payment on a house you can create a house out of Lego bricks and fill the inside with some bergamot, a few bay leaves, a goldstone, and a high john the conqueror root.  That would give you the personal empowerment and focus of building the structure with the energetic support of the herbs and stones inside it.  If your spell is something fairly permanent, you can write an incantation right on your blocks with a sharpie, custom paint them, or cement them in place to intensify your spell.  Pop culture magick and traditional magick can play quite nicely together if you let them.

With so many options available to you it can be challenging to know where to begin.  A great place to start, and one of my favourite ways to use Lego in magick, is to create a spell focus. By spell focus I mean a physical object that serves as a proxy for an intangible or unreachable target or serves as a physical housing for spell during the duration of the magick. In traditional magick, things like candles, stones, and herb pouches are often used as spell foci.  Let’s look at a specific example of using Legos to create a focus for a protection spell. 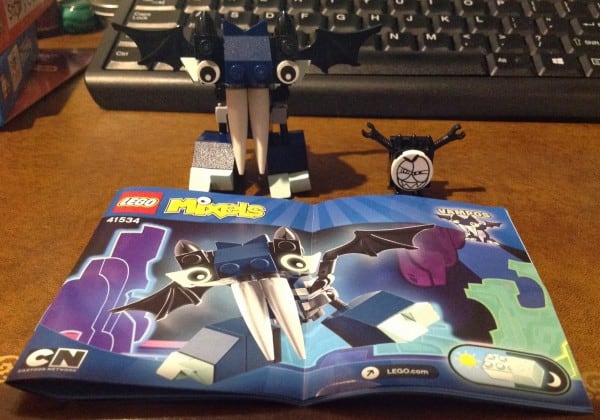 I like using Mixels for this, there’s something appealing about having a friendly monster as a guardian.  You can also use kits for creating dragons, unicorns, lions, knights on horseback, or other protective creatures.  Choose a kit that appeals to you visually and whose end result you feel would be capable of providing the level of protection you want.  You’ll want a kit whose complexity corresponds to the strength you want from your completed spell.  A 15 minute kit would not house as much energy as something that took two hours to build, nor would it last as long.

For example, I have the Vampos Mixel kit and I used it to create a guard dog spell.  The creature itself is winged and can move fast, it has glow in the dark components so it can see in the dark, and it has exceptionally large teeth to scare off interlopers.  It took about 15 minutes to build; long enough to get energy to be an early warning system but not enough for it to fight off intruders.  If a kit is not in your budget you can either create something free form or find plans online to create something out of blocks you already have (note, you can find tons of Lego bricks and other building blocks in used toy stores for very reasonable prices).

Once you have your blocks and a plan for what to build with them, take some time to write out exactly what you want your spell to accomplish.  For my guard dog spell my intent was, “For one moon cycle, to alert me to any incoming dangers, physical or metaphysical, with enough time for me to be able to do something about it.”  If I wished to renew the spell I would have to disassemble, cleanse, and reassemble the blocks.  It’s important to always give an explicit finite life span to any spell that can work independent of your will; rogue spells are no one’s friends.

Also, you should name your creature.  What you are building is a trusted friend to help you and it deserves a name of its own.  You may choose to create a custom sigil that can be inscribed on your creature once it’s built.1 It is far easier to empower a named creature than one that is merely an abstract concept.  Further, if you intend to renew the spell over time you will create a far stronger creature by essentially resurrecting the same spirit over time, rather than starting from scratch each time.  This is how fully function thoughtforms are born, so be certain your actions are fully in line with your intent.

Next, lay out all your materials and instructions so that everything you will need it at hand.  Take a few moments to ground and centre, and think about your intent.  If you are using them, this is the time to light a candle and some protective incense.  If you have music that makes you feel particularly protected, feel free to play it quietly (I find the soundtracks from superhero movies or Lord of the Rings particularly appropriate).

Finally, it’s time to build your creature.  The most important thing to remember is to build mindfully.  Keep your intent in mind as much as possible as you build.  Keep the creature’s name or sigil in mind as you build.  You may choose to put a little protective essential oil on your fingers to work into the blocks as you build (be careful with slick small pieces!).  This process is no different to building a clay spell housing, except it’s not quite as messy and uses a more thoroughly modern building material.

Once you have finished constructing your creature you should formally empower and seal your spell.  I like to do this by holding the finished build in my hands, standing at my altar, and formally introducing the new object to my patron deities and verbally restating the creature’s name, purpose, and life span.  If that doesn’t feel quite right to you, just seal your spell however you normally do so (e.g. saying “As I do will so mote it be,” clapping your hands three times, drawing a sigil on the object, etc.).  Then, set your new guardian either on your altar, at the front door, or the heart of your personal space to do it’s work.

Once your object’s allotted lifespan has run, give thanks to the energies that have done your will and respectfully disassemble your blocks.  I like to give them light wash in salt water (adding a bit of soap if you’ve anointed them with essential oils), a thorough rinse, and then a light towel dry before putting them away to be used again at a later date.

The possibilities for using Lego blocks in magick is just about endless.  You can make tools, spell components, energy housings, spiritual representations, the stars aren’t even the limit.  Let your imagination run wild and you might just find exactly what you need for your next working is already sitting in a bucket in the corner of your closet.  Go make magick!