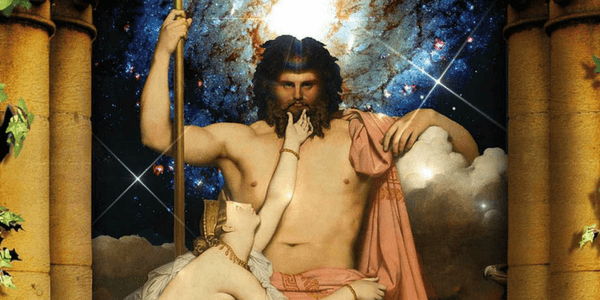 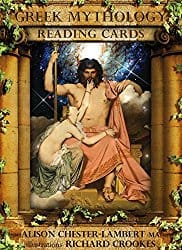 The Greek Mythology Reading Cards draw on artworks depicting classical Greek mythological figures, and presents them in an easy to shuffle and spread oracle format. The artwork on these cards is comprised of digital collage art drawing from a variety of periods — ancient Greek and Roman to Renaissance to those from 19th-century — in a variety of mediums, such as sculpture, painting, pottery, sculptural relief, and others. The images are in the public domain, and, as such, they’re not always crisp, but Richard Crookes has provided the original artist, title of the work, and year it was completed for each, so that those with an avid interest in seeing the larger works can do so.

In the accompanying booklet, Alison Chester-Lambert recommends drawing three cards and reading them together, with the first card representing the querent. She also suggests using 10 cards in the Celtic Cross formation for more detailed spreads. Though more specific instructions are not included in this brief booklet, there are countless sources for divination spreads, and perhaps at this point it’s not necessary to repeat the same information in every new booklet.

Each card is titled and has a keyword associated with it. The booklet contains a brief note on each figure or theme depicted, and suggestions for interpretation. For instance, Metis’ keyword is “wisdom,” which makes sense, as this is attributed to her, though often in the form of cunning. The booklet’s accompanying text on her is brief, and I would have appreciated a broader interpretation of her character and how if functions within myth, perhaps with suggestions for where to find more information in the sources that have survived. For comparison, I also checked the card of my namesake, Psyche, whose keyword is “doubtfulness.” This I had more trouble with, as in Apuleius’ Golden Ass, Psyche’s doubt instigates her trials, but from there she embarks on a quest and fulfills the hero’s journey in a way that no other mortal woman has, according to what survives from ancient Greek mythology.

Reading through the cards and arriving at problems with my favourites from the mythology might be expected, especially as there are no set, unifying myths, and mythological innovation with these figures predates the few surviving texts we have. Ok, then. How do they work in practice, when doing a reading, for example?

I did a three-card spread with the intent of finding out what the cards wanted me to know about them. The cards I pulled were Hestia (“inner fire”), Artemis (“goddess of light”), and Eros (“desire”). The booklet’s description of Hestia focuses on her association with holy fire and the sun, and it suggests that I may find respite at home, and in rituals that focus on inner peace and contemplation. In this conception, Artemis is also associated with light and the sun, and I’m to take messages of “generosity, benevolence and prosperity, which [I] should receive with humility and reverence.”1 Eros represents sexual passion, though the booklet allows that it may also represent a “powerful intensity and great passion which could be unleashed to create your heart’s desire,” which I rather like. All in all, it’s a very fiery reading.

If I were to read these cards based on my familiarity with Greek mythology, I’m not sure I would take the same approach as the booklet. Hestia’s hearth and home aspect strikes me more firmly than what’s presented here; though the depiction of her on the card is fiery with counterclockwise flame sunburst behind her, the pose isn’t one I’d associate with respite. With Artemis, the statue depicted shows her running forth, hunting dog at her heels, and the crescent moon on her crown is shining, suggesting a more active approach to matters. The statue of Eros on the card shows him embracing Psyche, who reaches up to receive his kiss. A bow and arrow has been superimposed, outside even the frame of the card, pointed right at Psyche’s heart. The sculpture has a balance to it that is betrayed by this addition to the imagery, which adds a layer of inevitability to the circumstance presented.

Here I’ve drawn cards that all depict marble sculptures, and perhaps something can be read into that as well. Would the meanings change if the figures were depicted on canvas? As frescos? On amphora? For those with a background in art history or archeology, this could be an interesting dimension to add to the reading. Those with more familiarity with the specific scenes depicted, such as with the cover image of Zeus and Thetis and its significance within the Iliad will have more draw from, and consider when contemplating the images.

I like the idea of Greek Mythology Reading Cards, but it could benefit from a more expansive companion text that gets into what’s depicted on the cards from both an art historical and mythological perspective, which would allow readers to tease out more from these cards. That said, the cards themselves are interesting, and worth playing with.