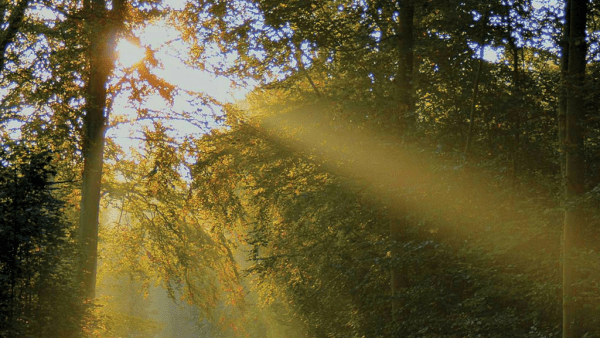 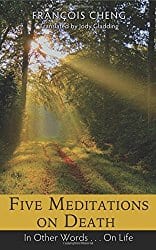 When I requested Five Meditations on Death by Francois Cheng for review, I imagined that it would be five guided meditations around the concept of death. It isn’t, but I was not disappointed. The word “meditations” is used here in the more contemplative, philosophical sense. This is a small but very intense book, consisting of four essays and a section of poetry exploring the way in which humanity’s awareness of death can impact on our lives.

Section one focuses on the issue of death awareness, and how the presence of death defines life as an experience. Section two explores what death can tell us about big, existential issues — the nature of existence, of deity, forms of life after death, and the desire for transcendence. Part three is about beauty and evil, and part four explores the idea of soul. The fifth part — the poetry section — takes the concepts of the preceding sections and renders them in this more creative form, weaving together all the threads:

When the oriole’s song suddenly falls silent,
Space is filled with things that die.
The long cascade of a waterfall
Opens the rocks at its depths;
The valley is listening and hears the echo
Or heartbeats immemorial.1

I read the book one section at a time, doing each section in a single sitting, and only one section in a day. It is a dense text — it may be small as a physical object, but the richness of ideas and the concentration of language is remarkable. It’s something to read when you have time to really give it your full attention. I found it necessary to leave considerable gaps between sections so that I could digest the content. It’s a book to read more than once.

Author Francois Cheng is Chinese by birth, but has lived and written poetry in France for much of his life. He’s able to draw on a staggering array of thought — religious, philosophical, and literary — and pulls all these threads together with ease and grace. Here the ideas of Eastern philosophy meet the writings of Europe, making a fascinating read for anyone interested in comparative religion. Various cultures, ways of seeing, ways of thinking about the world are juxtaposed, but presented in a way that doesn’t require you to be an expert in anything before you start reading. If you like having your mind stretched, this is a fantastic book that will stimulate your thinking in all kinds of ways.

The underlying premise of the book is that death frames life, and to think about death is in fact to think about life. This the author does, with warmth, humanity and compassion. It’s a very gentle and affirming sort of book in terms of the author’s voice. As an expression of humanity, it will uplift and encourage. Death might be a frightening subject for some, but this is not a depressing or distressing text. Much to my surprise, it turned out that the author is a Taoist — something I had no idea about when I first picked the book up. His own poetry has the unmistakable cadence of Taoist writing, and it’s a personal background that seems to help him be open to and curious about other paths and ways of seeing and being.

Five Meditations on Death is quite a heavy book. I don’t think it’s for everyone, but for readers who like deep thinking and a lack of easy answers, it is a very rewarding read.