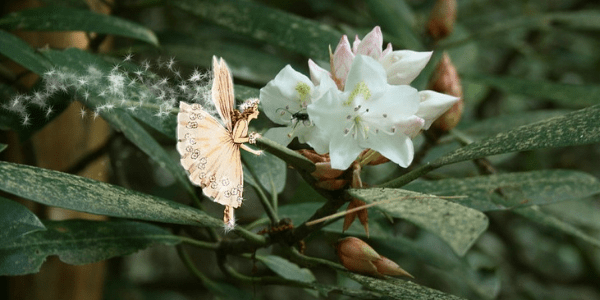 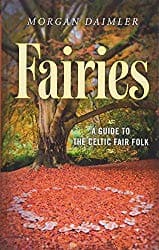 Morgan Daimler‘s book Fairies: A Guide to the Celtic Fair Folk gives insight on the history of the Celtic fae and how it is possible to work with the Fair Folk, with words of warning sprinkled in for good measure. Daimler does not sugar coat the fact that the Fair Folk are not what most people think of when the fae and pixies are in mind. Typically, one thinks of Tinker Bell from Peter Pan or the sweet Hallmark image of a faery with flowers. According to Daimler’s guide, the fae are neither totally good nor totally bad, rather it depends on what kind of day you catch them on that will determine your fate. Daimler shows why many of our fairy tales are cautionary ones when working with the fae.

Fairies have to be one thing or the other, because being so small they unfortunately have room for one feeling only at a time.1

Fairies focuses on the Celtic fairy lore, though various forms that can be found around the world. The lore of the Fair Folk are so entangled with the Celtic lore and culture that it is difficult to not interact with the fae on some level if working in Celtic magick. The Fair Folk seem to be possible deities from the older regions of the islands of Scotland, Ireland, Wales and England or even once living kings and queens lost to history.

Daimler brings up the various theories as to what the fae may actually be. As mentioned, she writes how many are possibly older deities that got downgraded due to the rise of Christianity and the loss of the tales over time. Others may be cursed humans that died and are now working off debt or vengeful for the wrongs caused to them in life.

The Victorian age reshaped the view of these nature beings that travel between life and death, into a happy twinkling sprite that can grant wishes or lull our children to sleep. It’s far more likely that a faery would steal the child and leave one of there own then anything else. This is not to say that the Fair Folk are something to avoid or that one should not work with them, but working with them should be undertaken with caution. They are not humans and certainly do not follow the same rules and etiquette we do. What we might think as a slight annoyance, to them, it may be a great injustice to one’s character.

There are many different fae kings and queens explained through the book. One king, named Gwyn ap Nudd, was once a Welsh God of the Underworld and eventually became a Underworld fae, or child of the Underworld, and goes out with a fierce pack of hounds like the Wild Hunt. It seems fae or human spirits seem to blur depending on the story, so having Fairies as a reference to possible Fair Folk interaction would help in the realm of spirit communication.

Daimler writes how the unseelie and seelie court, a division between fairy types and kingdoms, is shown to be a possibly more recent divide. The unseelie seem to make up the more solitary fae, such as the bogles, goblins or banshees. The seelie court is more of the social Fair Folk, like elves and the fae. Though, with them, it seems to be an older term that was a generic umbrella for a variety of types of beings. Information on the fae is too often simplified to unseelie being seen as bad or dark, where as the seelie are seen as belonging to the happy and light court on the other side.

In the last few years, the Fair Folk have taken on a much more mysterious and smouldering appearance due to young adult and romance novels. So, I really enjoyed when Daimler mentions pop culture and the take on the Fair Folk when speaking about the unseelie court. She notes, “contrary to what most of the young adult novels and paranormal romance currently on the market like to say, the Unseelie Court aren’t the emo bad boys of the fey world who just need a big hug and some understanding.”2 This notion must be set aside if one has any desired to work with the Fair Folk. You are unlikely to come across a brooding figure that needs a kind heart. She also brings up the need to be cautious with what one asks of the Fair Folk. Tales tell of magical beings finding loopholes and play on words when asked to do something — this is not far from the truth, and the fae always  collect what is owed to them.

While Daimler does focus on the darker more solitary fae, some of the ones we think of as helpful do pop up too, like the brownie, which is one of the few that dwell in homes occupied by humans. They are known to have nut-coloured skin and wear old ragged cloths. Think Dobbie the House Elf from Harry Potter. The brownie help with the chores such as cleaning and milking the cows, where they will take a small portion of food or milk for themselves. Otherwise, the home owner would leave milk and honey out for the brownie, but never say that it’s for them or risk insulting the fae. If slighted, which can involve simply leaving out new clothes for them or saying thank you, the brownie will become more poltergeist-like, and cause havoc on their way out, never to return again.

The opposite of the otherwise pleasant brownie would be the red cap, a solitary goblin that dwells in abandon castles and ruins where murders took place, as they are drawn to the energy. They have clawed hands, iron boots, and a red cap dyed in the blood of unfortunate wanderers that came too close to their dwelling. I suggest not trying to give them offerings, and instead to keep clear of places they are known to inhabit, though Diamler mentions rare moments of red caps being helpful to a familiar person.

Everything in the Otherworld is not safe and not all of the beings who dwell there mean us well. Quite frankly it arrogance on our part to think we know more or better than our ancestors or than the cunning folk and wise people who spent lifetimes practicing their skill.3

Daimler gives a nice overview of the various things associated with the fae, including the fairy mounds, fair circles, the lapse in time, the caution to not eat fairy food, and to not thank the fae outright. She also goes into detail about there association with the holidays and seasons. The various stories and rules of the fae seem contradictory at times, but what we know of them comes from a mix of lore written from collected stories, translations, and interpretation. The bibliography also contains recommendations for larger and more detailed lists of the fae.

The Fair Folk seem more frightening than anything, and it makes you wonder why one would want to work with these cunning spirits. “To deal with the Good People in the modern world means finding a middle road between a view that is too fear-ridden and one that is not respectful enough,” Daimler states.4 These Fair Folk roam and rule over the sacred grounds and can be a great ally in making that connection with the woods, mountains, streams, and the other places they dwell. To know how to give them due respect is helpful, and they can help one acquire more insight.

Daimler explains how to deal and work with fae in one’s a personal practice. Recommended practices include giving offerings of butter, milk, and honey. She suggests keeping your space clean, and to never underestimate the fae, since they have been around for longer than us. Indeed, Fairies: A Guide to the Celtic Fair Folk would be a good starting point to see if you and the Fair Folk would get along. Daimler has written several other books that are specifically tackle working with the fae on a magical level, such as Fairycraft: Following the Path of Fairy Witchcraft and Fairy Witchcraft: A Neopagan’s Guide to the Celtic Fairy Faith.

If you work with spirits of any type, Fairies would be a good book to read, since often the dead and underworld go hand in hand with the fae and their kingdoms. Some of the solitary fae that could be connected to the unseelie court are often warnings of death or even collectors of the newly dead. Banshees can be connected to a single family for generations, warning members when someone will pass with a horrible wail. The dead and fae seem to come together often, as they dwell in similar locations, such as fairy mounds that could also be burial spots, abandon structures like old castles, and sacred groves.

Fairies: A Guide to the Celtic Fair Folk gives a nice over view and blends both the folklore and modern take on the fae. We cannot completely sure who or what the Fair folk are — some could be spirits, gods, or embodiment of nature. Their blessings should not be taken lightly, for they can be snapped back just as fast — and replaced with something unpleasant.