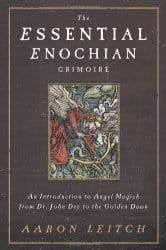 Considering everything that has been written on Dr John Dee and Edward Kelley’s Enochian system in the last century and a half, one can’t help but wonder what could be considered “essential” for an Enochian grimoire. Where does one start? What is included? Which Enochian systems? Which elements? Leitch admits this was a challenge when sorting out the material and decided “[i]t must present a simplified overview of the entire system, thereby allowing the student to see the whole proverbial elephant before focusing on the trunk, ears, legs, or other elephantine components in detail.”1 Again though, with all that Dee wrote, and all that has come since, a simplified overview is not an easy task.

The focus of the text is “Dee-purist Enochiana, meaning it will not borrow material from any of the sources that came after the man himself passed away.”2 Personally this is exactly the type of book I’d want. There are neo-Enochiana books galore, but very few focus on just Dee’s work, without the later synthesis of the Golden Dawn, and while I don’t have issues with the Golden Dawn adaptations of Enochian materials I would like to see them as they originally were. Unfortunately when you exclude the appendix and introductory material the ratio of Dee-purist against neo-Enochiana becomes 13 to 8, meaning really the focus is less than two thirds of the text.

That being said, the material included is excellent. The introductory material is probably the most complete history I’ve ever read in a single source, focusing far beyond our favourite duo of Dee and Kelley, giving a dozen pages of biographies on lesser known figures important to the Enochian tradition, such as Albert Lansky and Count William of Rosenburg. The history of the tradition is explored in stages, text by text, as things evolved and changed with the work of Dee and Kelley. Too often the history of Enochian magick paints a picture that it come down fairly complete (or incomplete according to some Golden Dawn traditions), but in this text Leitch explores the process of the Enochian system, including how it changed and was reinterpreted as Dee worked with it, and how that continues up to the present day.

This book lives up to its description; it “provides all the details you need to perform the ceremonies.” I do feel though that the ritual instructions could use a bit more fleshing out, especially in a text that is claiming to be “an easy to read manual.” While they are enough to use, sometimes they need a bit more thinking through to understand what is required, which isn’t unusual for a classic grimoire, but seems unusual in a modern text. For instance, when explaining how to use The Book of Loagaeth, the reader is told to use a ritual from the previous chapter, to put a certain image on the front of the book, but said image appears more than 100 pages earlier — it would have been easier if the reader was pointed to it directly, or if it had been reproduced. To make matters more challenging, it is explained that for working the text, you need to handwrite a copy, translating the letters from English to Angelic and writing them right to left.3 Unfortunately, the text is not in that chapter, nor anywhere else in the book, so if one wants to use it one must look elsewhere, which counters the idea that it proves “all the details.”

I feel that if the book had actually focused more on the Dee-purist material with less space given to the neo-Enochian workings it would have been a lot stronger, and a more complete text.

I don’t think this text would function as a standalone introduction into how to do Enochian magick for someone with no background, but for those with some familiarity with the system, or willing to cross-reference with another book, this book contains all the basics. While this isn’t the only book you’d ever need to really get working with Enochian magick, it’s probably the closest to one out on the market.