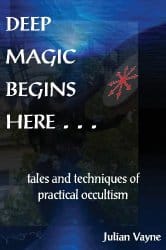 Julian Vayne has written and contributed to eight books, and writes regularly for the always excellent Blog of Baphomet. His earlier book, Now That’s What I Call Chaos Magick, co-written with Greg Humphries, is one I regularly recommend to budding chaotes and those who want to get a feel for what chaos magick is really like.

Deep Magic Begins Here carries on from where his previous solo effort, Magick Works, left off, though apart from the first essay, a familiarity with the previous book doesn’t seem to be a prerequisite for enjoying this one. (At least, I assume so. I haven’t yet read Magick Works, and I managed just fine and had a lot of fun with this one.) Though somewhere between Magick Works and Deep Magic a “k” seems to have dropped from the title, but it’s usually present within the text.

Like his previous book, Deep Magic collects essays, various talks, lectures, anthology pieces, rites, rituals, and choice posts from the aforementioned blog. The topics typically centre on chaos magick, gender fluidity, Buddhism, and other wonderfully diverse subjects. There’s the material from a six week online course on witchcraft that uses Paul Huson‘s Mastering Witchcraft as a source text. An essay about a psychic dolphin called Snorky who visits participants in a ketamine rite, reminiscent of the ayahuasca lizard god. Another on psychogeography, which recounts his experiences and offers suggestions for those interesting in pursuing it in a magical context. Each piece is a surprise and a delight, even when delving into darker subjects like ritual mutilation.

Some of the essays have a confessional aspect, and many made me laugh out loud. In one ritual, Vayne describes a group dressing as stereotypical witches with a theme of hags and harlots. The sabbatic rite reaches fever pitch with the application of “flying ointment.” Typically flying ointment is made with some combination of belladonna, aconite, henbane, datura, and other noxious ingredients, but rather than risk killing anyone, Vayne instead mixes toothpaste with green food colouring, which merely tingles a bit when smeared on the body. Being a chaote, the power here is in belief; Vayne tells the ritual participants he was giving them the real stuff, and that it had “homeopathic traces of traditional ingredients present,” and that they should trust him. Bloody chaos magicians! I love it.

Another essay delves into Aleister Crowley‘s three schools of magick detailed in Magick Without Tears, white, black and yellow, and recasts them respectively as the Tigger, Eeyore and Pooh schools from A.A. Milne’s classic Winnie the Pooh series. It’s effective, and perhaps more easily relatable than Crowley’s alignments, and does for magick what Benjamin Hoff’s The Tao of Pooh does for Daoism.

For all my love of Vayne’s work, not all essays are equally spectacular. As with any compilation, there are a few duds. One kaleidoscopic attempt tries to somehow weave together Freemasonry, the Knights Templar, and LSD with all the usual conspiracy theories in a rambling essay on gnosis. It’s confusing and unnecessary, but need not detract from the enjoyment of the rest of the book.

Like NTWICCM, Deep Magic Begins Here is written from a place of intense and varied experience — it’s magick lived. Julian Vayne’s chaos magick is in many ways different my own, but I’m glad he chooses to share it with us, and I’m always excited by sense of possibility he elicits with his work.