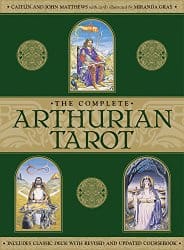 This intricate set of tarot cards was first introduced in 1990, and was the first Arthurian tarot deck. Caitlin Mathews was trained in the esoteric mystery traditions through schools founded by Dolores Ashcroft-Nowicki, Dion Fortune, and Gareth Knight. She is also an acknowledged world authority on Celtic Wisdom. John Matthews is a historian, folklorist and author, who has written more than 90 books detailing the Arthurian legends and grail studies. The couple have combined their expertise in the creation of the Arthurian Tarot, which adds to the riches of Western esoteric heritage. In their words:

Our inspiration for this tarot is the quest for the Hallows, or “holy things.” These are the Regalia of Sovereignty, the Goddess of the Land — she who grants the kingship. These ancient treasures may still be sought, not as museum artifacts, but as spiritual empowerments that align us to our soul’s vocation.1

The Arthurian Tarot is a very high quality book and card set that is nicely packaged and presented in a well-designed box. The cards are printed on quality, durable stock with vivid designs. The card designs are detailed and inviting, and they depict the essence of the grail mysteries. This deck differs from traditional tarot decks in that the suits of the minor arcana have been changed in keeping with the symbolism of the Hallows. So instead of the sword, wand, pentacle, and cup, we have the sword, spear, stone, and grail. The traditional icons of the major arcana have also been adjusted to incorporate Arthurian characters, for example, the High Priestess is now the Lady of The Lake, Strength is Gawain, and the Magician is Merlin. Each card’s image is bordered with a black frame which gives the reader the impression of looking through a window into an alternate realm. The images themselves are intricate, vibrantly coloured and have great depth, which facilitates a detailed reading.

The book which accompanies the Arthurian Tarot is not merely a guide to the meanings of each card, though in-depth interpretations are included. It is a workbook which guides the reader, whether expert or novice, on a personal grail quest called the Hallowquest. This is a meditation course designed to be spread out over a 12 month period. The course is divided into five parts. The aim of the first part is to enable the reader to prepare for the esoteric journey, while the subsequent four parts comprise the course’s seasonal sequence, which is intended to be started at the closest solstice or equinox.

For those readers who are not yet ready to embark on the Hallowquest, the book also outlines five Arthurian Tarot spreads: Prydwen’s Anchor, designed to give an overall summary of a current situation; Mabon’s Gate, serving the purpose of creating a lucid pathway to a personal goal; Pathways of the Quest, a spread that presents a general overview of your life; The Lands Adventurous Spread, a 15 card tableau intended to be read like a storyboard; and the Shield of the Soul Protector, a spread to provide guidance in times of strife.

I was attracted to this deck because of my fascination with the Arthurian legends and their characters, though my knowledge of them was only rudimentary. The moment I began using the deck, my knowledge of the Hallows deepened, and my appreciation of their esoteric and spiritual symbolism grew. Although I have not yet begun the Hallowquest, I have been working with the cards on a daily basis. I have found that the best way to get to know the Arthurian Tarot well is to shuffle the deck for a few moments and then draw three cards. A reading of the trio provides insight and gives purpose to the day ahead while also introducing the themes and nuances of the legends behind this deck. I have also found Mabon’s Gate spread useful for making business decisions and the Pathways of the Quest spread informative regarding exploration of the inner self.

As a tarot reader for more than 25 years, I find this deck a refreshing turn from the tarot tradition. Most of the major arcana tarot are renamed, while the minor cards follow the traditional pattern of the four suits, they feature landscape scenes based on actual British geographical locations. I would recommend The Complete Arthurian Tarot not only to tarot readers interested in divination, but also to those who like to use vivid imagery on which to meditate and to inspire creative thought.