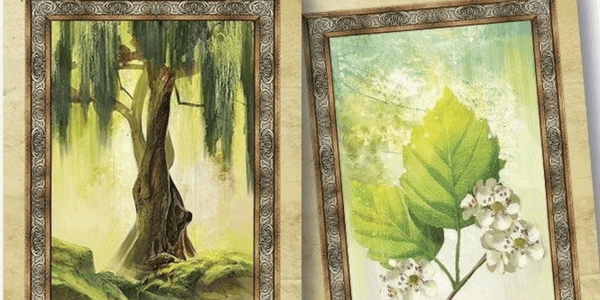 Oracle cards sets are many, but in case you’ve not used one, here’s how it works: There’s a set of illustrated cards — numbers of cards vary according to the whims and priorities of the creator. Alongside the cards, you usually get a little book on how to use the cards for divination and interpretations for each card. Usually one person comes up with the concept for the cards and writes the book, and someone else does the illustrating. The Celtic Tree Oracle entirely fits what you might expect from a set, and is of good physical quality. It is robust and will survive being used. This set is based on the idea of tree wisdom, and uses ogham (more on that later). The trees are European, but the accompanying notes have a strong American bias. Tree lore and ogham feature in modern Druidry, but this card set is not particularly in a modern Druid  style.

I have very mixed feelings about the Celtic Tree Oracle. I loved the cards themselves, but I feel uneasy about the book that accompanies them. Let’s start at the beginning. The author asserts that “This deck is based on the ancient wisdom of the Celtic tree alphabet.”1 The trouble is that the set is based on tree ogham, which is one amongst many possible ogham lists. Ogham definitely existed as a mediaeval listing and writing tool, but its purpose and origins remain mysterious. There are some arguments for it being older, but the case for it being ancient tree lore from our Celtic ancestors owes more to the imagination of Robert Graves (he of The White Goddess) than any other single source.2

We are also told that “the development of the ogham system is usually credited to the Druids.”3 This is questionable at best. We know so little about the ancient Druids that confidently attributing anything to them is risky. The author also makes reference to the Celtic Tree Calendar as though that’s an actual historical thing and not very likely just the work of Robert Graves. Just a few minutes with a search engine can give you far more insight into the history of ogham and the issues around it than this book does, which is disappointing.

Each tree has a page in the book, with a black and white version of the card, a correspondences list, keywords, an overview, card meaning the right way up, card meaning reversed, and a message from the tree written in first person as the tree. There’s a strong American bias in the list — which makes sense if you are in America, but does not have anything to do with the ancient Celts. The author has a curious habit of pairing ogham words with tree names, so we get “Straif Blackthorn,” “Duir Oak” and so forth. I admit to finding this odd to read. The more usual convention is that the ogham word is the word for the tree (although sometimes it isn’t… another complexity of ogham). The other oddity is that we have 24 plants, and the sea. I think the sea is there because of what’s in the ogham lists, and the ogham lists are not a tree alphabet. But at the same time, most trees don’t get on with the sea at all. I found it an odd presence in the mix.

However, the cards themselves are fabulous. They are smaller than most of the decks I’ve worked with, and so are a nicer fit for the hand. Sturdy, with a simple Celtic design on the back, each one has an utterly beautiful evocation of the tree on it. I love the art; there’s a warm, feel-good quality to it. Each tree is depicted in a way that would help you recognize it — leaves, trunks, fruit, flowers sometimes alone, sometimes in combination. I can’t gush about the art enough — it’s glorious. Each card also shows the ogham symbol, the regular use name of the tree, the ogham word and, most usefully, a number. Often, the thing that makes an oracle most unwieldy is trying to find the entry for the card you’ve picked. Numbering the cards solves this neatly and makes them a good deal easier to use than other sets.

I’ve worked with oracle cards for many years. The best sets offer you the kinds of prompts that can help you think about your life from different angles. My preferred sets reliably provide me with material I can use to consider my issues. I don’t ascribe this to my personal gift for divination, but to the skillful writing of card meanings that creates a high probability of relevance. Having worked with the Celtic Tree Oracle over some days, I find they’re not giving me much I can use. I think the assumed user is fairly young in their craft and not far down the spiritual path. They’re also someone comfortable with the language of “your highest good” and “consider what you must collect in order to manifest your goals and aspirations.” The tone is more New Age than Druid, more self-help coaching than deep Paganism. It will work for some people, certainly, but it didn’t work for me.

I wouldn’t recommend using the Celtic Tree Oracle on its own or letting this be your starting point for ogham work. However, I would heartily recommend picking it up as a meditation tool, and using the cards alongside your other tree work to help deepen your relationship. If you’ve more of a New Age inclination and are not really fussed about the history of your tools (historical source, after all, is not proof of usefulness), and you want a tree oracle, it could work for you.