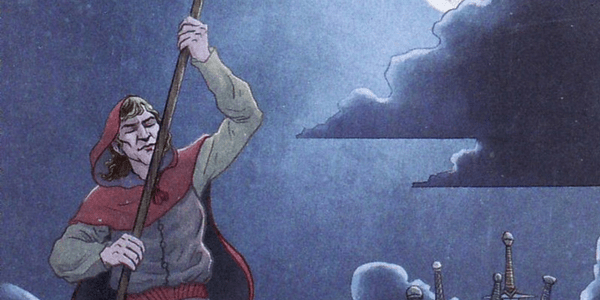 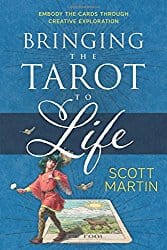 If you are a student of tarot, new or experienced, who wants to go a little deeper with the cards. If you want to build a rich and satisfying practice based on how the cards relate to and interact with each other. And, if you are willing to step a bit outside the box of traditional forms of tarot study to do so, Bringing the Tarot to Life by Scott Martin is the book for you.

Scott Martin is an actor and director — with years of stage experience — as well as a long-time student of the tarot. His own interest in tarot is less about divination and more as “an instrument for life coaching through the lens of psychology.”1 It is through this lens that he recognized that he could bring together psychology’s “study of human behavior” and the theatre’s “illumination of that behavior by representing it on stage” by applying the same methods that actors use to explore a character to understanding the cards of the tarot.2

The book is broken into three sections: the first contains written exercises, the second is a series of group theatre games, and the third contains images from Llewellyn’s Classic Tarot along with brief descriptions of the common meanings of the cards. Most of the exercises in the first can be done alone, while the exercises in the second require at least a small group of participants to be effective, but a few exercises might be adapted to solo exploration.

The book approaches the tarot cards as individual characters. Section One helps you to explore each of these characters more intimately. Some exercises such as Personality Inventory, in which you pick a card and explore more than 40 possible personality characteristics for the card including age, political affiliation, worries, life obstacles, physical posture, etc., could take you on an hour’s-long exploration of each card. I Am What I Do, instructs you to list each card and what profession you imagine that card would have. This will not take you as deeply into each card, but will give you an interesting understanding of how the cards might relate to one another. How would the Ten of Pentacle as a family counsellor relate to The Knight of Cups as a poet for instance?

Section Two will require that you have a few adventurous friends. If you are a student of theatre some of these exercises, or theatre games, may be familiar to you. Group Introduction: The Fool’s Traveling Companions, is a new twist on the picnic game you may have played as a kid. (Bob went on a picnic with Jane who brought apples. Bob went on a picnic with Jane who brought apples and Sam who brought a bottle of soda, etc.) but instead of Bob it is the Fool who is on a journey and the items brought are based on other cards drawn from the deck. As each person says their name and what they brought, it will also serve as a nice ice breaker should you be working with a group of new folks.

Other games include Character Driven Plot, a storytelling game where the group builds the tale based on cards that are turned over one at a time; The Interview, similar to the game twenty questions where one person is a card and the group has a set number of questions they can ask before guessing what the card is; and Tarot in the Park, where one person becomes a card and other members of the group engage them in small talk, “How would Death talk about the weather?”3 Each theatre game includes a section called Reflection that asks questions which may be used for group discussion or to help the individual participants process what they learned in each exercise.

In the introduction to Section Three, Martin encourages those who use the book to come to know the cards and what they mean to them personally. He even suggests making notes on each card’s page in the book so that you may keep track of what you learn about each card. Each card in the deck has its own page and a one or two paragraph description of the card’s meaning.

I found Martin’s writing style very down to earth and conversational in tone. The instructions he gives for each exercise are clear and easy to follow. The exercises themselves could be worked through in order or you may choose any one of them to do on its own. The group exercises might be used for intents beyond learning the tarot. They would make great ice breakers for new magical groups, exploration for ritual theatre groups, or just fun games to play with a group of friends.

Bringing the Tarot to Life provides a fun and unique way to explore Tarot cards and forces us to step outside of just viewing them from a more intellectual perspective. By coming to know the cards as characters, with their own personalities, we come to a better understanding of how the cards relate to each other and to ourselves.