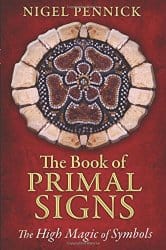 Understanding signs and symbols, at least to some extent, can be an important part of many people’s practice. The Book of Primal Signs: The High Magic of Symbols by Nigel Pennick takes an in depth look at many common and uncommon symbols as seen in today’s modern world.

The Book of Primal Signs is not a casual read. The tome is academic in nature, and, as such, the writing tends to be quite heavy and dense. There’s a lot of information contained in not so many pages. The text itself is only 200 pages long with an additional 30 paid to the bibliography and index. It hits on large, familiar symbols such like the swastika and the common runes while still paying attention to lesser known images like the checker. Pennick spends equal time discussing the history and usage of all symbols in both the magical world and in popular culture.

The strength of this book isn’t how it handles known symbols. The information on the common symbols is fairly standard as far as their meanings. The text does delve into the history quite a bit which was, for me, a good deal of new information, but not necessarily anything that would help me in my practice. This history may be beneficial to others who are looking for a more historical connection or are just interested in that sort of information. Where this book really shines is the way it handles lesser known symbols. During the introduction, Pennick explains that there are symbols all around us and the book does a good job of looking into those. For example, I live near Pennsylvania Dutch and there are different symbols and patterns all over the place. One of these is the hexflower which is discussed in the text. Prior to reading this, I had no idea there was any meaning behind it. I thought it was just a decorative flourish.

If you’re looking for a book that discusses symbolism to help further your practice, then this is not the book for you. The symbols are discussed from a historical vantage point not from a spiritual one. Any information given regarding the use of them in practice is given as historical, not, for example, as a how-to. It’s not really an interpretation of their meanings only that these are the meanings that different people have placed on these symbols in the past.

The history it gives is interesting and fairly in depth. I would have like to have seen more focus given to the lesser known symbols as some of the more common ones tend to have much larger sections. The heart, for example, had a great deal of attention paid to it in the text, whereas the yin yang was given much less space. However, the swastika is given a great deal of attention in the text. It’s mentioned heavily in the introduction and then has a multipage section dedicated to its history and usage. Understandable because it has a very torrid history in western culture. Still, it would have been nice to have some of that space go to beefing up the information on other symbols, such as the pineapple.

As it is so academic and based in history, it misses opportunities to draw the more casual reader in with light-hearted references to modern practices. A little more space and time dedicated to some fun symbols would have made this a much easier read. That said, this is a very well written reference book for people interested in the history of symbols or how they may have been used in other settings besides the altar, so to speak. The table of contents is clear and the index makes any information fairly simple to locate.

It would have been nice to include some colour photos. It does have quite a few pictures, at least two for every symbol that is examined, however, they are all black and white. This isn’t a problem for drawings as they were likely black and white to begin with. For the actual photographs, they tend to be a bit harder to read, and would have been much clearer and useful had they been in colour.

It does present many symbols, a good deal of which are often overlooked in day to day life, but it does not give any information of what to do with that knowledge or how to really use them in your own practice. To me, this book would be better classified under art history than spirituality, and as such I would recommend it for those looking for information on the history of different signs.

The Book of Primal Signs: The High Magic of Symbols has a good bit of useful information, and would make a helpful addition to any library as a supporting reference book.