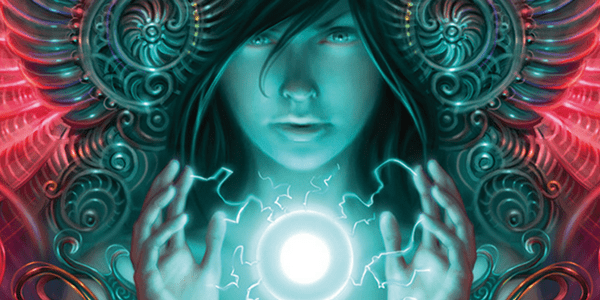 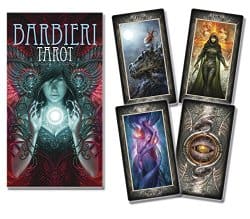 Paolo Barbieri is an Italian artist renowned for his vibrant and provocative fantasy paintings and illustrations. People who are familiar with his work will recognize the depth and passion of his style in the Barbieri Tarot. The deck is comprised of a standard size tarot deck printed on quality stock and a pocket-size booklet written by Barbara Moore, which gives a brief interpretation of each card and  a sample spread. Like a traditional tarot, the Barbieri deck is divided into major and minor arcana. The four suits are chalices, pentacles, wands and swords.

The cards each have a colourful image surrounded by a black frame on the front. The back design depicts a double-headed dragon and a mechanical looking eye. The illustrations are lifelike depictions of people within a fantasy setting. For example, Justice is pictured as a beautiful, winged brunette, dressed in armour. In her hands she holds an upright sword. The Knight of Swords is a woman wearing leather armour, astride the neck of a masked dragon. She brandishes a sword above her head. In something of a cyberpunk style, the Six of Pentacles shows a young man clad in leather and metal being propelled through the air by a jetpack; in the background, a dragon is destroying a building. When it comes to the appearance of the cards, they have a dark, mysterious tone that is very appealing. Many of them also have a sensual quality that adds to the overall feel of the deck.

If you are familiar with the tarot and the traditional meaning of the cards, you could simply do a reading from the cards directly. The major and minor arcana are both clearly numbered. However, if you make your interpretations using the booklet, you will find that the meanings of the cards have been changed significantly to suit the tone of the deck. For example, the Two of Wands depicts two ape-like monsters with bared teeth. One of them wields a weapon above his head. The interpretation is

We yearn for the sun, we hunger for warmth. Our fears fight to the death, to pull us down, to drown our spirits. But we fight and struggle because our desire to live and to be is stronger than our fears even though we sometimes weary of the battle.1

Although this is a variation on the traditional interpretations of the Two of Wands — ambition, hard work, relationship challenges — there is a depth of meaning here that relates to inner turmoil and enlightenment. That is a theme carried throughout the deck, as many of the cards take on an introspective element.

The symbolism in the Barbieri Tarot, while not of the traditional kind, is present. There is also a strong narrative running through the deck, for example, in the four aces.

The Ace of Chalices depicts a green-eyed woman with red colouring on and over her lips. The interpretation reminds us to look for the reflection of our soul wherever we can, and when we find it to love and nurture it, to give it a new beginning. If you look for the reflection of your soul in this card you may see connections with nature, passion and communication, depending on which aspects of the card you focus on. The Ace of Wands depicts the head of a dragon, another common image in this deck. Behind the dragon is a dark, cloudy night, below him is a blazing fire. This card reminds of the primordial fire in our bellies and to let its warmth inspire our soul. The Ace of Swords depicts an ornate silver sword with an orange dragon worked into its hilt. It reminds us to take care with new beginnings and not to cause damage with a double edged sword. The Ace of Pentacles depicts a staff with a dragon ornately wound around it. At the top of the staff is another dragon encased in an amber orb. This card reminds us to grasp new opportunities as they are presented, and not to let the moment pass. The common thread between these cards is new beginnings, and the narrative links the reader to his or her inner psyche and how that is reflected in the outside world.

A sample reading called the Mirror and the Guide Spread is provided in the booklet. It is a clear and effective spread for reflecting upon the self in a certain situation, and how it may be improved. I performed this reading for a friend who was concerned about some issues she was having within her long term relationship. The placement of the cards and the cards that were revealed in the reading — mostly swords — made her realize that she was being overly aggressive with her partner, which was leaving him feeling intimidated and resentful. The reading also indicated that when she sought the root of her aggression she would also find a resolution. She took this message on board and made an effort to be more understanding with her partner and her relationship returned to how it used to be. The reading also helped her explore her own psyche, a predominant message in the Barbieri Tarot, and analyze what was happening in her life that was making her feel so aggressive. She realized that frustration at work, where she was feeling underappreciated, was making her feel angry and resentful. Several days after this realization she was offered a job from another company and promptly accepted it.

The Barbieri Tarot is a good deck for both novice and experienced readers, as well as tarot collectors. If you enjoy dark fantasy illustrations, and are looking for a tarot with a different, introspective twist, this could be a solid choice.