People who have a living attachment to various practices and symbols have a right to reclaim, to ask that they are not used or misrepresented. This idea isn’t really up for discussion so much as the question of it if is still possible for them to pull back the tradition once it has been released into the sea of “pop culture,” so to speak.

The swastika is a dramatic example of this but there are plenty of other examples we can look at. Right now, Indigenous people are fighting back against the use of the term “spirit animal” to be shorthand for “I really like this thing,” such as, “This pizza is so good, it’s my spirit animal!” or “Grumpy Cat is my spirit animal.”

The use of this term has been adopted into current culture and although it is not a physical thing that can be seen or held, it still has a very real meaning to many Indigenous cultures that its popular use has tried to divorce it from. The issue with that it turns a living practice into the butt of a joke.

That’s an example of a very specific group of people but even spiritual practices that can be adopted by anyone falls prey to this issue. If we look at Buddhism, much of the imagery and practices have been co-opted by popular culture as decoration and faux spirituality.

You can find reproductions of statues in furniture shops, sold as decoration, images on t-shirts, and Buddhist philosophy served as bite-sized bits of wisdom on inspirational posters. Yes, there are many Western people who practice Buddhism mindfully but it is also fair to say that the west has turned the representation for this Eastern practice, as well as a host of others from that region, into a design choice, not a religion. 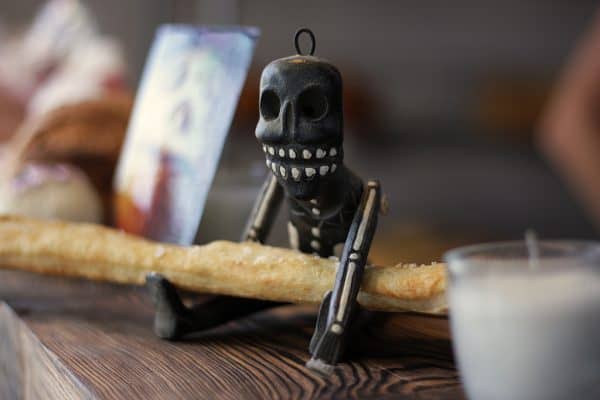 Sometimes the issue is that people simply do not realize that something is still a living practice due to cultural differences. Lately, there has been a rise of using Dia de Muertos imagery as a stand in for Hallowe’en because of the similarities between the two. People may know the reasons for the practice and its history but mistakenly think it’s akin to the commercial version of the Hallowe’en holiday.1

This is a cultural practice that is being misappropriated due to its proximity to another, existing cultural holiday. Because of this, it is extremely hard for people to untangle the two, now that it has been viewed a fun way to paint your face for a party.

Obviously, these are still very much live spiritual practices but much like the idea of spirit animals to Indigenous peoples, they have been very removed from their culture of origin. Although a Happy Buddha on your desk may perk you up when you’ve been having a bad day, people who practice that belief system have just as much of a right to ask that their religion and culture not be used as decoration.

Although it may seem unfair because some spiritual symbols and practices have taken on a second life in terms of how the majority of Western views them, this does not mean that they don’t still mean something and have an important place in their original cultures and practices.

One thing that Indigenous people have been doing is using the internet and social media to spread awareness that using the term spirit animal in such a way is harmful. Simply spreading the message that something is hurtful to the original group is helping to raise awareness and pushing back against further appropriation of it.

The biggest tool that people have in trying to reclaim those symbols and practices that have been appropriated is information. Speaking up against the continued appropriation is the first step and can help to reverse some of the harmful effects of appropriation. Allies are also using their voices helps as well, however, this likely will not be enough to reclaim these images completely.

As depressing as it is, some things simply cannot be fully divorced from their appropriation. With work and time, spirit animal can fade into the annals of the Internet. People can be brought to the understanding that decorating your house with religious symbols when you don’t follow that belief is tacky and that painting your face for a cultural practice that you aren’t part of is in poor form.

But sometimes things have become infamous, as is the case with the swastika that opened this piece. There is no way that you can completely reclaim that image. Even as just a geometric pattern it causes people to question the designer. But this does not mean that people of Hindu belief should not be allowed to display this symbol as it relates to their belief system.

Although it has become a symbol associated with Nazis, displaying it in the way it is regarded in the Hindu religion and having those images shared and normalized would go a long way to helping it be viewed as more than just a sign of hate.

Reclaiming symbols and practices after they have been appropriated is an uphill battle. Once something has been appropriated, there’s this sense that the symbol, practice, what have you, belongs to everyone and it ignores the significance that it holds to existing groups. People have the right to reclaim their culture and we should support them in that by expanding our understanding and listening to their needs.